This Week's Duggar Recap Has A Creepy Dad, A Boring Shower Game, But Still No Josh 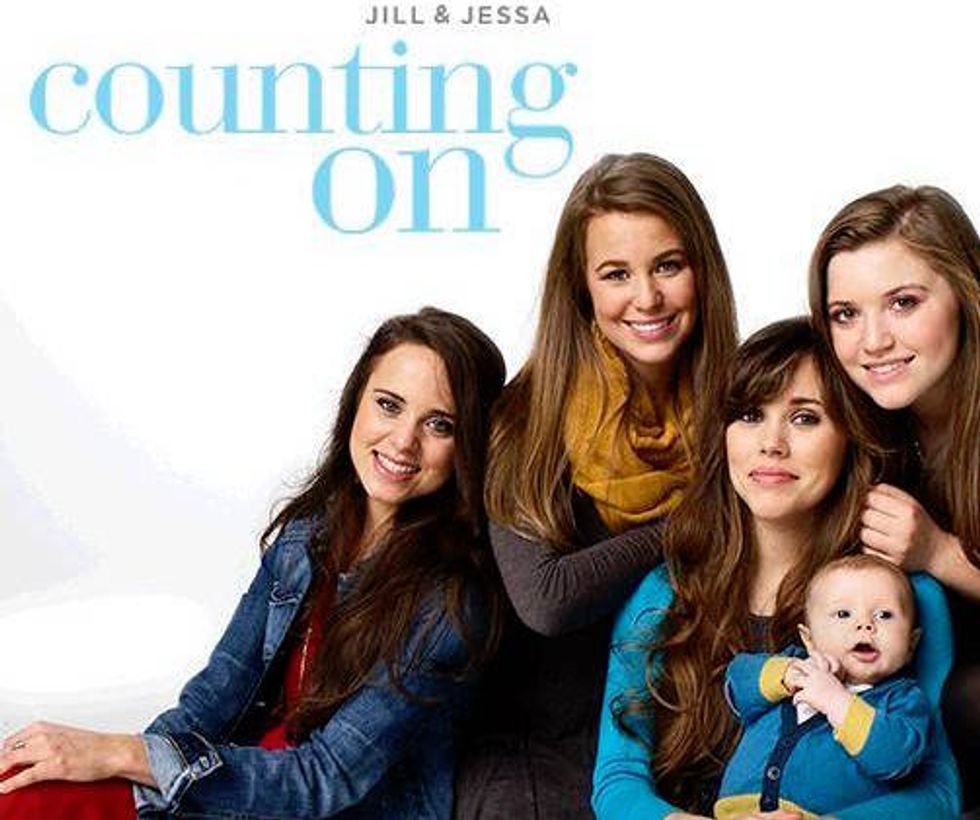 how can you call yourselves Quiverfulls when there's only one baby in that picture?

Hey everybody! TLC did not cancel this new-ish Duggar show yet! However, they also haven't yet trotted Josh Duggar out to show him no doubt crestfallen yet renewed in his vows to love Jesus and Anna and not be a gross child molester and affair-haver. Stupid show.

This week kicks off with reminding us that Jinger knows how to use a camera, because apparently one of the goals of this show is to remind us that the Duggar ladies do many much more things than just make babies and get married. They have hobbies! Look!

We are hurled through a dizzying selection of hot pix that Jinger has taken of the fam. You know, for most people, taking pictures of your family doesn't even rise to the level of hobby. It is just a thing people do. But when your family comprises the population of a small town, we guess you get to call it a hobby. Jessa is happy that Jinger has moved on to doing this "professionally." Here, "professionally" means "for another weirdo Quiverfull family" of course.

They're "scouting a location" for ... ok we totally didn't pay attention to what they're scouting for. Anyway, the perfect location turns out to be where Jessa got engaged to Ben, who does not appear to have really thoroughly combed his hair for the blessed occasion.

Meanwhile, Sierra -- who may or may not have been on a previous episode we cannot keep track of the Duggars and Duggar-adjacent people -- is picking Joy up to go visit yet another friend of the Duggars who has some sort of small business where the Duggars can spend their money only on Duggar-type people. They also all seem to be weirdly nearby. Do all of them live on a creepy Christian compound or something?

Now we get the recap of Sierra's life and times with the Duggars. Apparently she invades the ginormous kitchen of Ma and Pa Duggar so she can bake things.

These are the most goddamn boring people on the planet. Except when they're being terrifyingly end times-ish or pedophile-y. But otherwise, it's like being stuck at a party with a third cousin that has decided what you'd really like to hear is a turn-by-turn recap of their drive up from Kansas City.

OK, so it looks like Joy and Sierra aren't visiting the actual small business of the friend. They're just visiting the friend who is, of course, toting a toddler around because she is required to in order to even appear on the show or something, probably.

The friend makes cookies for a living, presumably at an actual business with an actual commercial kitchen. Instead of going to the business kitchen, which is likely well-equipped to make the 13 dozen cookies required for whatever surprise baby shower all these people are throwing, they just go over to this lady's house and try to bake all the cookies in her perfectly regular-sized kitchen. We call bullshit.

Now, let's ask all the Duggar siblings how they feel about Joy. They all describe her as joyful. We are not making this shit up.

Only after making a couple dozen shite-looking cookies does it occur to Joy and Sierra that they could just hire cookie lady friend Holly to make the fucking cookies. YOU THINK?

Remember how last week Jana was going to build a playhouse for the kids? But then the blotchy boys of Duggar land got their mitts on the idea and now they're building something nonsensically big that actually involves earth-moving equipment and one brief shining moment of drama where you hope that one of the logs will take out a Duggar.

Anna has trotted her brood over to the Duggar house so everyone can speak in vague terms about how brave and strong Anna says. Anna mumbles something about how in "our situation, it is good not to be alone."

Jesus Christ the spectre of creepy pedophile Josh is the one-million pound elephant in this show.

While the boys build the giant treehouse that is not actually in a tree, the ladies get to go shopping in order to stock the treehouse with the materials for a play kitchen, so the younger Duggars can have a place to prepare for a life of endless drudgery in a full-sized house some day. But instead, the ladies decide to shop for clothes. Oh, ladies!

Eventually they make their way over to ooh and ahh over some cast-off pans for the kitchen and OH HEY LOOK GUYS THE SQUASHY BABIES CAME ALONG.

The one who can't hold his head up is Sturgeon or Spurgeon or whatever, and the one swaddled in pink and ribbons and drool is Anna's latest spawn, we think.

It's the 20-minute mark before we get to go visit Jill and Derick in their undisclosed location in Central America. Jim Bob and Michelle came down! Hooray! We get a brief view of them and then they're whisked offscreen so we can hear about the many good works of Jill and Derick, which seems to just involve going around and pestering the locals.

Whoops! That's all for Jill and Derick! Back to prepping for the surprise shower and yet another interlude of talking about how great Joy is. She used to be a tomboy, but now she is not! Come and get her, lads!!

A couple Duggar dudes explain how great Joy is while the offscreen producer asks them what kind of guy is right for their sister. Josiah says that "if guys come around, they're gonna have to go through a few guys -- I'm talking about me and Joseph." Thanks Josiah, for making it sound like the potential Joy suitor will have to bang you and your bro before they get to her.

Surprise baby shower! For Kristen and Justin! Except Justin is already there, so just a surprise for Kristen, maybe? Justin yammers on about how thrilled he is at the whole turn of events, but all the while he looks like he's being held hostage.

Kristen is off with Sierra and some female Duggars doing some lady things like a pedicure and talking about their babies, like you do. But the lady time is running late and cutting into surprise shower time! Except they don't surprise her with the shower, really. Instead, hostage husband Justin calls her and basically tells her she's en route to a shower-type surprise, but she has to put a blindfold on until they get there. Do Quiverfull people not know how surprises work?

They make this poor woman wander in blindfolded, and then her dad basically crawls on top of her.

Now it's time for baby shower games! But instead of anything remotely resembling any shower you have ever been to, this game is called "multi-tasking men" in which the menfolk have to grab a baby -- maybe their own, maybe not -- and hold it while they pretend to talk on the cell phone and hang laundry.

Who on earth thinks this is a game? It's like they decided the adults would enjoy pretending to vacuum or answer phones at an imaginary office. People do not generally find hanging laundry entertaining, even in the service of celebrating the upcoming birth of yet another one of these type of people. And then of course we close out with a prayer where Kristen's creepy dad creepy looms over them and prays.

Next time! That Christian rapper dude! This is going to be so awful that it will make this whole season worth it. See you next week.