Time To Get Romanced By Tim Kaine While Mike Pence Watches. Your Vice Presidential Debate Preview! 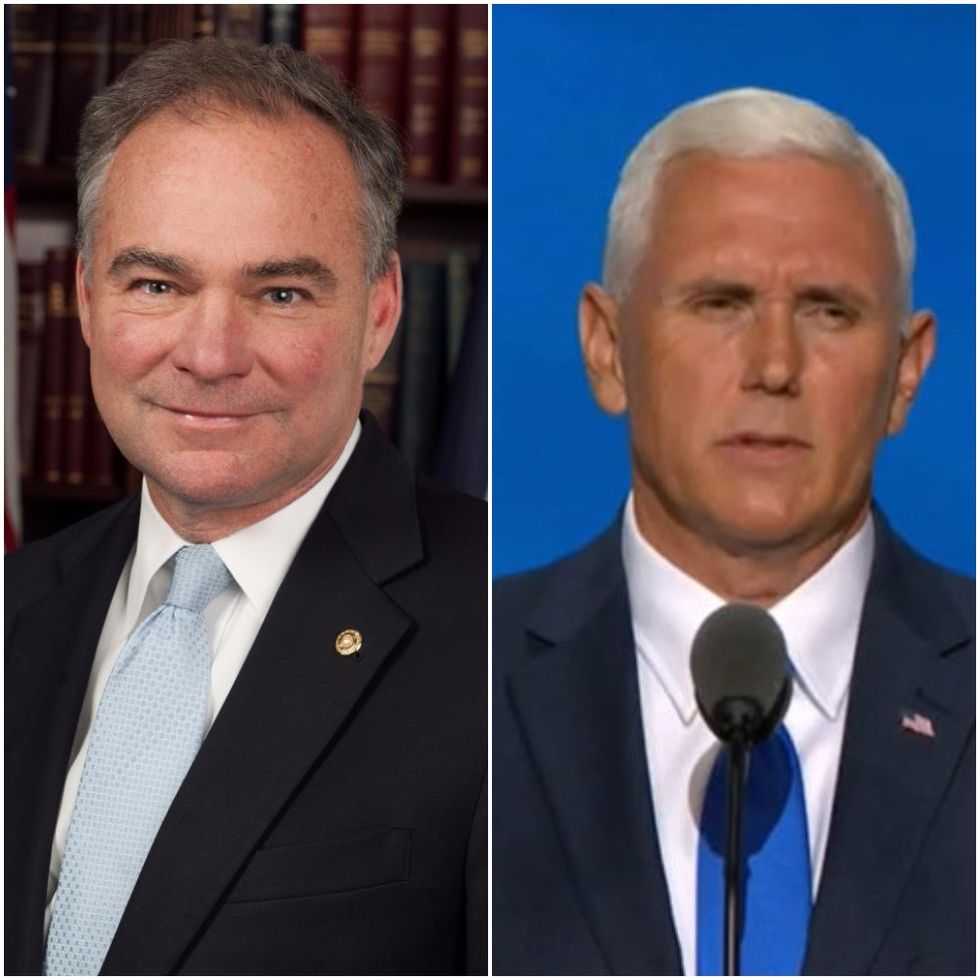 ACHTUNG UPDATE HELLO: Liveblog is RIGHT HERE, go to it.

Hip-hip-hooray, it is time for the one and only vice presidential debate! We've been hearing a whole lot about these whippersnappers at the "top of the ticket," but not so much about the nubile young things they've picked to serve as the "Joe Biden" of America, the one who steps in to serve if the president is incapacitated, like if, god forbid, something happened to Hillary Clinton, or if Donald Trump got a hangnail and was too much of a pussy to continue his term in office.

(LOL just kidding; Donald Trump already said his vice president would be in charge of foreign AND domestic policy!)

As is our tradition when there is a debate, we have wroted you a "debate preview," where we make up bullshit about what is going to happen, and then tell you what time to watch to see if our predictions come true.

So who will be making loud debate sounds on the stage tonight?

YOU JUST DID BIAS TO MIKE PENCE!

What are you gonna do about it, cry to your Nana?

Tell us a sexxxy thing or two about Tim Kaine.

He is a very nice and smart senator from Virginia, and he also used to be the governor there! He speaks fluent Spanish like a common bilingual person! Here is the speech Kaine gave on the campaign trail when Hillary chose him as vice president of being her new BFF. Watch it all over again for the first time!

Yay, you are in love with Tim Kaine now!

Tell us a GRRRRRR thing about Mike Pence.

It just so happens that the day before Trump officially announced Pence as the guy who will be president when Trump is too busy playing on Twitter to be president, we wrote a YOOOGE round-up on what a shitbag he is. He hates the gays so much he signed that horrible Indiana religious freedom law. He hates the poors. He used to write op-eds saying smoking doesn't kill. Oh, and he pretty much came up with the idea of defunding Planned Parenthood. Here is a video for you to watch:

Oh, and Pence is one of those nasty-ass Republican governors who's been trying to stop Syrian refugees from being resettled on his lawn, but UH OH, a federal appeals court just told him to fuck off, ONE DAY before his big night in the spotlight.

And what events will these gentlemen be competing in this evening?

I think you mean "birdshot," yeah?

HAW HAW, you made a Dick Cheney joke!

Will there be clowns?

Will there be a pony?

Will they raffle off sweet-ass prizes for everybody who shows up to watch?

OK fine, we are so excited about this debate, and we must know when it airs on the television!

See? We knew you'd get excited. It's at 9 PM Eastern, which is a different time in other time zones. You will have to use your abacus to figure out the rest.

I donated my abacus to the Trump Foundation!

Awwwwww, you are so nice. We're sure it went to a needy person, like maybe Donald Trump.

It will be aired on all the major networks, so you have no excuse not to watch it, ya know, unless you want to watch something else. You can also watch it online here and here.

OR if you a Chicago Wonker, you may go watch the VP debate with Wonkers Robyn and Dominic, at a bar! They will be miming the debate for everyone while they watch! (No they won't.) All the details are HERE.

We got your liveblog RIGHT HERE, buddy.

Will Wonkette alum and all-around swell gal Sara Benincasa be joining us for the liveblog, due to how she wrote a book about Tim Kaine?

YES, how did you know? You should also go buy her Tim Kaine fan fiction book RIGHT NOW and read it this afternoon so you are ready.