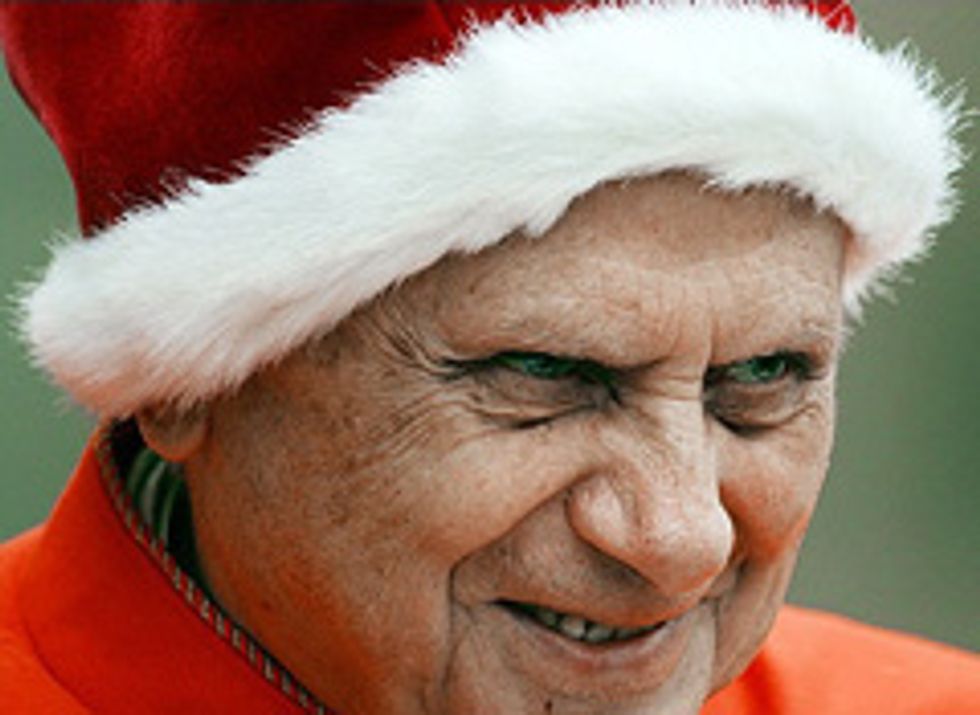 Today we revisit the Catholic Church, which is undergoing something of a scandal, whereby adult priests rail young children with their peens for centuries, and then no one goes to jail, and then the Church blames it on other people, and then people still choose to be involved with this institution. This is an Oligarchy, like the Southern planters, the industrialists, and currently the big Wall Street Banks. Fortunately no one really cares about the Catholic Church anymore, except in the various Mexicos. Is this starting to become one of those rants? Let's get on with the blockquotes.

Here is a horrible thing:

SANTIAGO, Chile — The Vatican's second-highest authority says the sex scandals haunting the Roman Catholic Church are linked to homosexuality and not celibacy among priests.

Cardinal Tarcisio Bertone, the Vatican's secretary of state, made the comments during a news conference Monday in Chile, where one of the church's highest-profile pedophile cases involves a priest having sex with young girls.

(Emphasis ours, to point out obvious problem with motherfucker's argument. There are many other problems, namely the fact that people are fucking children, and this has nothing to do with whether two dudes want to bone, or whether two ladies want to scissor. Although we must remember that ladies do not exist, in Catholicism, unless God fucked them with his magic tough to produce Jesus. Again, this is become one of those rants.)

Last week, retired Bishop Giacomo Babini of the Italian town of Grosseto told the Catholic Pontifex website that the Catholic pedophile scandal is being orchestrated by the “eternal enemies of Catholicism, namely the freemasons and the Jews, whose mutual entanglements are not always easy to see through. … I think that it is primarily a Zionist attack, in view of its power and refinement. They do not want the church, they are its natural enemies. Deep down, historically speaking, the Jews are God-killers.”

You might think that the 81 year-old Babini had already said more than enough for one day, but once some people “pop,” they just can’t stop. “The Holocaust was a disgrace for all of humanity,” the good bishop told the world, “but now we have to look at it without rhetoric and with open eyes. Don’t believe that Hitler was merely crazy. The truth is that the Nazis’ criminal fury was provoked by the Jews’ economic embezzlement, by which they choked the German economy.” He concluded that the Jews’ “guilt is graver than what Christ predicted would happen to them, saying ‘do not cry for me, but for your own children.’”

These are your leaders, Catholics. You were born into this faith. But now you are adults. You need to start fucking children, or you need to ignore the Vatican, an impediment to your very humanity.