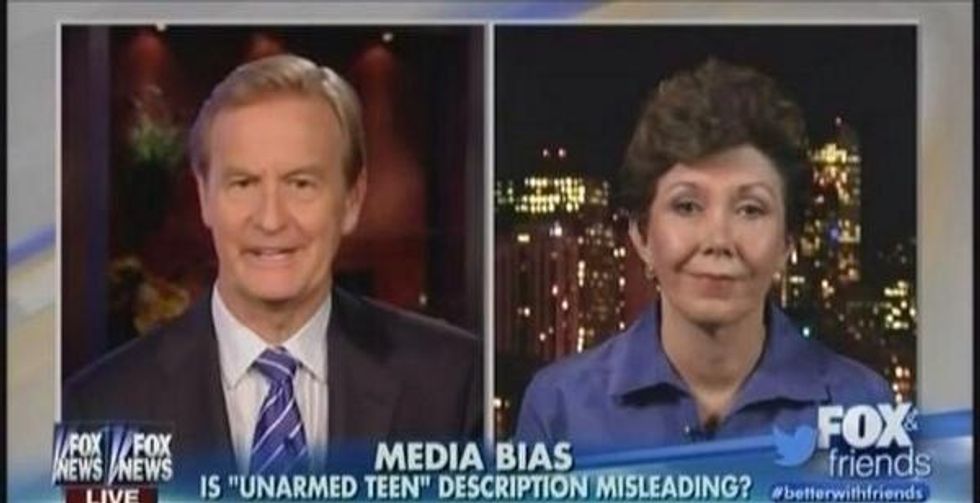 Today is the funeral of Michael Brown, the unarmed teenager shot to death by Officer Darren Wilson. For people made of actual human being parts, this is a sad and solemn affair. However, in wingnut world, where Officer Wilson is some kind of hero and Brown (a black man) had it comin' (because black man) what with being a thug (aka black man) hopped up on reefer (like a black man) and also too black (BLACK MAN!!!), it is A OUTRAGE!

Here's Fox News to do that thing Fox does so well:

The administration's handling of the Brown funeral already has started to raise comparisons between the two.

Yes, Obama's handling of the whole situation is definitely raising questions among people who hate the crap out of Obama already and will look for any reason, any reason at all, to hate him even some more! It is indeed disgraceful that the delegation to Thatcher's funeral was only led by two former secretaries of state -- George Schultz and James Baker -- who served when Thatcher was in office. Then again, neither of THEM could be troubled to come to Michael Brown's funeral, and we should note that Mrs. Thatcher was not gunned down in the street by an American cop. As far as we know.

So that is why "some" feel the need to remind us of how those same "some" have criticized Obama for being Obama in the past. It is like a trend!

The White House also came under criticism recently when Obama did not attend the funeral for Maj. Gen. Harold Greene, the highest-ranking U.S. military officer killed in combat since the Vietnam War. [...]

And just in case that is not enough to make you throw up forever -- even though it should be, what the hell is wrong with you? -- we thankfully have Twitchy to inform us that Americans are all, like, gag me with a spoon because Brown's funeral has been livestreamed, with this Twitchtastic headline and a bunch of tweets from total randos because that is what Twitchy does. (Seriously? Nine paid staffers? SERIOUSLY?)

You really have to appreciate the oh-so-subtle "of all backgrounds" point, so you know that it is not just white people who are creeped out; non-white people are too, which means there is nothing racist about it.

Now, because we are not Twitchy (most of the time), we will not bother to copy and paste every single idiotic tweet from every single #tcot idiot on the interwebs. But trust us, they are out there in full shrieking force.

But we feel a journalistic obligation to let you know how John Nolte, a Breitbart columnist, feels about this entire "disgraceful" spectacle of mourning for yet another young black man killed by a cop, like that is something we are even supposed to care about, puh-lease.

And in case you were wondering if Nolte has some words of white wisdom for you, black America (we assume that's who he's talking to, unless he's addressing Rep. Ted Yoho, who is sort of the Rosa Parks of his time), of course he does!

And now we are pretty sure every single last one of you is choking on your vomit, so our work here is done.