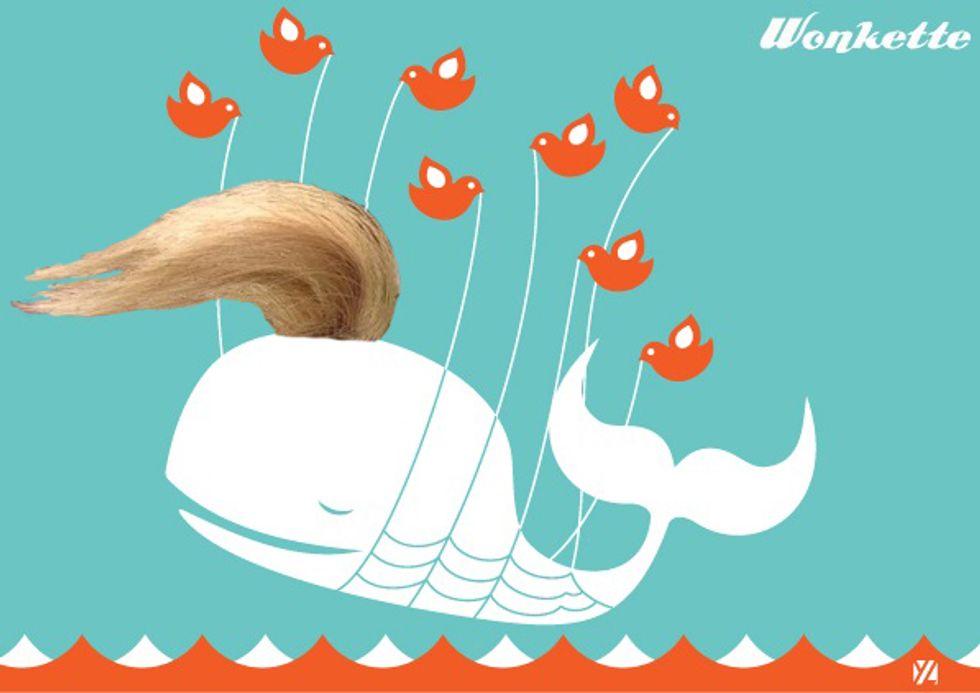 Oh no. Not again.

For eleven minutes Thursday evening, it was if millions of souls were untroubled by the ravings of a lunatic with far too much power, and then said "WTF?" Donald Trump's Twitter account briefly vanished from the interwebs, and anyone looking for the "thoughts" of the Great Man saw only this perplexing message:

Had the "president" lost his temper and deleted his account? Impossible. Had John Kelly rediscovered his sense of duty and decided to pull the plug on his boss's rage funnel? Unlikely. Had Trump's lawyers tried to keep him from incriminating himself any further? Haha, "Trump's lawyers!"

A couple hours later, though, the company was back with the preliminary results of that investigation: This was no boating accident. Turns out an employee had deliberately deactivated Trump's account, then grabbed a couple of beers from the beverage cart, blown the emergency slide and departed the goddamn airplane before it reached the gate:

Needless to say, this morning, Donald Trump was up early and explaining this just proves what an important guy he is, because perhaps no one had noticed he's the president of the United States and he needed to remind us.

Yes, Donald, if someone tries to strike down your stupid Twitter account it only makes you more powerful than we can imagine. We heard that line before.

There was much online amusement, though nothing compared to the "covfefe" incident:

During the eleven minute outage, the Stupidest Blog On the Internet, Gateway Pundit, managed to jump to the conclusion that those liberal jerks at Twitter had probably banned Trump, because that's what liberals do. At least the hed included a question mark:

They eventually corrected that story, and then, seeing the general amusement and rejoicing, took the opportunity to prove once again they don't have the slightest clue what the First Amendment means:

Just look at the examples they found of terrible liberals demanding the president -- and all conservatives -- be deprived of his First Amendment rights!

Yes, these are the same rightwing folks who insist liberals just needed to get a sense of humor when Republicans made hilarious jokes about lynching Barack Obama.

Buzzfeed learned from a "former senior employee" that

"a lot" of employees have the ability to suspend a user's account and that fewer, in the hundreds, can deactivate one. The former employee described the system like a dashboard, meaning employees might not need engineering skills to suspend or deactivate an account.

Buzzfeed's informant said the company had discussed the possibility of adding additional layers of protection for high-profile accounts, but had never actually implemented such a system.

We suppose we could do some Serious Muttering about the security implications of the fact that some dork could deactivate the president's Twitter account on their way out the door, then counter that with more Serious Mutterings about the security implications of the fact that this president has chosen to use such a nonserious platform as if it were really a part of government communication, but that seems like an academic analysis of fart jokes. But less worth doing. Besides, it's clear to us now that we're just living inside an insane simulation of a universe dreamed up by some demented Philip K. Dick fan, so fuck it all, we may as well hit "eject" on this version of reality.

In any case, Twitter is no doubt going to change who can take accounts of government officials offline, Donald Trump will continue to be an idiot in 140 characters, and the Gateway Pundit will go back to having hissy fits about mean First Amendment hating liberals and how George Soros secretly runs Black Lives Matter. Which is to say, balance has been restored to the Farce.

Yr Wonkette is supported by reader donations. Please click here to send us a bunch of filthy Ameros, you electric sheeple!