Today's Hearings: Senators Go HULK SMASH At Zip-Lipped Intel Chiefs Refusing To Give Up The Precious 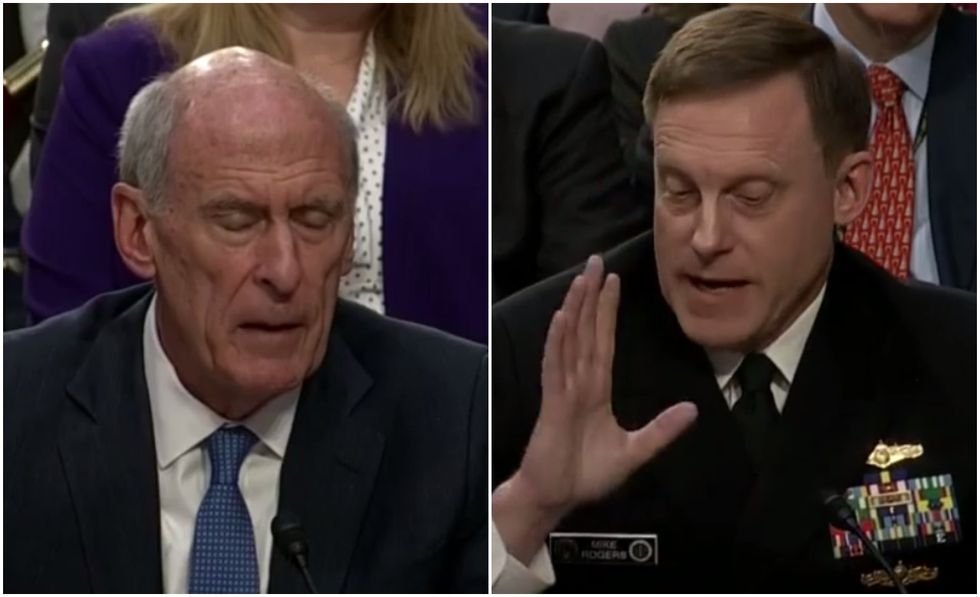 WOW! That hearing at the Senate Intelligence Committee was somethin' else! It was, in theory, a hearing about FISA surveillance, but what most of the senators wanted to talk about was all the reporting that says Donald Trump made inappropriate advances toward his intel chiefs, specifically NSA Director Admiral Mike Rogers and Director of National Intelligence Dan Coats, to try to get them to shut off the FBI investigation into Trump's ties with Russia. The men testifying -- Rogers and Coats, as well as acting FBI director Andrew McCabe and Deputy Attorney General Rod Rosenstein -- did NOT want to talk about that.

In particular, Rogers and Coats stuck to lame, pre-scripted answers, and refused to confirm or deny whether Trump tried to use them to obstruct justice. This caused FIGHTS with the senators, who were done with that shit before the hearing even started.

Here is Rogers's pre-scripted non-answer to a question from Senator Mark Warner, vice chair of the committee:

I am not going to discuss the specifics of any interactions that I may or may not have had with the president of the United States, but I will make the following comment: In the three-plus years that I have been the director of the National Security Agency, to the best of my recollection, I have never been directed to do anything I believe to be illegal, immoral, unethical, or inappropriate. And to the best of my recollection, during that same period of service, I do not recall ever feeling pressured to do so.

This is a refrain we would hear OVER AND OVER again throughout the hearing, and can you see how it is some highly lawyered horseshit? He has never been "directed" or "ordered" to do anything bad, and he has not personally felt pressured. But did Trump ask him to do anything to lean on James Comey to kill the FBI investigation? Haha, this statement does not address that question.

Warner reminded Rogers that the committee has "facts, that there were other individuals that were aware of the call that was made to you [from Trump], aware of the substance of that call, and that there was a memo prepared, because of concerns about that call." Rogers refused to respond.

Warner turned to Dan Coats, to see if he could confirm or deny the press reports that Trump tried to tamper with him, since he had promised before the Armed Services Committee that he would be willing to address all that before the Intel Committee. This was the reply from Coats:

OK, Coats said more words than that, but his basic answer was that, even though he said before he would yip-yap some information at them, he did not think it would be appropriate to yip-yap that information now, because it's a SECRET.

So, you think this pissed off some senators? You betcha! Instead of going through each and every one, let's focus on Senators Angus King and Martin Heinrich, of Maine and New Mexico respectively, because both of them went kinda apeshit and it was super fun.

King wanted to know all WHY all these ding dongs couldn't share their conversations with Trump or James Comey. First, to Andrew McCabe, he asked "Why not, do you not remember them?" and got all pissy, asking if there's a "legal basis" for why McCabe can talk to the special counsel, but can't give straight answers to the Senate Intelligence Committee. ZING!

But then it was time for him to go after Rogers:

Why not answering Qs?

Rogers: “I feel it is inappropriate, senator”