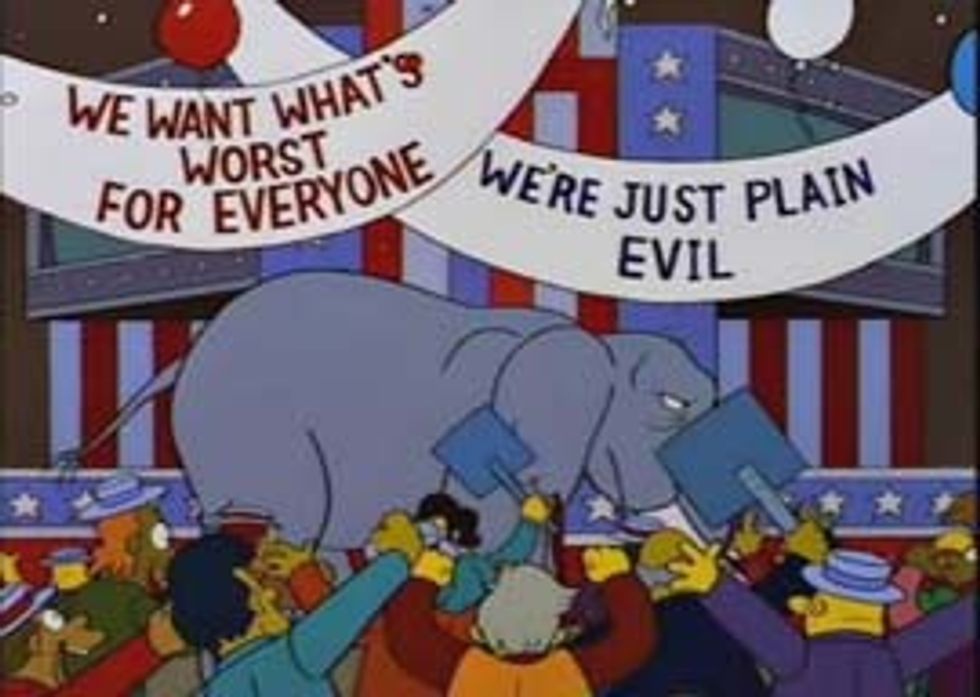 There are two surefire ways to tell if you have a really stupid idea. The first is to ask whether or not you are a Republican. If yes, the idea is likely stupid. If that doesn’t convince you, then look around and see if other conservative asshats are calling you a moron. If both things happen, you can be pretty sure you are a dumbfuck of the highest order. So whose dumbfuckery are we taking note of today?  Take it away, TPM:

Sen. Tom Coburn (R-OK) told conservative writer Byron York that, while he'd "love" to cut funding for the new health care law, it's an unrealistic push by the handful of GOP senators who have pledged to oppose any continuing resolution or appropriations bill that funds Obamacare.

Hahahaha. This guy is from OKLAHOMA, which is redder than Rick Santorum’s ass on nickel butt-fuck night, and he is calling the idea unrealistic. What kind of mindless, far-right ideologues are trying to shut down the government and crash the global economy to make a point? Let’s find out.

The Oklahoma Republican said the lawmakers who are leading the defunding charge -- a group that includes Sens. Mike Lee (R-UT, Marco Rubio (R-FL), Rand Paul (R-KY) and Ted Cruz (R-TX) -- are being "dishonest" with their base about what they can actually get done.

OK, well three out of four are pretty far along on the crazy spectrum. But Marco Rubio wants to become President by providing amnesty for all the Messicans through immigration reform -- what is he thinking? Hold on… we are getting a news brief. Ahh, it looks like Marco Rubio is afraid of looking like a moderate because there are a lot of BATSHIT CRAZY MOTHERFUCKERS who vote in Republican primaries, so he is tilting hard right in order to capture the loony wing of the Republican party, which currently comprises of 132% of all registered Republicans.

Also, how bad is your idea when Tom Coburn, the Senator who is proud of his nickname of “Dr. No” (because he is a medical doctor AND because he votes no on so many things), thinks your right-wing plan hatched at the Rascal-riding section of the last Tea Party Rally in Bumfucksville is “dishonest?” That means it is a terrible terrible plan.

We have to give credit to Sen. Coburn here (THIS CAUSES US PAIN -- LOTS AND LOTS OF PAIN), because the plan to shut down the government over Obamacare is really really dumb. The law passed, and you guys are just being whiny new members of Congress who overpromised and underperformed worse than those ten glorious seconds with [name redacted] in high school. Threatening to crash the global economy by defaulting on America’s debt in order to PREVENT people from getting health insurance is such a gawd-awful idea that we really have no words for it.

And if just Sen. Coburn calling you a dishonest piece of horseshit wasn’t enough, there are actually other far far far far right politicians who also think you suck at your job and life:

In sum, we fucking hate Sens. Lee, Rubio, Paul and Cruz even more now, because they made us agree with Sens. Coburn, Cole and Burr. What is this world coming to? In honor of this fiasco and mind-bendingly dumb series of events, Yr Wonkette officially declares that happy hour starts when you finish reading this sentence. Because god knows we need a drink.