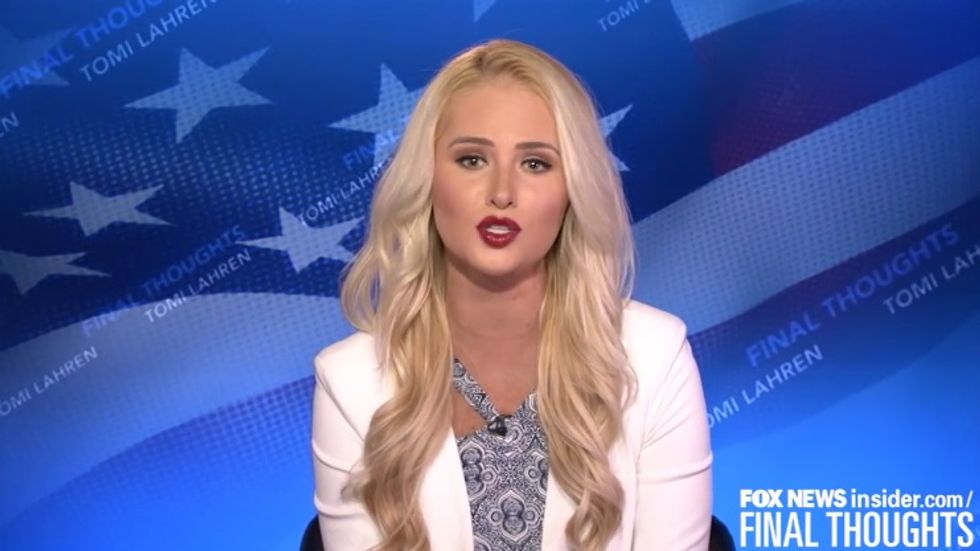 Tomi Lahren, the Fox News dipshit who doesn't know a strawman when she's literally crucifying herself on one (and we literally mean that in the Joe Biden sense), has some thoughts about all you liberals who are offended by "thoughts and prayers" after mass shootings. In a dumb rant on Fox News yesterday, Teary Llama takes on an entire army of strawmen and slashes them to pieces, and gosh, it's impressive, right from the get-go:

If you think Christianity is a mental illness, if you are offended by thoughts and prayers, if you think the solution to our familial, social, cultural and political issues is to remove God and religion from our country, these final thoughts are for you.

Huh! What if you simply think "thoughts and prayers" don't actually accomplish anything? That seems to be the prevailing opinion we've seen among people mocking that particular trope. We're sure there must be some people who think religion is a mental illness, although most atheists we know think it's just not something they believe in, and that it all too often gives people an excuse to do terrible things. And again, we don't know many people who want to extirpate religion, although they would very much prefer it not be allowed to set public policy.

Oh, sorry, Tawny Lemur, we went and called you a liar again. Do go on about how oppressed you are.

I’m so tired of listening to some of these leftists dismiss and attack Christians, Christianity and traditional religious beliefs. It’s one thing to be a non-believer. But it’s another to routinely demean and dismiss those of us who believe in our Lord, Jesus Christ.

Oh, gosh, you really have it bad! People have said unkind things about people you agree with? That really is rough. Say, what network do you work for, again?

Not surprisingly, these are the same people who fiercely defend Islam after every terror attack. Explain the double-standard, please. You’re all about love and tolerance -- of everything and everyone -- except the Christian community.

Ah, yes, that network. Here's a little secret, YTuMama Tambien: Liberals don't have any great love for Islam. Atheists think it's a load of malarkey, just like Christianity. But we do tend to have a problem with people who use the worst crimes of Islamic radicals to tar all Muslims as murderers and terrorists. We don't like bigotry against anyone, really, especially when a majority tries to insist their invisible friend in the sky wants believers in a different invisible friend to be driven from The Homeland. And no, insisting that science is real and that teachers should not lead daily prayers really is not the same as oppressing Christians.

Lahren offers a brief word of support for the notion of separation of church and state, then gets right back to beating on that straw-atheist that wants to utterly strip America of every last vestige of God and religion:

When you remove God, values, and virtue from schools, sports teams, media and popular culture -- you’re not helping anyone. When you insist on creating a spiritual crater in society, what do you think fills that void? If we aren’t rooted in anything, if we don’t stand for anything, we will fall for anything.

Gosh, if anyone really were arguing for a complete moral vacuum, an absolute rejection of all values, we suppose we'd have to condemn that sort of nihilism, and perhaps quote The Big Lebowski to that effect. But nah, this twaddle isn't even worth wasting a "say what you will about National Socialism, at least it's an ethos" on. OK, so now that we've done away with God, what's left, Tiny Liar?

Take away the moral compass, and what do we have left? Greed, self-interest, materialism, hate, hopelessness, and the tattering of the very fabric on which our nation is built.

Ah, the Trump administration agenda. We thought you were FOR that.

Ready for the big finish?

The Leftists often claim they are all about forgiveness, love, philanthropy and kindness. Well newsflash … those are the basic tenets of the Bible and Christianity.

Good call! Those values are also at the heart of most world religions and most secular values systems, too. Funny, it's almost as if they're good things regardless of whether one thinks God will send you to hell if you fail at them. Honestly, it's why atheists keep quoting Matthew 25:34-46 at you people all the time. We may not agree it's the inspired word O'God, but we think it's a pretty good template for how people ought to treat each other. We also like the version Kurt Vonnegut distilled down even further, to "God damn it, you've got to be kind."

Oh, look at us being hypocrites again. We quote a secular author, but we think God is important to use in a swear.

Tofu Slothrop closes with a straw song, some straw Confederate generals (who loved their slaves very much as Jesus commanded), and a straw flag:

It’s not a partisan thing, so don’t make it one. You’re offended by our national anthem, our flag, our statues and our prayer. But unfortunately for you, some of us will stand and fight for all of it.

Gosh, sure is good to know she's above partisanship like that. And also uncontaminated by logic. This isn't a partisan issue, libs suck, love it or leave it, MAGA, Amen.

Yr Wonkette is supported by reader donations. Please click here to help keep our servers running and our writers paid.