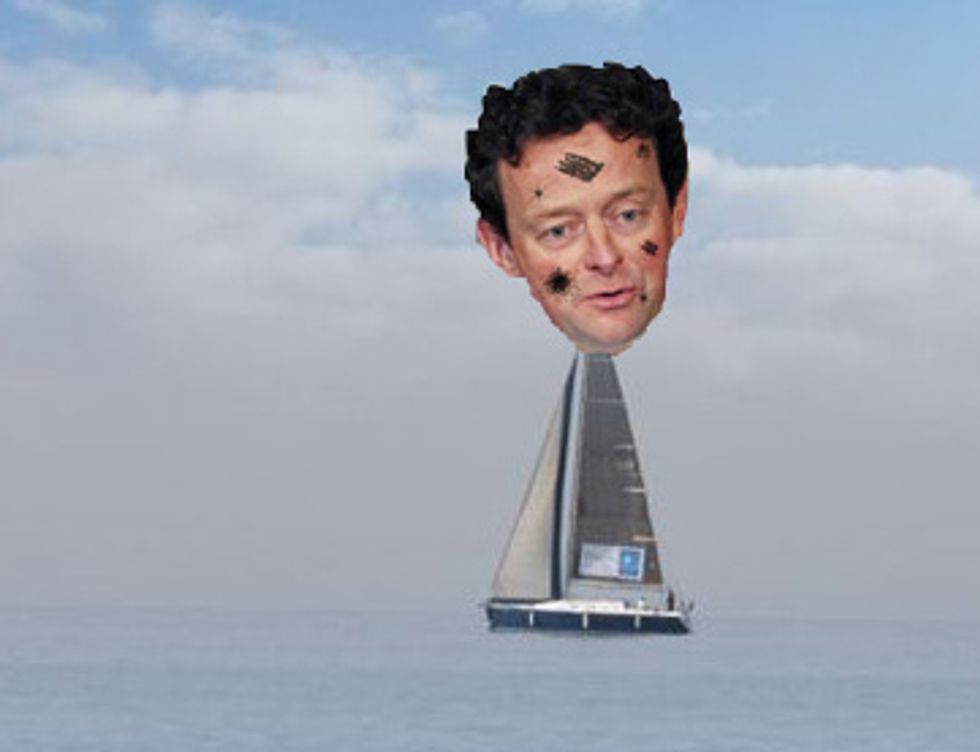 Oh yeah, good idea, people totally won't get all pissed off and populisty about you going towatch your yacht compete in a yacht race, Tony Hayward. That will definitely ingratiate you with the small people of the Gulf Coast. It's just like their favorite sport, NASCAR. NASCAR has its roots in bootleggers modifying their cars because they needed to outrun the cops. Yacht racing has its roots in rich people modifying their ridiculous boats because they have too much free time and needed a new thing to show they're better than other rich people.

The Coca-Cola 600—oops, no, it's called the "JP Morgan Asset Management Round the Island Race"—is one of the world's largest yacht races, according to the New York Times, WHICH IS ELITIST AND WOULD KNOW SUCH THINGS. So of course Tony Hayward owns a yacht and would enter it into this race, and of course he would attend this race, because at this point he cannot possibly care what people think. The only way he could improve his image is if he choked on a handful of tar balls.

BP, though, has come up with a half-assed idea for explaining this:

“He is having some rare private time with his son,” a BP spokeswoman, Sheila Williams, said in a telephone interview on Saturday.

Yes, that yacht is LIKE A SON to Tony Hayward. HOW DARE YOU, LET HIM SPEND SOME TIME WATCHING HIS KID PLAY SPORTS. Seriously you guys, lay off Tony Hayward. This yacht is the only family he has left since his wife died in a car accident in 2003. (His wife was a Ferrari Enzo.)

Republican Senator Richard Shelby of Alabama got on the teevee to give us the requisite OUTRAGE AT THIS MAN HAVING A HOBBY:

“I can tell you that yacht ought to be here skimming and cleaning up a lot of the oil,” Mr. Shelby said.

Shelby can tell us this! He can tell us that a little racing yacht can somehow skim and clean up a significant percentage of the millions of barrels of oil that have been spilled! Thankfully he is here to tell us this. Surely Shelby is drafting legislation right now for the U.S. to buy a couple of yachts, because that's all we need to clean up the oil spill.

Shelby failed to mention that he helped put together legislation that opened up areas of the Gulf for offshore drilling and that he still supports off-shore drilling. But that's obvious. CEOs of capitalist oil companies like BP should never actually drill for off-shore oil. Those government incentives to gather this wildly profitable resource without true oversight should only be taken advantage of in theory. In practice, it leads to stuff like this. Shelby didn't want off-shore oil drilling to happen in real life, you dummies.