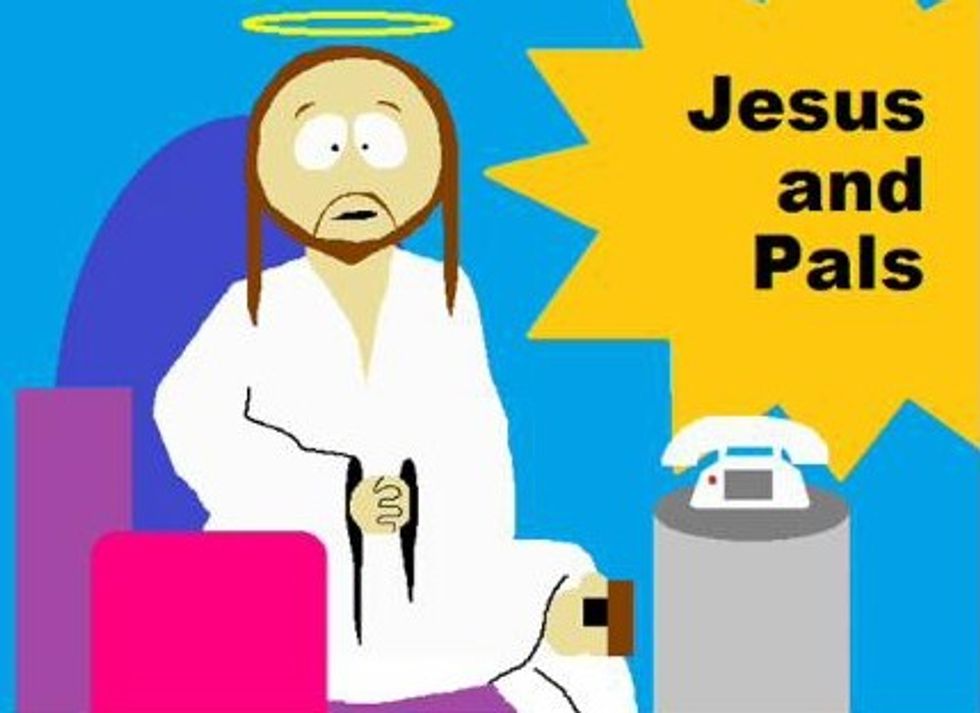 Tony Perkins, head honcho at the Family Research Council, is a terrible human being. In fact, he may not be human. We are guessing he was projectile vomited from the rubbish-filled gut of a hate-filled demon and sent to earth to punish us for the amusement of the Greek gods, or something. What asinine hate-filled lies is he spewing now? After DOMA was repealed by SCOTUS, Perkins went on teevee to torture the eardrums of innocent Americans everywhere, saying:

"We're already seeing bakers and florists and photographers forced to participate in same-sex marriages under the threat of law and in some cases even jail."

Is that so, Mr. Perkins? Politifact decided to fact check you, because you are a known liar and bigot and awful demon-vomit life form. What did they find?

We didn't find cases where people were forced to participate against their will. However, if vendors refuse service, there are consequences. There are 21 states that forbid discrimination based on sexual orientation. Vendors who refuse service there could face legal actions and fines.

The "jail" part of Perkins’ claim is an exaggeration. We couldn’t find any evidence that a vendor had been sent to jail or that any legal authority had threatened jail time.

What is this country coming to when we think that discrimination is against the law? Can’t we go back to the good old days when businesses can refuse service to IrishItaliansCatholicsJewsBlacks Gays without Big Government trampling all over their freedom? This deserves a wonksplanation.

Why is Tony Perkins whining, other than the fact that he is a giant crybaby who believes that if he doesn’t get his way he is being persecuted, just like Jesus on the cross except without the nails or the pain or the death but instead with the not getting everything he wants? In some places, gay people are getting married and want things like flowers and a cake. And in some places, like Sweet Cakes by Melissa in Gresham, Oregon, they get told things like, “they were abominations to the Lord.” The couple, being actual human beings with rights and stuff, decided that discrimination is a bad thing, and against the law, so they filed a lawsuit. BECAUSE THIS IS AMERICA AND THIS IS HOW WE SOLVE DISPUTES. And Oregon is one of those states where you can't discriminate against gay people, because they are people, too.

Now the Christianist business owners all across the land are gnashing their teeth and crying jebus-tears over the fact that they have to make wedding cakes for lesbos and fags and “genderfluid” folks. It is religious persecution to make them follow the same laws as everyone else, because once you are washed in the blood of lambs you are magically exempt from laws that make you feel icky.

Also, we are just wondering if the owner of Sweet Cakes by Melissa did checks on all the hetero marriages they made cakes for. Were any of the participants murderers, child rapists, or Baptists? Did any wear garments of diverse sorts, such as wool and linen together? Did any eat bacon or ham? How about interracial couples? How closely do you really check to make sure no other abomination-type people eat of your purity-cakes? Or are you just using religion to provide cover for being a bigot?

Tony Perkins read that Politifact called him out for being a liar (which we are pretty sure is a sin, but who are we to judge) and immediately begged for forgiveness from the LGBT community. Haha, not really. Instead, he decided to whine some more, because, as we discussed above, when someone disagrees with you after you have been on your knees for jeezus (and had salvation explode all over your face), you are being persecuted for your faith (not for being a bigoted asshole). According to TruthWinsOut, he said (our bolding):

The media, in a desperate attempt to downplay the persecution Americans will face for opposing same-sex “marriage,” is resorting to lies from its own “fact-checkers.” They understand, as we do, that it’s harder to vilify someone when you see them suffering for living out their faith.  And for dozens of men and women, that suffering is taking place in the form of more than jail time. For them, the nightmare is already here in the form of thousands of dollars in fines, lawsuits, public humiliation, boycotts of their businesses, death threats, and vandalism of their property. This is the real intolerance. And one day, no amount of shoddy journalism will be able to hide it.

We want to focus on the bolded section. We have no problem with the fines, lawsuits, public humiliation, or boycotts. These all seem like perfectly reasonable reactions to businesses discriminating based on selective reading and selective interpretations of really old books, and breaking the law. In fact, we totally encourage all these things for businesses that don’t support our LGBTQMORELETTERS friends. We hope that Melissa never makes another sweet cake in her life. However, we are against things like threats and vandalism, because we are better than that, people.

Also, too, we love how “fact-checkers” get the same scare quotes as “marriage.” It’s kinda what we need to do when we describe Tony Perkins as a “person.”