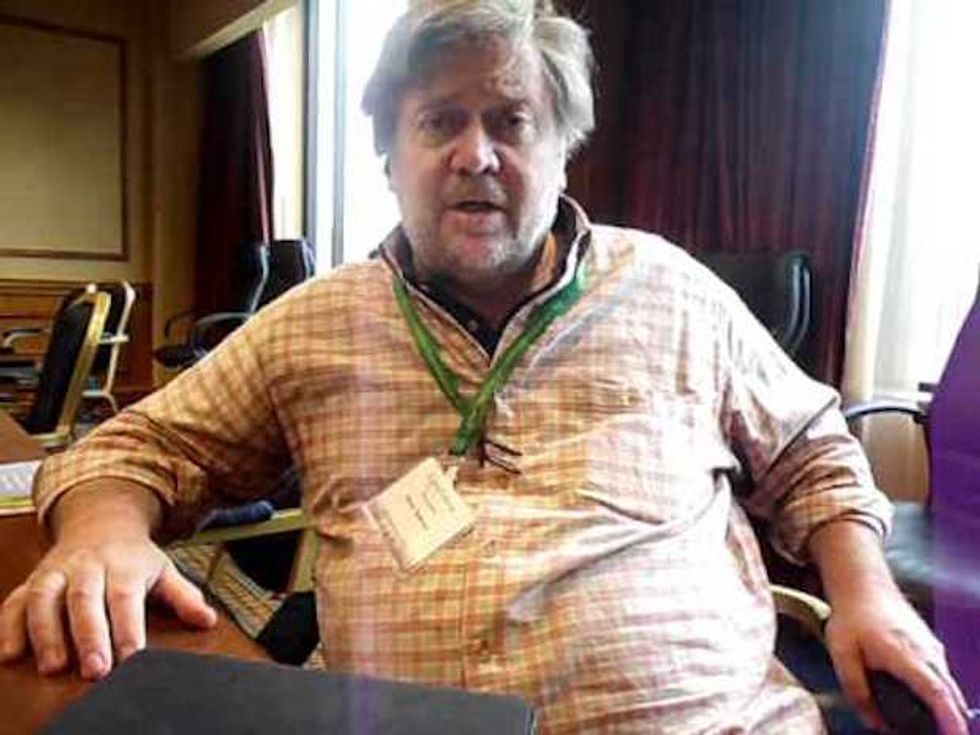 DEEP RIFTS in the Rightwing Crazysphere, as Buzzfeed reveals Steve Bannon has allegedly cut all ties with former Breitbart tech editor and Reich whisperer Milo Yiannopoulos following that big Buzzfeed story earlier this month that revealed, to the astonishment of perhaps seven people, that Yiannopoulos had worked closely with a bunch of white supremacists and sought their help in preparing articles for Breitbart.

Bannon, who realizes that Breitbart's business model depends on whipping up white anxiety and rage while still maintaining -- for the sake of keeping at least some advertisers on board -- at least a nominal separation from the most overt displays of racism, has apparently declared Milo persona non grata, not to mention tagliatelle ai carciofi:

Yiannopoulos, Bannon told at least one acquaintance, is "dead to me."

[wonkbar]<a href="http://www.wonkette.com/623947/but-breitbarts-milos-and-steve-bannons-emails"></a>[/wonkbar]Sadly, the report by Joseph Bernstein, who did the larger exposé showing exactly how Yiannopoulos had collaborated with white nationalists while writing his trollish articles for Breitbart, doesn't go into much more detail on the Bannon part of the story, apart from saying Bannon had vowed Milo would never write for Breitbart again (or turn in ghostwritten stuff with his name on it, which Bernstein also revealed was a common practice for Milo). We were hoping to learn more of Bannon's struggle to keep a straight -- albeit moonscaped -- face while proclaiming that white supremacist ideas would find no safe space for expression at Dead Breitbart's Home For Industrial Strength Dogwhistles.

[wonkbar]<a href="http://www.wonkette.com/620229/trumps-favorite-real-billionaires-now-funding-creepy-provocateur-milo-yiannpopoulos"></a>[/wonkbar]Instead, Bernstein wants to know what repercussions, if any, Bannon's unfriending of Milo might have for the relationship between Milo and the Mercer family, the wackaloon billionaires who own a large chunk of Breitbart and have long been Bannon's main patrons. After being forced out of Breitbart because he made some hilarious jokes about the perfectly innocent side of pedophile priests, Milo found new financial backers in tech billionaire Robert Mercer and his strange far-right daughter Rebekah, who funded Milo's new media venture and helped him keep his U.S. work visa, too.

But now that their Number One media darling has spurned Milo, who is Number Two in so many ways, will the Mercers keep the young jerk on the payroll so he can continue gathering young folks to the far right? They ain't saying:

The Mercers did not respond to multiple emails asking them if they intended to continue funding Yiannopoulos, nor did they respond to emails informing them that Bannon had excommunicated him.

Bernstein also notes it's not clear whether the Mercers knew Yiannopoulos palled around with Nazis prior to the exposé, although you might think his Breitbart apologia for the cheeky lads who post amusing gas-chamber memes might have been a hint.

So is Milo going to get the boot from Mercerland? Bernstein seems almost touchingly convinced that some in the Rightosphere might care if the Mercers continue to patronize Yianopoulos now that he's been overtly linked to Nazis instead of just winking at them:

For the press-shy billionaires [...] the lack of a public break with Yiannopoulos raises questions about what exactly they want the future of conservative politics to look like. The anti-globalization, anti-immigration Breitbart, which once featured a "black crime" vertical, has long been accused by critics of stoking white racial resentment.

To which we can only assume Breitbart readers -- who've taken to insisting Myeshia Johnson, the widow of slain Army Sgt. La David Johnson, is a money-grubbing, America-hating hood rat who never deserved her hero husband anyway -- would unanimously react by condemning Bernstein for his racism against white people.