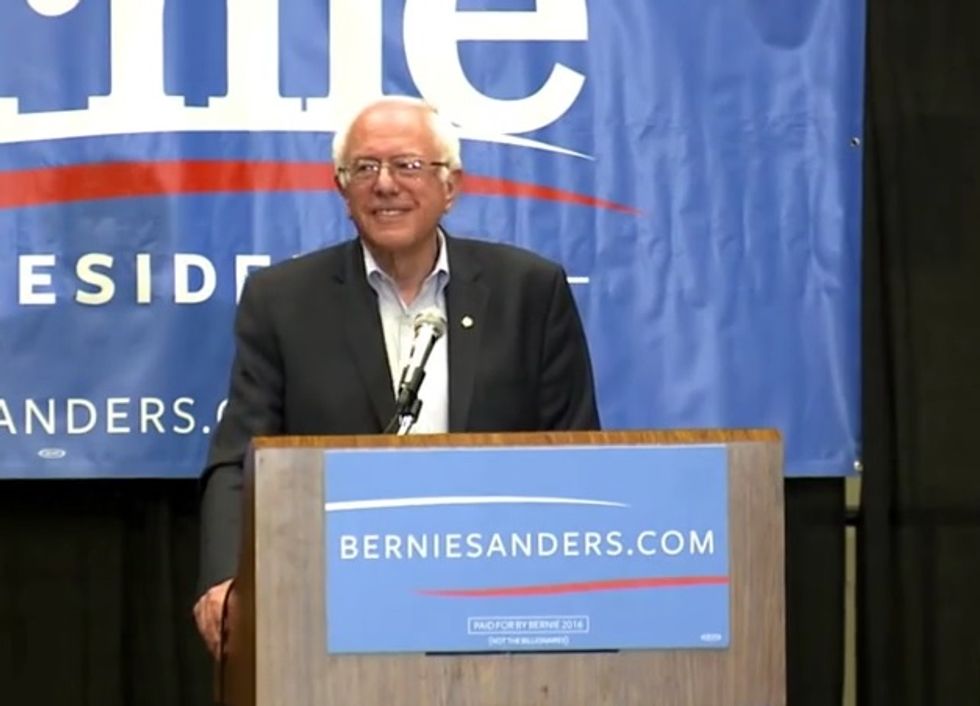 Senator Bernie Sanders had a record crowd at a rally Wednesday in Madison, Wisconsin, drawing nearly 10,000 people to yet another packed event. It's just the latest huge crowd for Sanders, who has been polling surprisingly well against Hillary Clinton in Iowa and in New Hampshire. We like Bernie so much that we're even willing to put up with people yelling "Feel the Bern!" Maybe. We're almost starting to think that all this Bernie enthusiasm is catching on -- and for once, we're looking forward to the Democratic primary debates.

Sanders was pretty impressed with his own crowd, looking around and saying, "In case you haven't noticed, there are a lot of people here!" In the People's Republic of Madison, he got the biggest crowd of his -- or any -- campaign so far, because there's no way we're counting the 11,000-plus Liberty University students who were dragooned into attending Ted Cruz's campaign announcement in March.

He also got the crowd pumped up with a reply to a HI-larious billboard that the Wisconsin Republican party put up to welcome him to the state:

Struggling to get a word in edgewise among the chants of "Bernie! Bernie! Bernie!" Sanders said he'd seen the billboard, and that it "indicated that I was an extremist." And then he was ready for some fun, Bernsplaining for the GOP and Wisconsin Gov. Scott Walker what extremism actually is:

But our views, which represent in fact the vast majority of the American people, are a little different ... [ we say] to the billionaire class, you can't have it all. And what we are saying to the Koch brothers, Gov. Walker, and all of those people is that this great country, and our government, belong to all of the people, and not just a handful of very wealthy people.

Wonkette operative "Steve" reports from the total joke of a teeny little rally:

The rally was inspiring! His audacious plans could almost bring the US within shouting distance of Western Civilization (except for all of our religiosity). Paid family leave (12 weeks for moms and their sperm donors) & two weeks paid vacation for all. (I could hear my European friends shaking their heads that this would be a big deal.) Tuition free at state universities, a trillion dollar infrastructure jobs program, redistribution of wealth taken from working families and middle class for the last few decades. Full-throated support of organized labor, gay rights, and fair trade.

Some history lessons, too. A hundred years after people like my grandfather got their heads bashed picketing for the 40-hour week, we have too many working way more than that. People are not beasts of burden, he reminded us; we need leisure and time to think. He praised Pres. Obama for his move on overtime pay.

He put forward a positive agenda, never attacking Hillary although he did mention his not voting to authorize W's little Iraq war and the Patriot Act. He blasted Scott Walker over Real Family Values to the delight of the crowd.

It was a Democrat rally La Follette and FDR would have recognized, not like the weak sauce Clintonian Republican-lite faux Democrats that grovel for crumbs from the corporate overlords.

This is good stuff. Full speech is below; sit down with your government crab legs and your welfare air conditioner and watch the whole thing:

Yes, and if you really want to feel the Bern, right on your own bare chest-parts, give in to late-stage capitalism and order yourself one of these fine Bernie For the Future T-Shirts, which have been drawing crowds almost as enthusiastically as the real guy*. (*Not intended to be a factual statement.)