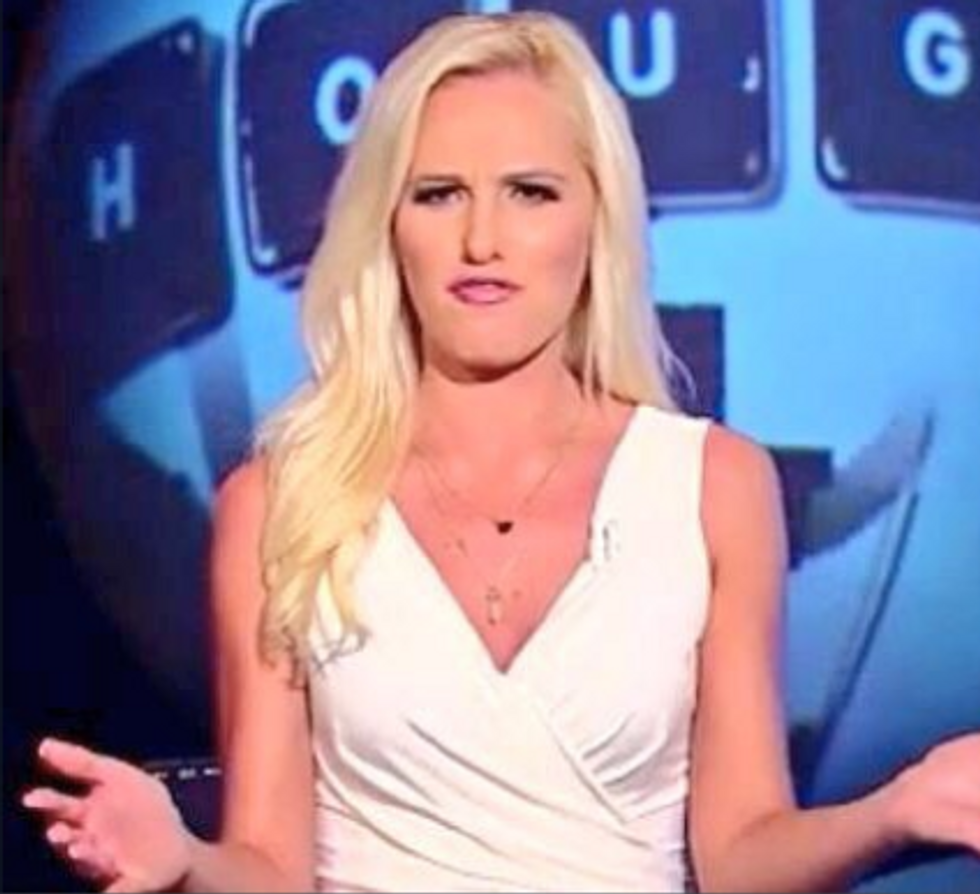 Video has surfaced of rabid rightwing Barbie Tomi Lahren getting water thrown at her as she leaves a Minneapolis restaurant hosting a hip-hop brunch. To be fair, it was water and it's clear in the video that it was nowhere near a full glass dousing. Maybe two tablespoons!

Fox News anchor Tomi Lahren had a drink thrown at her at a Minneapolis bar pic.twitter.com/XIDjwZfe6H

Never one to not use an affront to stay offended and play victim, Tippy Larsnilson has hit the airwaves and Twitter letting everyone know that she's "tough" and is taking it on the chin, and whatever she believes the high road to be. Again, it's water. Very little. No toughness required. Tupper just might be feeling some kind of way about folks having yelled "fuck that bitch" at her in front of her Mom and all but what did she expect of life outside of South Dakota and Fox News? This is the same trick that compared Black Lives Matter to the KKK, mind you. And she shows up at a hip-hop brunch?

Tuffy needs to know no one cares about her apologizing about "her whiteness," but she should prepare to be called out on her racism, hate and clueless entitlement. She's lucky she didn't get doused with a pint of fresh bacon grease! Or hot grits!

The frightening thing about Tipsy is that she is a 2018 incarnation of Carolyn Bryant Donham, the racist lying accuser of Emmett Till. She's not lying about the water, but she's an incendiary young racist white woman brought up to believe white is right, that she is coveted by all, and that she is entitled to say and do whatever she likes without consequence. This ain't 1955, Honey.

Taco, of course, is empowered by nasty ass Trump, who wasted no time in tweeting support for poor, poor Tribble (but it took him hella long to remotely acknowledge the bravery of young black man, James Shaw).

Everybody is with Tomi Lahren, a truly outstanding and respected young woman! @foxandfriends

Turkey of course took to Fox & Friends to dramatically discuss "the incident" and how the person that threw the water at her "just wanted their 15 minutes" of fame. Nope. They just wanted to let you know how much they don't like you Tom-Tom. The splasher of water is not alone in feeling this way.

Do I agree with everything Tomi Lahren has to say? No.

But do I feel that she should be able to visit my city without having a drink thrown at her during brunch? Also no.

Anyone that spews racist lying bigoted hatred for a living with NRA worship embedded in her brand needs to probably steer clear of hip hop brunches because you and the (no doubt) racist Mom that raised you aren't entitled to any respect from that community. Trefoil may have admitted to being pro-choice as her one redeeming quality, but folks outside of her white supremacist bubble will continue to let her know all about herself in any way they choose.

Wonkette is ad-free and supported ONLY by you. Please give us money for hip-hop brunch.