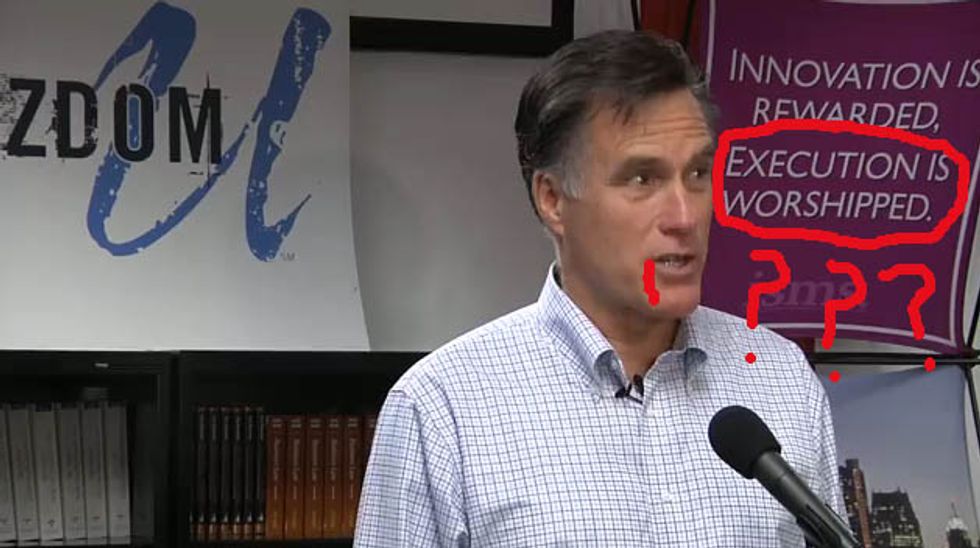 One thing the Republican presidential candidates love to do is talk about how they will bomb each and every Islamic Person, because the Islamic Persons might be plotting something against Israel, which is the only patriotic country outside of America's borders, because of the greatest American Action Hero, a mythological Jewish mystic who lived (?) in the region two-thousand years ago. But Mitt Romney is so bad at pretending to be a right-wing zealot that he even screwed up the Threatening Iran section of his campaign lies PowerPoint Presentation. Now the actual former chief spy of the Mossad -- the super-spy bosses of Israel -- says Mitt Romney isscrewing it up for Israel, by telling the Persian Demons exactly what a President Mitt Romney would do, if he somehow became president.

The funny thing is that everyone, even the Proud Iranian Nation, knows exactly what Mitt Romney would do if he became president: He would flip-flop, like a liberal!

WASHINGTON -- A former head of Israel's intelligence service, in an interview with The Huffington Post, slammed a recent op-ed by Mitt Romney as causing "serious issues" for the effort to prevent a nuclear-armed Iran.

Efraim Halevy, who was the director of the Mossad in the early 2000s and later the head of Israel's National Security Council, told HuffPost that by forecasting his military intentions -- and claiming that Obama would not act in the same way -- Romney is effectively "telling the Iranians, 'You better be quick about it.'"