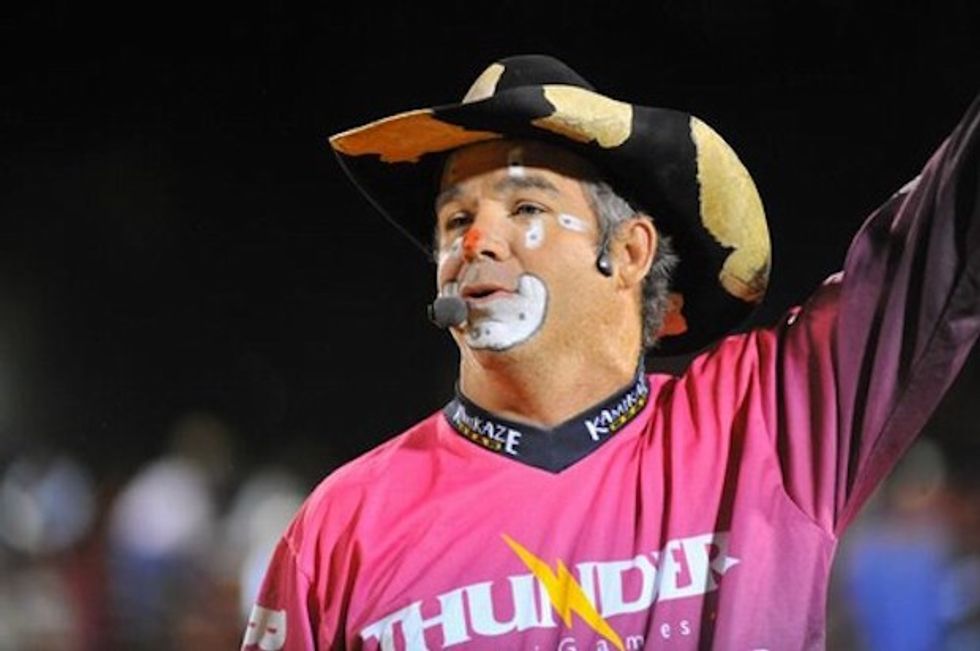 Rockin' Robbie Hodges is a rodeo clown. That is not a joke, like "AHAHAHA this person amuses us with his dumbness and thus we call him a rodeo clown," he is an actual rodeo clown, by trade. Here he is, in a barrel, which is a thing Wikipedia tells me rodeo clowns are known to do.

Yep, that sure is a guy in clown makeup, in a barrel. For reasons!

Last week, Hodges was at the Calhoun County Fair in Michigan doing his rodeo clown thing -- which, again, involves a barrel in some capacity -- when he decided it would be a good idea to go on a weird ass rant about how he is mad about transgender people for no apparent reason. Probably because he felt that, as a person who is a rodeo clown for a living, he should be judging other people for their life choices. He did this in front of a group of children he was supposed to be entertaining, demanding that they all acknowledge that they were the gender they were assigned at birth.

“You’re either a boy or a girl, y’all understand? If you’re confused you need help. Here at the rodeo we are not gender friendly. Everybody in here who’s really sure they’re a boy raise your hand. If you can tinkle on a fire you go to the boys’ room, if you can’t, you go to the girls’ room, right?”

Gee, and people wonder why kids (and some grown-ass women in their 30s) are so often terrified of clowns!

Why Won't Barack Obama Just Shut Up About This Rodeo Clown Already?

So far, Hodges has not explained what prompted him to go on such a tangent, but my working theory is that his wife was cheating on him with another rodeo clown and was certain that if he went on a weird rant about how he doesn't like transgender people in the middle of his show, that her lover would reveal himself. Although given the lack of stabbing people to death at the end, I could be wrong -- but from what I know about clowns and their ways, this is usually how things go.

Here's a report on the incident from Michigan's Fox47, complete with video of Rockin' Robbie's rant:

The video was sent to a local television station by a mother whose child was in the audience, and who was pretty confused about why a freaking rodeo clown would be going on a weird rant about how people should pee at a state fair. Hodges, who was an independent contractor, was promptly dismissed by his employer, Lost Nations Rodeo, which released the following statement to the press:

“Lost Nations Rodeo was unaware that those comments would be made, and were off script. Hodges is a well-decorated entertainer, and while we appreciate his services, we do not share the same views or opinions. We sincerely apologize again to all of our fans and look forward to entertaining you in the future.”

Now, not to suggest that Hodges's comments were in any way acceptable or not horrible, but even I have to admit that there is something oddly apt about them coming out of the mouth of a possibly inebriated rodeo clown? I don't know. There is just something about statements like "If you can tinkle on a fire you go to the boys’ room, if you can’t, you go to the girls’ room, right?" that -- to me -- just sound like a thing a sad, drunk rodeo clown would say, and not really anyone else less ridiculous than that.