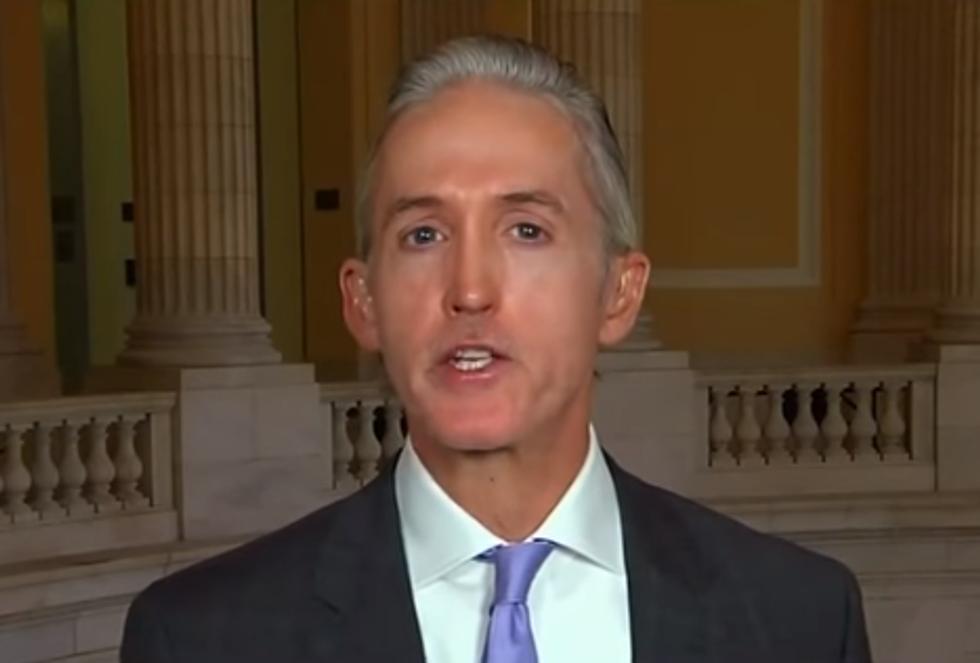 BENGHAZI!!!11!!1! BENGHAZI!!11!!1!eleven1111!!! South Carolina Republican idiot congressman Trey Gowdy, along with his band of dickweasel malcontents in the GOP, have been screaming that ever since Hillary Clinton personally caused FOUR DEAD AMERICANS in the tragic terrorist attack in Benghazi, Libya, that actually, #historyfact, was not caused by Secretary Clinton. And investigation after investigation after investigation -- including the current one, THE EIGHTH ONE, led by Gowdy and the House Select Committee on Benghazi -- has found absolutely no wrongdoing on Clinton's part.

But FOUR DEAD AMERICANS! And HILLARY! And EMAILS! Gowdy's belief seems to have been that Clinton did something so bad, something that, if done differently, would have saved those lives. But now he admits that, nah, he's just fucking wasting all our time.

Let's see how this went down on the Fox News:

PERFECTLY COIFFED FOX NEWS MAN: There's a report that's floating out there that says that your attorney, General Dana Chipman, said from the beginning that nothing could be done to save the four Americans in Benghazi in September of 2012. Is that true?

GOWDY: Uh? No, sir, Dana Chipman is an honorable good man, he served this country with great distinction, and he served our committee with great distinction. That was a transcript of one question he asked Leon Panetta and Jeremy Bash. When you see the full transcript, AND YOU WILL, then you will see what Dana was talkin' about was a very small point. The posture of the troops, the order that was given by Panetta and the president, how that order was received. All of that is what we wanna ask people about. Whether or not they could've gotten there in time, I don't think there's any issue with respect to that. They couldn't. The next question is why could you not? Why were you not positioned to do it?

Well godblessit, ya little redneck, that's a long, drawlin' roundabout way of saying, "No, and I apologize to America for wastin' everybody's time for so fuckin' long, I will leave public service forever and find a job I am better suited for, like makin' taxidermied beavers kiss each other on their purty mouths."

As Right Wing Watch points out, the other investigations have found that the military couldn't really have done anything more that night. Moreover, despite all the GOP lies, damn lies and insinuations that somehow the president and Hillary "ordered the military to 'stand down' rather than come to the aid of the Americans who were under attack," there was never a shred of evidence for that. The attacks were awful, but it certainly wasn't the first time an American interest abroad has been attacked.

In the endless Benghazi hearing, Hillary stated repeatedly that, despite how she was SO planning on catching up on all the episodes of "The Good Wife" on her DVR that day, she was happy to be there, because her heart was broken for the people we lost that day, and she wanted the American people to honestly, somberly work together to keep things like this from happening again. If you'll remember this part of her opening statement:

We should debate on the basis of fact, not fear. We should resist denigrating the patriotism or loyalty of those with whom we disagree.

So I’m here. Despite all the previous investigations and all the talk about partisan agendas, I’m here to honor those we lost, and to do what I can to aid those who serve us still.

My challenge to you, members of this committee, is the same challenge I put to myself: Let’s be worthy of the trust the American people have bestowed upon us. They expect us to lead, to learn the right lessons, to rise above partisanship, and to reach for statesmanship. That’s what I tried to do every day as secretary of state, and it’s what I hope we’ll all strive for here today, and into the future.

[wonkbar]<a href="http://wonkette.com/595254/what-the-benghazi-hearing-taught-us-republicans-are-dicks-hillary-already-president"></a>[/wonkbar]What a monster. Of course, by the end of that day, Hillary looked presidential as fuck, and Gowdy looked like the flopsweaty pantload of backwoods hick resentment he always did, except he had to admit that his little Benghazi hootenanny hearings revealed No New Information.

[wonkbar]<a href="http://wonkette.com/601217/pentagon-officially-sick-of-your-benghazi-sht"></a>[/wonkbar]And now, with the Pentagon seemingly ready to Gitmo the asses of all of the Republican members of the Benghazi committee for wasting America's time and money, Gowdy admits that oh well, guess nothin' coulda been done anyhow, well shucks.

Bless his heart, by which we mean Trey Gowdy needs to go fuck himself with the back end of one of them taxidermied beavers.