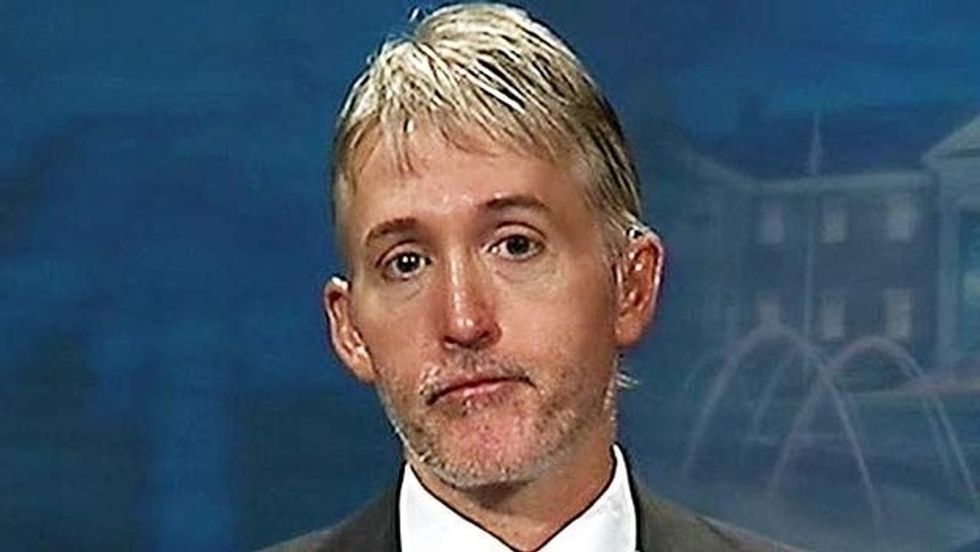 Not obsessed with Benghazi.

Wednesday, Democratic Rep. Elijah Cummings, ranking member on the House Oversight Committee, revealed in a letter to committee chair GOP Rep. Trey Gowdy that a whistleblower had come forward to say that DURING THE INAUGURATION, like for real in the middle of it, disgraced literal actual foreign agent Michael Flynn was texting his BFFs talking about "YEE HAW, WE DONE STRUCK OIL!" What he meant by that is that Trump, now that he was president, would "rip up" all the Russian sanctions, thereby freeing Flynn, his business partners, and a bunch of Russians to get rich by slicing up the Middle East and stealing its resources. (Did you read that post? It is HOLY SHIT. If you haven't read it, do so now.)

In Cummings's letter to Gowdy, he was a bit snarky about Gowdy's "previous refusal to investigate" new evidence about Flynn, and said Gowdy's excuse that he didn't want to interfere with special counsel Robert Mueller's investigation is now null and void, since Mueller specifically gave the go ahead to look into this whistleblower, so subpoena these Trump fuckers for all their Flynn dirt RIGHT NOW. Cummings also noted that Trey Gowdy's attitude about this investigation is a far cry from how he felt about sticking his nose in things when it involved Hillary Clinton and BENGHAZI!!!1111!!!!11!!

Gowdy, a craven shitheel, has now responded to Cummings's letter, because THEM'S FIGHTIN' WORDS, ELIJAH! YOU DO NOT MAKE FUN OF TREY GOWDY'S BENGHAZI INVESTIGATIN' SEXXX CLUB WITHOUT SUFFERING THE CONSEQUENCES! It is a very stupid response, and this tweet is attached to it:

Yeah, well, investigating whether the sitting president and his associates conspired with an enemy nation to steal American democracy (and it seems like they did!) does seem like a better use of resources than investigating Benghazi one million times for sport, a probe House Majority Leader GOP Rep. Kevin McCarthy FUCKING ADMITTED was a witch-hunt meant to tank Hillary Clinton's political prospects.

Lord have mercy, Gowdy's making our blood boil and we haven't even gotten to the actual letter. Let's do that:

"You claim to have already had ex parte communication." PFFFFFFFFT. As if Trey Gowdy is the boss of sexting Robert Mueller and Elijah Cummings should have to ask permission, PFFFFFFFFFFFFFT.

A bit later, Trey Gowdy started airing Festivus grievances over how Trey Gowdy is not obsessed with Benghazi, ELIJAH CUMMINGS IS OBSESSED WITH BENGHAZI. No shit, he wrote that:

Oh good Christ. We do not know how Trey Gowdy's letter-writing paper did not burst into flames.

Glad he got in his little point, though, about how if he didn't do his never-ending Benghazi investigations, nobody would know about the server, because that would truly have been a fate worse than we are experiencing right now at the hands of Donald Trump. The world is literally fucking burning, the Middle East is rioting because Donald Trump decided to punch the Arab world in the face for no reason, but please, tell us more about how Trey Gowdy's Very Good Work prevented us from a worse fate, which is Hillary Clinton sitting in the Oval Office EMAILING.

We know Elijah Cummings wasn't expecting a mature, reasonable response from Gowdy. Cummings is not an idiot. This was more, "Hey look, America, I am sending a letter to this dipshit and you should read it too!" But Gowdy's response is ridiculous, even by his debased standards.

Meanwhile, what is Trey Gowdy worried about? What's got the dead opossum pelt on his head ALL A-TINGLE? Oh, it is just the new stupid wingnut conspiracy theory that because Robert Mueller fired a guy from his team for sexting mean words about Donald Trump, that means Mueller is BIASSSSSS against Trump. No, it doesn't make sense, because none of their conspiracy theories make any sense. But it gives Republicans a squirrel to chase and a fresh new leg to hump, so it works.