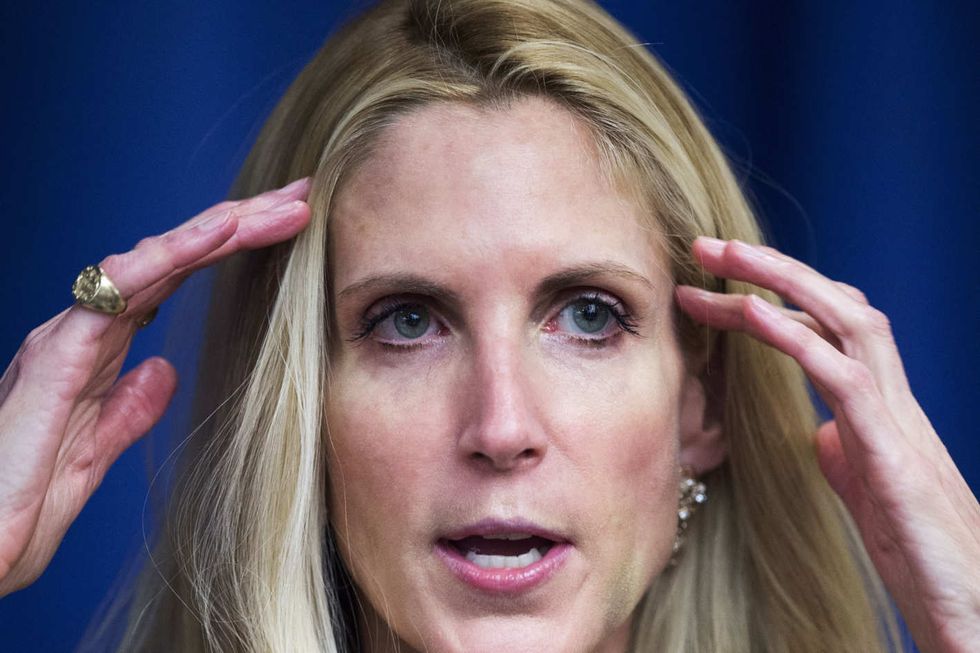 It was just last year that Ann Coulter finally met her man. A seething rage demon not unlike herself, who promised her flowers and candy and trips to Paris and a massive deportation force breaking down the door of every brown person in American demanding to see their papers or get out. They had a lot in common, things like hate and people wondering if they were actually Andy Kaufman playing a huge joke on the country, a love for the white people of this country, and a tendency to say completely fucking bizarre things on a regular basis. Ann thought she'd finally met a man she could trust with the black, rotting cavities where a person's heart and soul would traditionally be. She loved him so much, she wrote a damn book about it, like she was Anäis Nin or some shit. But it was not to be, and this knight-in-shining betrayed her and left her at the altar AND NOW SHE IS FUCKING PISSED.

Yes, just as Ann released her book, "In Trump We Trust" -- about how we should all just trust Donald Trump to do whatever -- Trump broke that trust and destroyed her beautiful dream of getting to watch all 11 million undocumented immigrants in this country tossed out like so many DJ Jazzy Jeffs.

You see, when chatting with fellow garbage monster Sean Hannity, Donald Trump finally admitted that people had told him that it might actually be pretty hard to deport 11 million people from the country, and he suggested he might let some of the ones who aren't criminals stay "legally" without ever being granted citizenship.

(It will be difficult to determine which immigrants are criminals, since Trump believes that police are forbidden from arresting illegal immigrants and charging them with crimes, which we are pretty sure is not a thing. What? Is he gonna do some kind of "Are you a criminal, check yes or no!" survey?)

Now, some Trump supporters might claim that this is simply a "432789D Chess" move meant to make himself more appealing to moderates so that he can become president and get rid of all the immigrants. Others claim that his original proposition was merely a "Door In the Face" play whereby he asks for something ridiculous like deporting 11 million immigrants and then gets to negotiate down. BUT ANN IS NOT BUYING IT.

Tearfully, the jilted hater posted a series of tweets last night decrying Trump for betraying her and their mutual passion for deporting 11 million people:

It was at this point that Ann finished off her last bottle of Pinot Grigio and slumped over, quietly singing Fleetwood Mac's "Go Your Own Way" to herself before suddenly remembering that Fleetwood Mac was a Clinton-y band and bursting into tears again.

Can they ever rebuild the trust that was lost, the passion that was once there? Probably! Because given Trump's tendency to erratically change his position on things, he will probably go back to insisting he's going to deport 11 million people again tomorrow. Or later today, if he hasn't already.