Trump Advisor: Donald's VP Has To Be A White Guy Because Affirmative Action 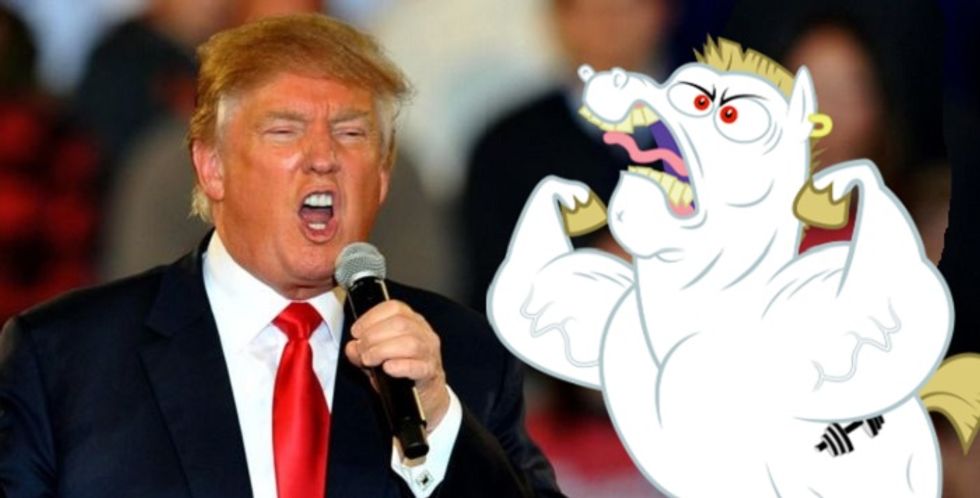 Don't joke about the size of his wings. He's hung like a...

Paul Manafort, Donald Trump's brand new campaign chairman and chief strategist, offered a very important hint about the shortlist of Trump's possible vice presidential candidates: It's all white men, because that's just the way it has to be. Sorry, Oprah, Donald might have considered you, but all this stupid affirmative action and political correctness has simply made that impossible. You really needed that job, but Donald has to give it to a white man lest he be accused of "pandering."

In an interview with HuffPo, Manafort told Howard Fineman there really wasn't much choice: going with a woman or a minority Veep pick is not in the cards. “In fact, that would be viewed as pandering, I think.” We certainly can't have that.

As everyone knows, Donald Trump does not pander. Like when he pretended for a while he was a huge Christian, and that his favorite passage in the Bible was between him and God, especially if he was asked about it in public. But he sure did like waving a Bible around -- his very own personal Bible, he loudly announced -- in a completely non-pandering way. And then he finally found his favorite Bible verse, which turned out to be a couple different ones: the one about all the people who envy him, (which doesn't actually exist in the Bible), and later, his real favorite, "Two Corinthians."

Gun owners? Absolutely no pandering there, with his speech to the NRA warning Hillary Clinton would "abolish the Second Amendment." No way was he trying to say exactly what those folks wanted to hear.

He also wouldn't dream of pandering to women, because that's Hillary Clinton's thing -- it's really all she has -- although if he wanted to pander to women, he could, because all the women love him the most, and he does great with women.

Would he pander to The Hispanics? Heaven forbid! It certainly wasn't pandering when he celebrated the famous Hispanic holiday of the Cinco de Mayo, because he just naturally loves the Hispanics in that decidedly non-pandery manner of his:

He can even think of ways to combine groups that he's not pandering to, like that time he completely refused to pander to Miss Venezuela, and proved it with cute nicknames like "Miss Piggy," "Miss Eating Machine" and "Miss Housekeeping." No way did she ever think he was trying to butter her up.

So maybe he panders a little. We never said he was any good at pandering, which is really his larger point.