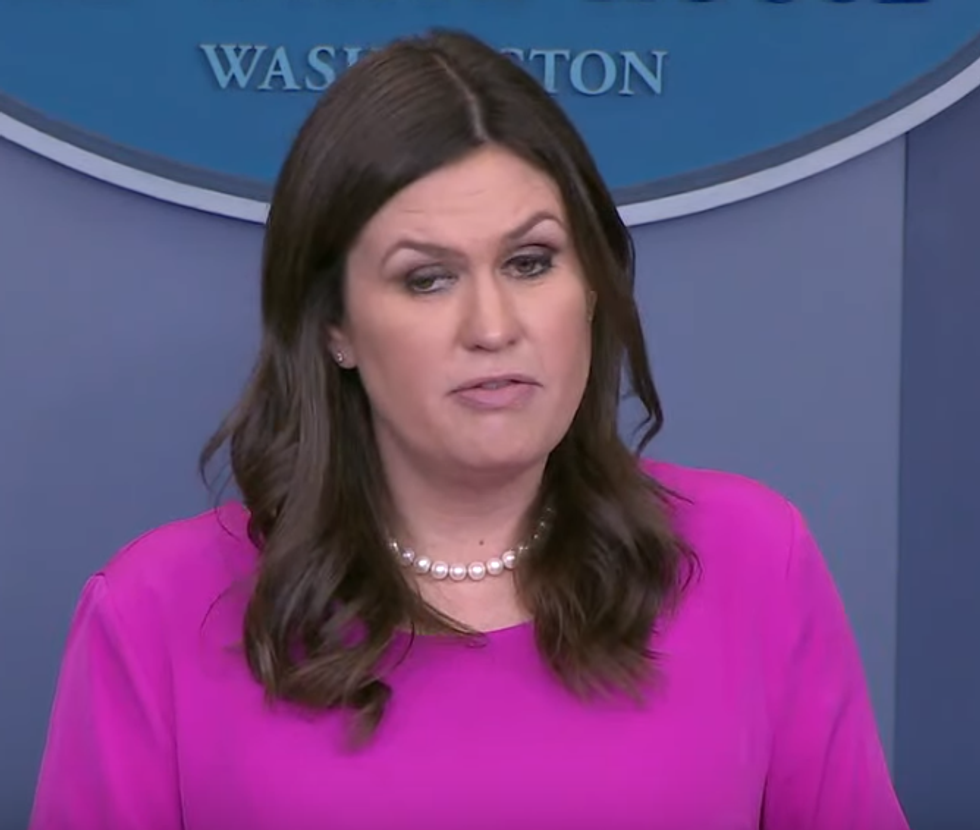 Hooray! The White House is ready to do a compromise on immigration, where in exchange for a fair deal on DACA, President White Supremacist gets some real policy related to the bigoted code words he's been taught by fellow white supremacists like Tom Cotton and Stephen Miller. For example, END CHAIN MIGRATION! People who aren't white supremacists call that "family reunification" but "family reunification" doesn't sound enough like "chain gang," you know? "BUILD THE WALL!" People who aren't white supremacists call that "a laughably stupid and ineffective idea." And so on!

Anyway, Sarah Huckabee Sanders briefed the press Tuesday afternoon and made sure from the get-go that everybody knows that, even though the White House REALLY OMG WANTS to protect the DACA people, the actual bipartisan compromise bill on the table, from Republicans Lindsey Graham and Jeff Flake and Democrat Dick Durbin, is BAD and DEAD ON ARRIVAL and Trump HATES IT.

(You don't really want to watch the video, do you? Fine, we won't embed it.)

I'd like to leave no doubt where the White House stands on the Flake, Graham and Durbin agreement on immigration reform. In the bipartisan meeting here at the White House two weeks ago, we outlined a path forward on four issues: serious border security, an end to chain migration, the cancellation of the outdated and unsafe visa lottery, and a permanent solution to DACA. [She didn't mean "permanent solution" like the Nazis meant "final solution." ALLEGEDLY. -- Ed.]

Unfortunately the Flake-Graham-Durbin agreement does not meet these benchmarks. In fact, it would not secure our border, encourage more illegal immigration, increase chain migration and retain the visa lottery system. In short, it's totally unacceptable to the president, and should be declared dead on arrival.

OK OK, Sanders, we get it, Trump has been informed by John Kelly that Trump does not agree with the bipartisan compromise deal, WE GET IT.

Shuckabee later told journalist Mara Liasson that Trump REALLY REALLY REALLY wants to see an end to "chain migration," and declined to give a real answer when asked if Trump is going just start kicking DACA recipients directly in the face and kicking them out of America in March if President Baby Trash doesn't get what he wants. This echoed what Shuckabee said in her Monday press briefing, that the White House is "hopeful we don’t have to do that and we don’t have to get there." Then she immediately blamed the Democrats for being somehow "unserious" about giving Trump everything his little black heart desires. (Remember, Chuck Schumer and the rest of the Democrats have already said Trump can cram his fucking wall all the way up his orange asshole, since the GOP refused to deal during the shutdown.)

Deputy White House Press Secretary Hogan Gidley (yes that is a real human name) also said to Fox idiot Laura Ingraham this week that the Graham-Durbin compromise is bad, because it doesn't even kick DACA people's parents out of America. How can Trump #MAGA if he can't break up immigrant families? Pffffffft.

Now, to be clear, Donald Trump does not know what Donald Trump wants on immigration. Donald Trump only knows what Stephen Miller and John Kelly whisper into his frontbutt at night, allegedly. BUT STILL, Lindsey Graham and Dick Durbin and Jeff Flake better be ON NOTICE that their bill ain't gonna fly with President Policy Expert, Reader Of Documents.

Now, of course, if the Senate wants to pass its compromise and somehow it manages to get through the House (LOLOL), Wonkette sees a way to get Trump to sign it:

There are advantages to having a stupid, thin-skinned, malleable attention whore for a president. USE THEM, BOYS.