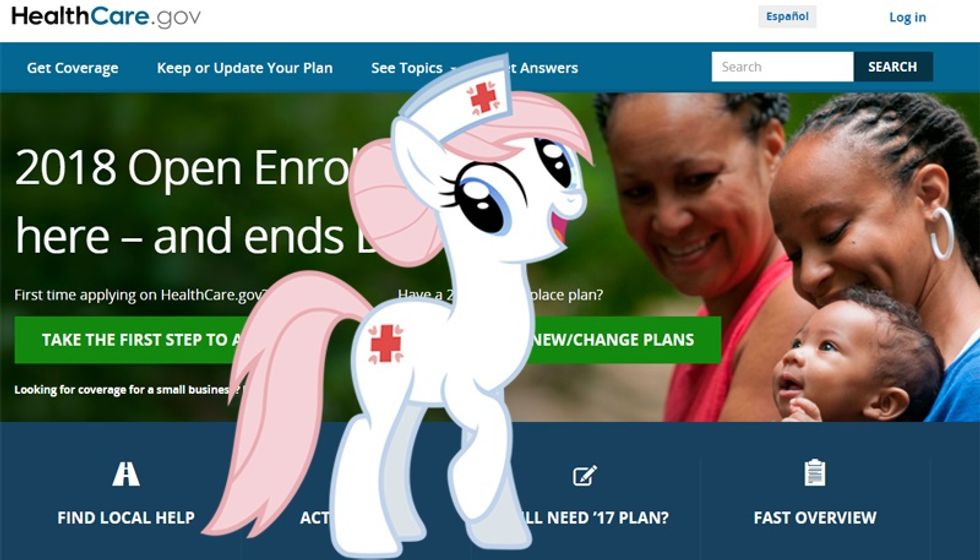 This news is worth adding a Pony.

We actually did not see this coming: It turns out that the first week of enrollment on Healthcare.gov has set a record, more than doubling the number of people who signed up on the federal healthcare exchange last year.

Over a million fewer people will sign up for the ACA this year due to advertising cuts. Trump considers that a good start.

That jump in early enrollment comes even though the Trump administration has made a priority of sabotaging the Affordable Care Act by cutting the open enrollment period from three months to six weeks, cutting the funds for advertising open enrollment by 90 percent, prohibiting federal employees from appearing at outreach events, and canceling a key subsidy that helps cover low-income enrollees' out-of-pocket costs. And yet, in what might -- might -- be a healthcare equivalent of the climax of How The Grinch Stole Christmas! Trump couldn't stop Health Insurance from coming this year:

More than 200,000 Americans chose a plan on Nov. 1, the day open enrollment began, according to one Trump administration official. That’s more than double the number of consumers who signed up on the first day of enrollment last year. More than 1 million people visited HeathCare.gov, the official federal website, the official said, amounting to roughly a 33 percent increase in traffic compared with 2016.

Those numbers only measure people signing up on the federally run exchange, but the Washington Post also contacted officials from several of the dozen states which run their own exchanges, who also said that enrollment has been up from last year.

Here's Barack Obama, A Real President, Reminding YOU To Sign Up For Health Insurance

Barack Obama would like to have a word with you about that little healthcare law that really did make America greater.

This is really encouraging, since many healthcare experts had been concerned that enrollment would drop this year due to the administration's attempts to sabotage the ACA. It might also be too soon to celebrate, since it's unclear whether the jump in first-week signups is due to media coverage of Trump's attempts to kill off Obamacare, consumer worries that the program may be cut, or simply a crush of people who have been paying attention to the fight over Obamacare rushing to sign up sooner rather than later. Heck, we're even willing to credit the volunteer efforts to spread the word about ACA enrollment, like those plucky Obama HHS veterans at Get America Covered! (They got Barack Obama Himself to make that video encouraging people to get to the federal and state exchanges to enroll.)

The results from states with their own exchanges are encouraging so far: California's first-week enrollment is up 25 percent over last year, which is impressive considering that Covered California will actually keep enrollment available until January 31, 2018. And Rhode Island's enrollment in the first week is up five times from last year's:

An early outreach campaign by the state seems to have paid off with more than 500 people enrolling, compared to 109 people in the first week last year.

“We felt very strongly that we had to get out there earlier than in previous years,” [HealthSource R.I. director Zach] Sherman said.

The District of Columbia also runs its own exchange -- where members of Congress and their staff are required by the ACA to purchase their own insurance -- and it's also seeing the highest enrollment since the first year the ACA went into effect, again probably due to aggressive outreach efforts.

Even super-red Idaho -- which set up its own exchange so it wouldn't have to depend on the damned terrible federal government, grrr (this has caused some infighting among Gem State Rs) -- reports a boost in first-week interest, though not as big as elsewhere:

Idaho officials say that web traffic spiked by 10 percent and call center volume was up 5 percent during the first three days of open enrollment, compared with the same period last year [...]

Of course, Trump will do what Trump will do, so might want to hold off on singing that "Fahoo Fores, Dahoo Dores" song until we get to December. And in the meantime, you can also get involved by joining up with Get America Covered, which is organizing "Get Covered Street Teams" in communities everywhere. It's better than waiting for Donald Trump's heart to assume a normal human size.

Yr Wonkette is supported by reader donations. Please click here to toss us some money with which to keep Yr Wonkteam covered!