Trump Couldn't POSSIBLY Have Weird Russian Ties After Syria Attack, Could He? Naaaaaah. 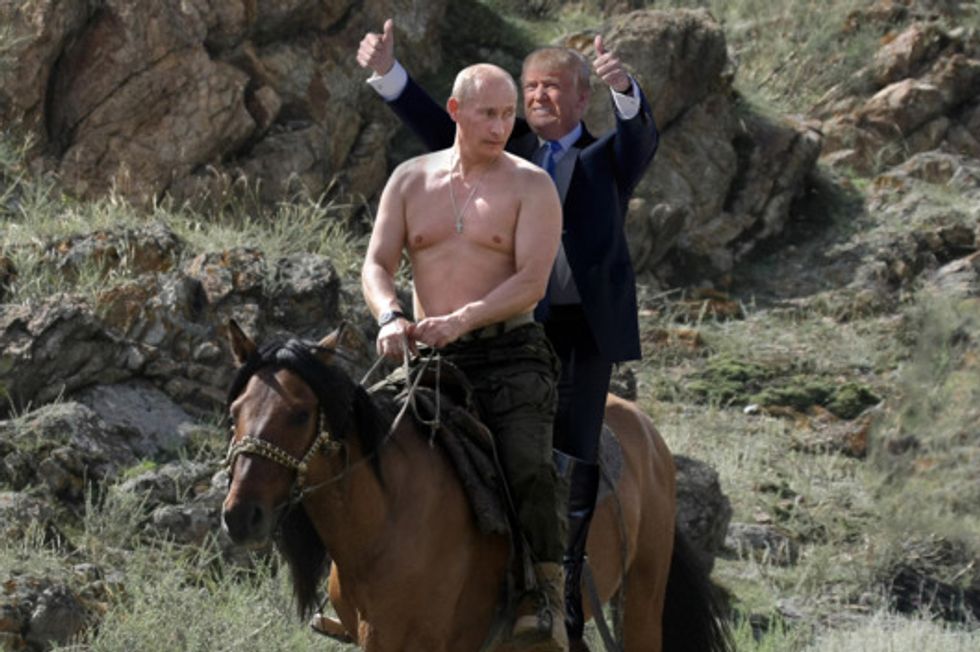 On Monday, Donald Trump was a president with a 34% approval rating, mouthing off about how President Obama did "wire tapps" to him and former NSA Susan Rice did "unmasking" to his dearly beloved inner circle, all the while being under multiple investigations for colluding with Russia to steal the 2016 election. But all that existed in a pre-4/4 world, before Bashar al-Assad gassed and killed more than 70 people in Syria's Idlib province. Of course, Assad has murdered eleventy million people, so that's not new. Back in 2013, Assad was committing atrocities, and Donald Trump, then just a simple puss-grabbing reality TV star, was SQUARELY against U.S. intervention.

But this time, something was different! Now, perhaps Trump was just talking out of his ass about something he knew nothing about in years past (perish the thought), but suddenly this week, he realized real people, even children, are getting murdered, and he got the feels and started humming "Jesus loves the little children, even itty bitty brown babiiiieeeees who are gross" while he rained down bombs on a mostly abandoned airstrip in Syria a mere TWO DAYS LATER.

And why was the airstrip mostly abandoned? Well, because we let Russia know beforehand, and Russia and Assad are BFFs. Now, Trump sort of had to let the Russians know, because we've been adhering for several years to the myth that the U.S. and Russia are on "the same side" in this conflict, so we can't let any "friendly" fire happen, heck nope! So Russia let its pals in Syria know 'Murica was a-comin' for its airstrip, so they got all their shit out and ghosted, and now we have fully delivered justice for those little bitty babies' deaths, yeah? Sure, let's go with that.

And now things are happening fast! Fox News's Bret Baier says there is a Russian ship coming after the U.S. American Navy ships in the Mediterranean, the ones what did the bombs!

WHOA IF TRUE, ARE WE SUPPOSED TO BE A-SKEERED? Now, it could be just that we did a thing, and now Russia has to do a thing to show its pal Assad that it is doing a thing, and flexing Russia boat muscle in the Mediterranean is a good enough thing. Or maybe Russia is just posturing REALLY GOODLY, to see what Trump will do. Or maybe they are just playing their part, the same way we played our part by getting so mad about Assad using chemical weapons against his people for the millionth time ever, and started dropping bombs on an empty desert.

Oh hey, scoop from the AP:

Senior military officials say the U.S. is looking into whether Russia participated in Syria's chemical weapons attack earlier this week.

The officials say Russia has failed to control the Syrian government's use of chemical weapons.

They say a drone belonging either to Russia or Syria was seen hovering over the site of the chemical weapons attack Tuesday after it happened. The drone returned late in the day as citizens were going to a nearby hospital for treatment. Shortly afterward, officials say the hospital was bombed.

First, that is fucked the f up. Second, did "senior military officials" say that, like common anonymous sources who demand anonymity? Well, if "senior military officials" are right, and the Russians helped gas Syrian beautiful little babies, then they DEFINITELY could not be in cahoots with Donald Trump, the good and pure American president they've never met, ever, and who is definitely not under multiple investigations for possibly colluding with Russia to steal the 2016 election. Also too, United Nations Ambassador Nikki Haley said to the UN on Friday, "GRRRR RUSSIA" and "ARGH IRAN," and "Fucked y'all up the one time, gon' do it once again if y'all keep actin' ugly!" Does that sound like an American administration that is in gay love with Russia?

And now the media is falling all over itself to cheer-lead for WAR WAR WAR, and Republican senators and congressmen who were 100% against the U.S. intervening in Syria when Obama was president are -- hundreds of thousands of dead bodies later -- suddenly singing "The Battle Hymn Of The Republic" and that shitty Lee Greenwood song, as they all fall in line behind their Dear Leader Trump.

Just ... hmmmmm. Either this is just a very convenient confluence of events, or this is a well-choreographed dance that's going off BIGLY.

What was Trump's approval rating just before all this again? Oh yeah, 34%, like we said. And what country is the FBI investigating Trump for colluding with during the election? Oh that's right, it is those Russian bastards. And what is everybody talking about now? Not that Trump Russia stuff!

We're not saying Putin's FSB helped Assad do a little chemical weapons attack in Syria to give Trump a chance to distance himself from Putin and ratchet up a little healthy (and make-believe) tension between America and Russia, but we're not not saying it either.