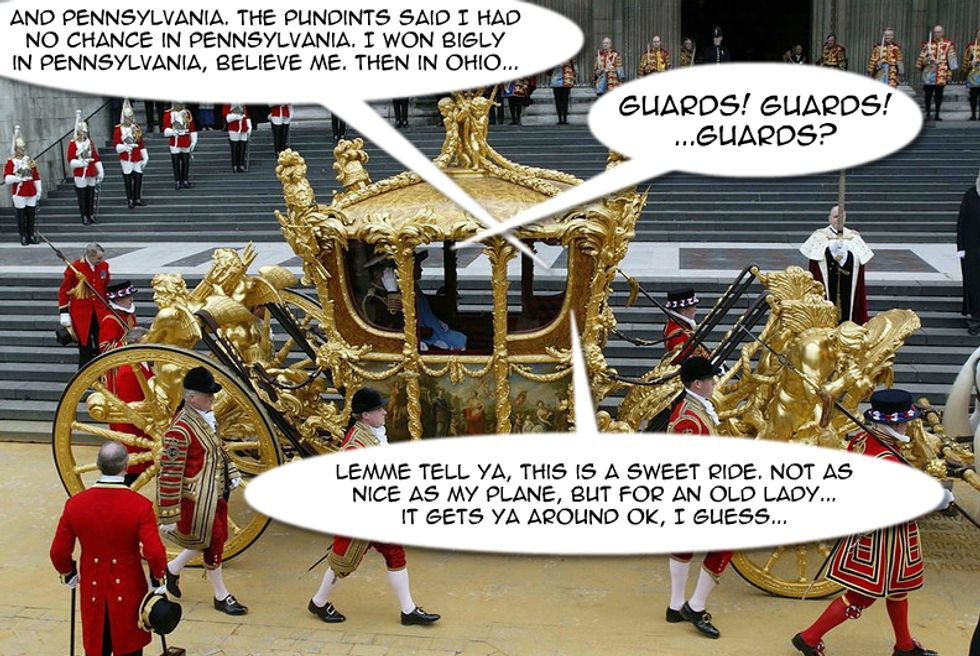 This thing have a minibar? I could really go for some pretzels.

The White House is vehemently denying a story published in the Times of London over the weekend, which cited unnamed officials as saying Donald Trump had demanded a ride with Queen Elizabeth in the royal carriage as part of his planned visit to the United Kingdom in October. Not true at all, said an unnamed White House spokeswoman in a reply to People magazine, and who are you going to believe, some snooty British newspaper or a good decent American celebrity gossip magazine that can be found in every dentist's office nationwide?

The Times reported that while Barack Obama was just fine with riding in his own armored Cadillac, Trump wants the full royal treatment, which has British security sources all in a tizzy:

One source said that Mr Trump’s decision to opt for the carriage, rather than the bullet and bomb-proof car that was used by his predecessor, presented a range of fresh headaches.

The source said: “The vehicle which carries the president of the United States is a spectacular vehicle. It is designed to withstand a massive attack like a low-level rocket grenade. If he’s in that vehicle he is incredibly well protected and on top of that it can travel at enormous speed. If he is in a golden coach being dragged up the Mall by a couple of horses, the risk factor is dramatically increased.

“There may well be protections in that coach such as bulletproof glass, but they are limited. In particular it is very flimsy.

“It would not be able to put up much resistance in the face of a rocket propelled grenade or high-powered ammunition. Armour-piercing rounds would make a very bad show of things.”

Well! Honestly, it sounds like The Times got themselves an interview with Q, but James Bond's weapons expert may or may not have actually known whether Trump had insisted on a ride in the royal carriage. The rest of the story is also about the potential sticky wicket Trump's visit could pose for security, without any further details on what exactly Team Trump insisted on as a condition of slumming with a mere queen, who has never built a skyscraper in her life. Then again, it does sound like the sort of thing Donald might insist on, as well as demanding real American fast food for the duration of his visit.

The unsourced denial was similarly lacking in detail:

“We have not even begun working on details for this trip,” the spokeswoman said.

This is only the latest in a long series of denials of stuff by the Trump White House, which has also denied many other things, including:

There may be one or seventy more examples that slipped our mind as well.

Wonkette likes big donations, and we can't deny we're no good at rap parodies. Please click the linky below the story to support quality journalism, as well as whatever this piece was.

[Times of London / The Week / People]