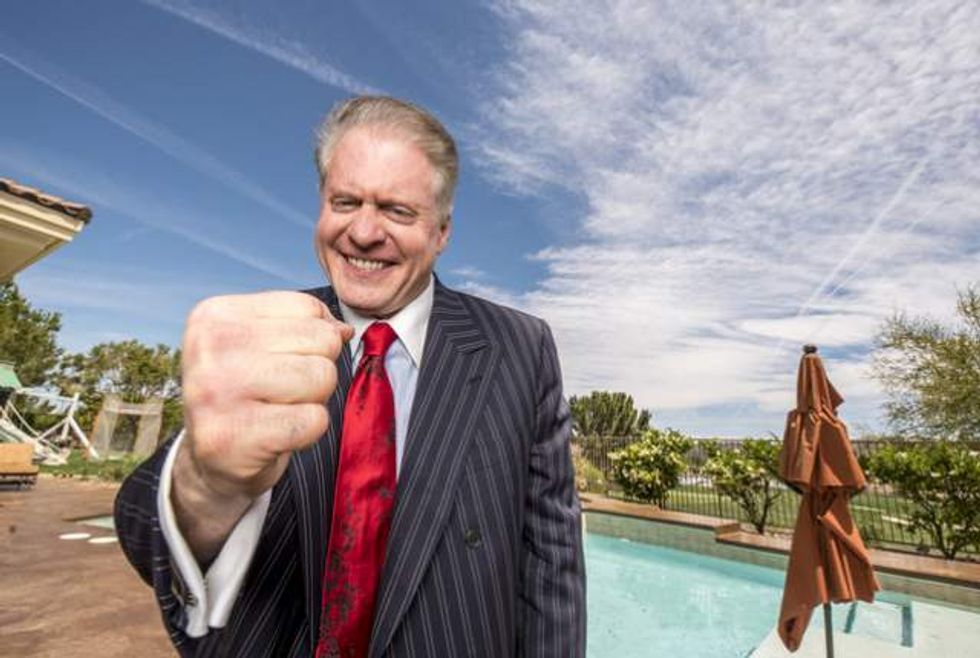 Meet Wayne Allyn Root! He is a guy who does a lot of stuff for Donald Trump, like acting as Master of Ceremonies or being the opening speaker at many of his campaign rallies! He is also the author of a book titled "ANGRY WHITE MEN: How the Donald Trump Phenomenon is Changing America—and What We Can All Do to Save the Middle Class" all about how white men have the right to be angry about stuff! Why?

It sure is good to know our plan is succeeding!

Root has some really interesting ideas about stuff, as you might imagine.

One of those ideas is to take voting rights away from anyone who gets any kind of benefit from the government -- including copay-free birth control under the Affordable Care Act which is not in any way subsidized by taxpayer money, actually, and is paid for by insurance companies!

Due to the fact that birth control with a copay no longer is a thing, this would prevent literally all women who take birth control from voting. Genius!

You see, Wayne Allyn Root saw a map that said if only "taxpayers" (the kind that get zero means-tested benefits) had voted, then the Republicans would have won 2012 in a LANDSLIDE. Probably this one, which is the very first and pretty much only Google result for a map like that:

However, there is a bit of a problem with that map! Because, as David McElroy (who wrote the original article) notes in a correction at the top of his piece, this was actually a map showing what the election would have looked like if only white men were allowed to vote! No matter, because that is kind of what Wayne Allyn Root is getting at anyway. Because you see, if poor people and sluts who love their free whore pills were banned from voting, Republicans would win like, all of the elections basically. Which is only fair!

“So if the people who payed the taxes were the only ones allowed to vote, we’d have landslide victories,” he said, “but you’re allowing people to vote. This explains everything! People with conflict of interest shouldn’t be allowed to vote. If you collect welfare, you have no right to vote. The day you get off welfare, you get your voting rights back. The reality is, why are you allowed to have this conflict of interest that you vote for the politician who wants to keep your welfare checks coming and your food stamps and your aid to dependent children and your free health care and your Medicaid, your Medicare and your Social Security and everything else?”

Well, you know what they say -- if you can't con people into voting against their own best interest, prevent them from voting in the first place! It is a lot harder to convince poor minorities and women from voting against their own self-interest than it is to convince poor white men to do so, namely because there's no "Sure, you'll be poor as hell, but you'll get to be better than those people over there!" pot 'o' gold at the end of that rainbow.

Though Root quickly amended his statement to note that people on Social Security and Medicare should be allowed to vote still, he said that participation in any other kind of entitlement program should mean you are not entitled to vote! Although we assume he would make exceptions for any nice white farmers who take advantage of the $20 billion the government doles out in agricultural subsidies! Because hey, they probably vote Republican, anyway!

“But all the other stuff, all the other goodies, free Obama phones, free contraception, you know what, you can get them but you shouldn’t be allowed to vote, it’s a conflict of interest. Take that away, we’d win every single election in this country.”

Huh. That is some very interesting logic there! Is is a conflict of interest, I wonder, when super wealthy people vote for candidates who will lower taxes on the rich and wish to eliminate the estate tax? Probably not!

This definitely seems like a position that Donald Trump should adopt and run with. I really can't see a single thing going wrong for him if he does.