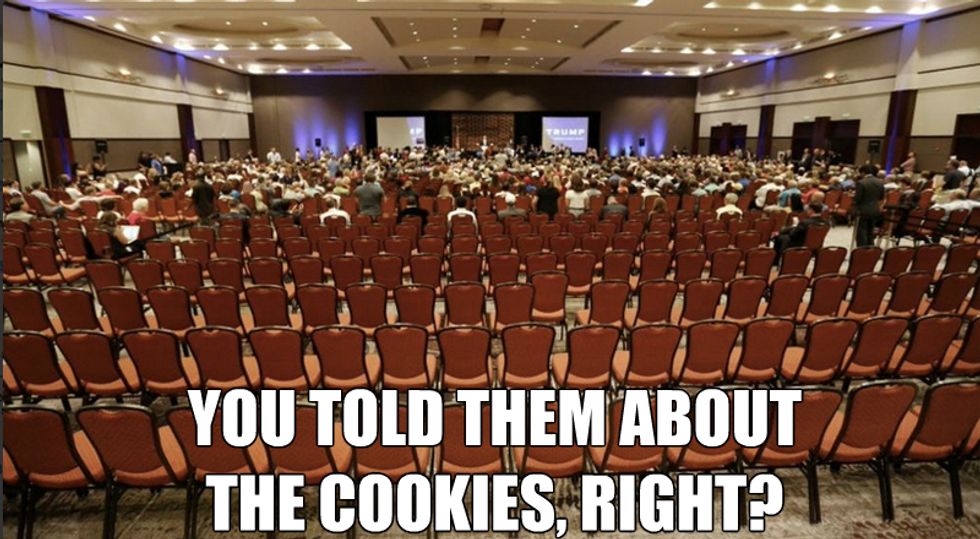 South Carolina, September 2015. Lest We Forget.

Donald Trump, who won the 2016 election by one of the biggest electoral college margins in history (if you count 46th out of 58 elections), is looking forward to also having the biggest inaugural-day turnouts in history Friday, as long as you include the population of the Greater DC metro area as attending the inauguration. You simply can't buy a ball gown anywhere within 150 miles of DC, and there is almost certainly no truth to reports that the Trump Inaugural Committee has resorted to hiring seat-fillers for the inaugural grandstands. Heck, how would you even verify such outrageous gossip? Merely jealous rumors from the chattering classes and fake news sites!

So far, the evidence for hired seat-fillers is awfully thin, consisting of a gossipy twitter claim, a snarky link to a Trump Inaugural website offering free "limited edition, commemorative" tickets (that you don't actually need to have on hand) and little more. We don't doubt there are plenty of people willing to show up and see the Hairy Cheeto take his oaf of office, and we certainly wouldn't want to read too much into this video snippet of Inaugural Chair Tom Barrack offering hospitality to protesters, even -- "If you’re a protester – show up. We’ll give you cookies and Kool-Aid and whatever else you need" -- because maybe they need a crowd of any kind:

Trump Inaugural chair: “If you’re a protester – show up. We’ll give you cookies and Kool-Aid and whatever else you need.” h/t @MatthewFruccipic.twitter.com/erOn7wtWB8

There's plenty of evidence, of course, that Trump paid people to cheer for him at his campaign announcement, and his "press conference" last week had a lot of paid staff in the seats alongside reporters. Given Trump's hatred of any suggestion that he can't fill a room (those chairs up top were only empty because the crowd mobbed him up front, no REALLY!), it's a sure bet that Trump will insist he had ten times as many people at his inaugural as Barack Obama did, even if the real number is more like half Obama's 2008 attendance. (That was a link from noted LIEBERALS "The Blaze," btw.) Trump already has to be muttering obscenities over the fact that three times as many bus parking permits have been requested for the day-after protests than for the inaugural, though maybe that's simply because only low-energy losers take buses. Just compare the private jet parking, OK?

Still, if you're in the bleachers in DC Friday and you notice any inflatable love dolls sitting near you, be sure to send us pics. Especially if they seem to be leaking pee.