Trump Jerk Roger Stone Was Poisoned To Death By The CIA, But He Got Better 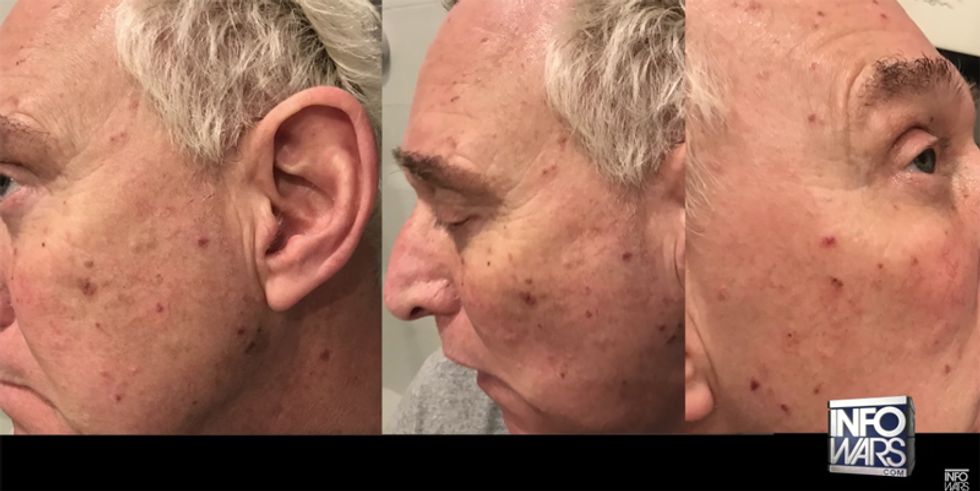 Huge news from the ConspiraLoonoSphere: Alex Jones sycophant, minor Watergate ratfucker, and Donald Trump buddy (though not in an official capacity) Roger Stone revealed in a shocking appearance on Jones's Infowars program that he had very definitely survived a murder attempt by his many enemies, or maybe a bad dose of canned clams. RightWingWatch has the highlights:

Trump's favorite dirty trickster, Roger Stone, will just pop two of these beauties and see you in the morning. If Hillary Clinton doesn't MURDER HIM FIRST.

Stone previously informed us during the campaign that he worried about Hillary Clinton's death squads, but not too much, because he ingests lots of Alex Jones's InfoWars Brand Trucker Speed so he can meet any challenge. But it looks like THEY got to him anyway this time, through nefarious means Stone still hasn't identified. He assured Jones that he's been taking his Trucker Speed on the regular, but nonetheless found himself suffering mysterious symptoms that could only mean one thing: he'd narrowly survived an ASSASSINATION ATTEMPT:

I am generally a healthy person. I have been a runner and a weight lifter. I am very careful in my diet. I’m a user of the Infowars supplements. I have been treated with acupuncture by perhaps the greatest acupuncturist in the state of Florida if not the United States.

So there's a guy who's damn near invincible, what with the trucker speed and the needles. Nonetheless, a few weeks ago he began to suffer symptoms that he thought at first were a “routine stomach virus,” but soon grew much, much worse, with

over 14 days of high fevers, delirium, night sweats; I had lesions on my chest and my face, I had extreme diarrhea, I had vomiting that could not be stopped with medication, I became exceedingly dehydrated, and I ultimately had to be hydrated by IV and saline injections.

Well there you have it: definitely murder, or the symptoms of about a million other things. Jones helpfully pointed out that Stone is such a magnificent physical specimen that "the last time you were in the hospital was when you were born." Aha! Now there's a connection he should have explored further!

But when Stone went to Mt. Sinai Hospital in Palm Beach, his blood tests concerned his physician so much that the hospital sent the tests to the federal Centers for Disease Control, as doctors routinely do. (We'll just note here the CDC can't be trusted when it comes to information on Ebola or Zika, but suddenly became the most credible possible authority for the purpose of this interview.) Wouldn't you know it, the CDC and all the doctors agree Stone was poisoned, probably with

a substance that may have been polonium or had the characteristics of polonium. This made me exceedingly ill. The conjecture of all the doctors was that I did not receive a large enough dose to kill me, but I have never been this ill.

Hold on to your tinfoil hats, kids: Stone didn't happen to bring along his medical records or anything like that, because the important thing is to figure out who would have tried to murder him using Polonius, the busybody old fart from Hamlet. (We bet it was the Danes!) Stone happens to know that, as one of the highest level operatives against the "Deep State," it could be practically anyone!

"Who would want to do this to me? I am an enemy of the deep state. I think people know that I was an insider in American politics I was close to power in nine presidential elections" [...]

“The Republican/Democrat Bush-Clinton deep state has manufactured this Russia fraud. They have compounded it by [pushing] a clearly fabricated document [...]

“Perhaps the fact that I’m effective on behalf of my beliefs has something to do with it,” Stone theorizes.

Stone also theorized the fake news pee hooker document was paid for by Dan Senor, a former advisor to Mitt Romney, the guy who wanted to delegitimize Donald Trump so much that he was begging for a job as Secretary of State. But maybe the poisoning was Romney's revenge for Trump not choosing him! You know how Romney goes around having people murdered. They all do.

Out in mere reality, Polonium 210 is a radioactive isotope used by Russian intelligence agents to murder former FSB agent Alexander Litvinenko in England, although Alex Jones of course knows Litvinenko was actually killed by British intelligence in a false flag attack to make Russia and Vladimir Putin look bad, because that's just how evil the British are. Why, oh, why do U.S. and British intelligence services keep trying to stir up trouble between America and the peace-loving leader of Russia? It is indeed a mystery.