Trump Jr.: Ladies Shouldn't Even BE In Business If They Don't Like Sexual Harassment 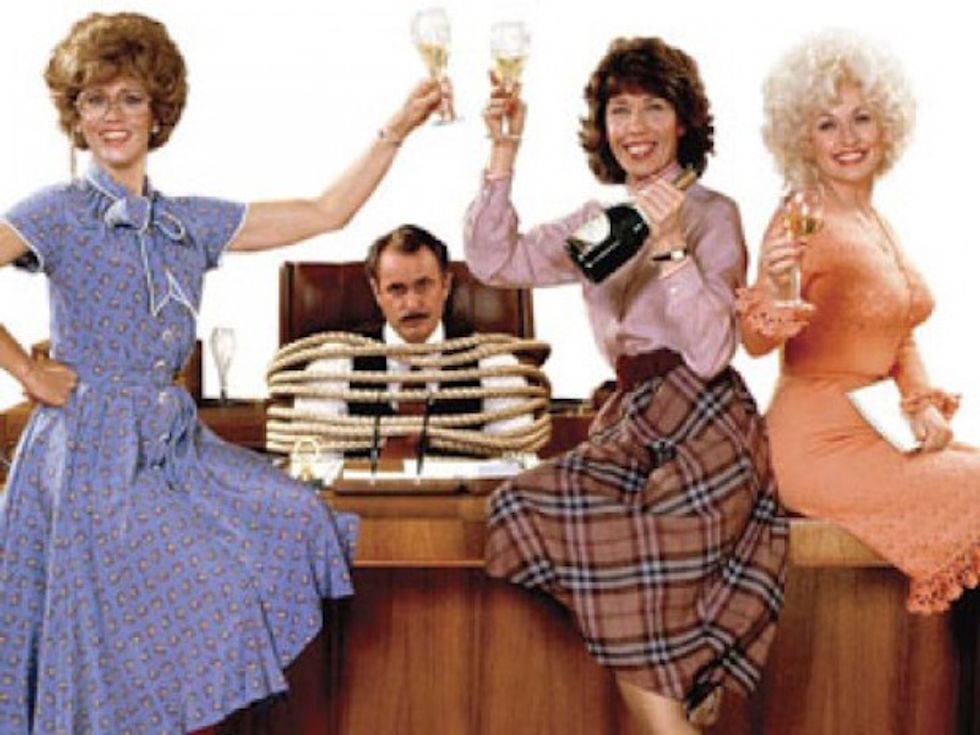 In the year of our lord, 2013, Donald Trump, Jr. had a chat with the fellas of the "Opie and Anthony Show" about whether or not LADIES ought to be allowed on men's golf courses. You know, because they could just period all over those sandy areas and ruin everything, or something.

The recording was discovered by Buzzfeed, and it sure is a doozie. I suggest you listen to the whole thing while repeatedly reminding yourself that this actually took place in a world that exists after the release of 9 to 5 (1980. Go ahead and feel old now).

“If you have a guys’ place you have a guys’ place,” Trump, Jr. said, explaining that he was uncomfortable with women on the golf course and weirded out when he sees one because he is a "guy's guy." The hosts agreed, and did impersonations of women going "that's harassment," in the exact voices that we do, because we all sound like cartoony fishwives all the time.

Trump Jr. then explained that it would be hard for him to tell all of his really great jokes when women were around, because, as everyone knows, we hate jokes and have no sense of humor. Collectively, they all agreed that women were downers who totally ruin their golfing experience.

Trump Jr. then went a step further and explained that he wasn't so hot on women being in business, either, due to their complete lack of interest in being sexually harassed.

Trump Jr. then said, "I’m of that mindset — and I’ll get into trouble, I’m sure — I’ve been on this show enough, I’m sure I’ll get myself in trouble one of these days — but like, if you can’t handle some of the basic stuff that’s become a problem in the workforce today, like you don’t belong in the workforce. Like, you should go maybe teach kindergarten. I think it’s a respectable position."

"You can’t be negotiating billion-dollar deals if you can’t handle, like, you know...” Trump Jr. continued. “But listen — there’s a place where you have to draw the line — but today the stuff you get in trouble for…”

Yeah, if you can't handle Donald Trump Jr. telling you that you have a nice rack, or telling all his really good jokes, you should probably just go teach kindergarten.

Of course, given that this conversation took place in the year 2013, one could just as easily say that if Donald Trump, Jr. cannot handle interacting with a woman without going "OMG BOOBIES," he should maybe not be handling billion-dollar deals either? Like maybe he ought to find a line of business in which he is free to do that without getting his ass sued. Like actually being in kindergarten.

It's fairly doubtful that Trump Jr.'s ideas about women and golf and business did not spring up from absolutely nowhere -- judging by his comments, it seems like he holds the same positions as his father on this.

The fellas then joked that it would be totally HILARIOUS if they brought up pictures of boobs on their computer -- as one does in a work environment -- and then Donald Trump Jr. sued them.

“Wouldn’t it be funny if we showed tits and then Donald sued?” one asked.

“I’d feel harassed!” Trump Jr. joked. “This is my get-rich-quick scheme. I’m now suing you guys because I feel uncomfortable.

“And by the way, that’s what happens in the world. I can play along, I can be fine, and then I can decide randomly — ‘Uh oh, you now have crossed the line, even though I’ve been going with it.’”

Ah yes. Women are always scheming to get sexually harassed by their male colleagues, just so they can sue them for a bunch of money. It is certainly not possible that a woman actually just reaches a breaking point where she no longer feels like smiling and playing along, and decides it's time to put an end to it. It's almost like this is a problem that could be solved, entirely, by not being a weird asshole who tries to show porn to his coworkers? You know, because then people would be comfortable and not sue you? That would really show all the women, probably. He should try that, and so should his dad.