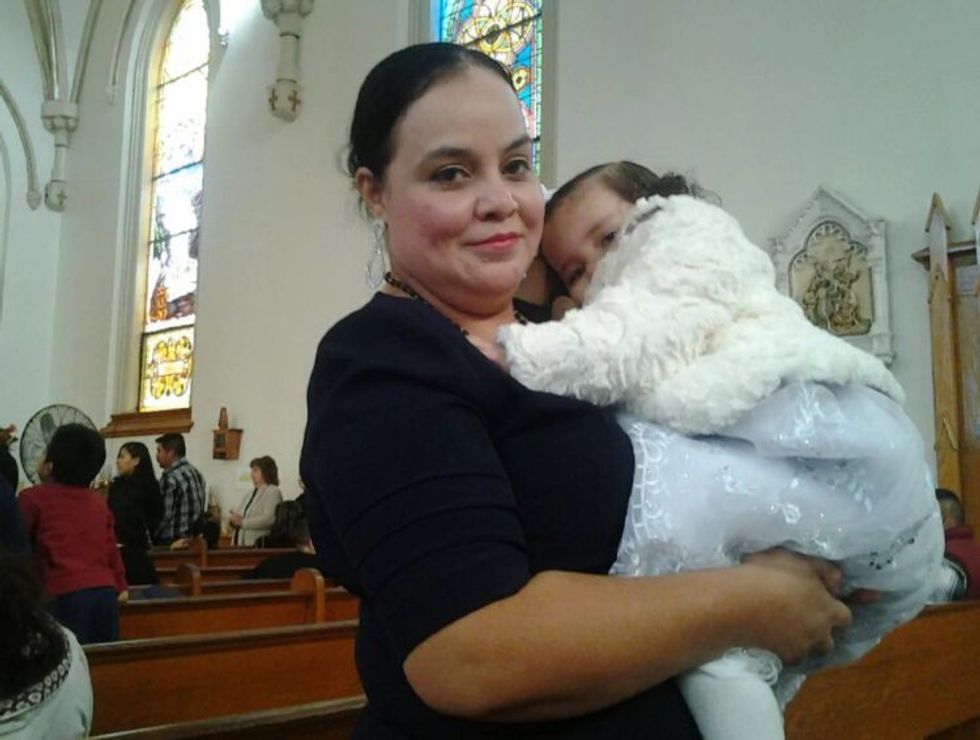 Maribel Trujillo and her daughter. That's a little girl, not an anchor.

In what may be a temporary setback for the New Cruelty, a federal court in Cincinatti has determined that immigration authorities were a bit too eager to deport a mother of four to Mexico, and that they must reconsider her petition to stay in the United States. The decision ordering a review of the woman's case was written by Judge John K. Bush, who was appointed to the federal bench by one Mister President Donald J. Trump.

Maribel Trujillo Diaz was deported to Mexico in April after the Board of Immigration Appeals turned down a motion to re-open her case to stay in the US. Trujillo had argued that her father's 2014 kidnapping by a drug cartel proved that she would face a danger of being harmed or killed if she were sent back, but the appeals board wasn't convinced she'd proven that she faced any specific danger, even though the cartel had specifically mentioned her in threats against her family. Very important note to people fleeing crime: Make sure the gang that says they want to kill your family gets their death threat notarized and includes a photo ID.

Bush's opinion said that the immigration board had “abused its discretion” by rejecting Trujillo's motion. That sounds about right. Trujillo had come to the US in 2002 and was caught in a 2007 raid at a chicken-processing factory where she worked. She applied for asylum because her brother had fled Mexico after being threatened by a gang he'd refused to join. Her asylum request was denied in 2012, and an appeal was denied again in 2014, resulting in a removal order.

Since Trujillo had no criminal record and that liberal squish Barack Obama was president, she was granted permission to stay in the US as long as she checked in annually. In July 2016, she received a work permit that was supposed to be valid for a year, but then President Deport Everyone took office. Although her attorneys filed a motion to reopen her case, based on the kidnapping of her father, ICE scooped her up in April, before that motion was considered. She was deported to Mexico shortly afterwards, not allowed to take any belongings, clothing, or even her passport. Gotta get tough with these dangerous criminal aliens who haven't been convicted of any crimes (yes, yes, deleted commenters, what part of ILL EAGLE don't liberals understand, shut up and fuck you).

Bush wrote that the immigration appeals board should have considered the evidence of "changed circumstance" for Trujillo, and that the board's decision that she hadn't demonstrated she was in danger wasn't supported by the facts:

Her father’s testimony, the judge wrote, “contained concrete, factual assertions as to the familial motivation behind his kidnapping and the threat of harm to Trujillo Diaz.” The case now moves back to the Board of Immigration Appeals.

This doesn't, unfortunately, mean that Trujillo will be allowed back unless the board finds in her favor, but that rebuke from a Trump-appointed federal judge may help focus their deliberations on little things like the specific threats the cartel made against her. Maybe.

Trujillo's deportation became a prime example for opponents of the New Cruelty, including Ohio Governor John Kasich, who told the Cincinatti Enquirer, "we have enough broken families in the country" already without creating more. Catholic dioceses in several states also circulated petitions calling for Congress to intervene on Trujillo's behalf. Congress was a bit too busy passing a huge tax cut, it seems.

Mitch McConnell has blessed us with this dreamboat FOR LIFE! #WINNING

This racist birther freak DEFINITELY deserves a lifetime appointment to the federal bench.

As for Judge Bush, the decision certainly suggests that in some cases at least, he's not a completely irrational loon. Before he was nominated, Bush had posted all sorts of batshit nutso rightwing crap on a pseudonymous blog, suggesting that Planned Parenthood supporter Martin Luther King, were he alive today, would surely despise Roe v. Wade (because abortion is just like slavery) and that allowing gay parents to be listed on passports as "parent 1 and parent 2" was an attack on the American family that somehow means "both parents are subservient to the nanny state." Not surprisingly, he was also freaked out by gay people and flirted with birtherism.

So we'll admit we're a bit surprised that Bush took the immigration appeals board to task as strongly as he did. Could be he's actually trying to apply the law fairly -- or that ICE's behavior in Trujillo's deportation stunk so bad that even Judge John K. Bush smelled the rot.

Now we're just waiting for Donald Trump to tweet about the out-of-control liberal judiciary getting in the way of his deportation machine.

Yr Wonkette is supported by reader donations. Please click here to send us your Ameros!