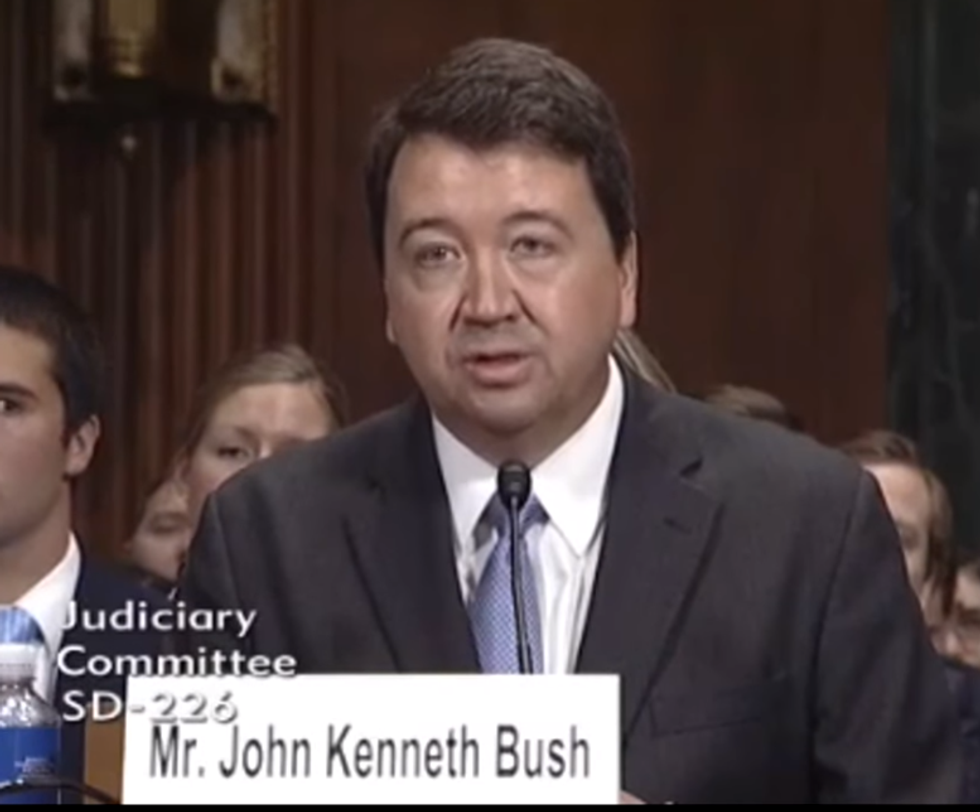 Donald Trump picks the very best people, and that is why his nominee for a seat on the 6th Circuit Court of Appeals,  John K. Bush, was voted out of the Senate Judiciary Committee late last week, and will soon be voted on by the whole entire Senate. Bush is qualified for the position because first of all, he is a lawyer, CASE CLOSED! He can have lifetime appointment now?

No, seriously, Bush is awesome. His wife Bridget helped raise over $14 million to get Senate Majority Leader Mitch McConnell re-elected in 2014, CASE CLOSED, JOHN BUSH IS OBVIOUSLY THE BEST MAN FOR THE JOB. According to libtard activist judges group Alliance For Justice (AFJ), he met with McConnell just after this past November's election, and said, "I would like to be a judge." And lookie lookie, he's been nominated for a sweet position!

He hates gays, he seems hella racist, and he's not keen on women's rights. And as The New Civil Rights Movement blog notes, he wrote MANY WONDERFUL POSTS for his wife Bridget's blog, which is called Elephants In The Bluegrass. He wrote them under a pseudonym, of course, like a common Doktor Zoom.

Let's see just what kind of a champion legal mind we're dealing with. For one thing, AFJ notes that Bush really really really likes WorldNetDaily, a site full of racist, birther, homophobic, easily debunked bullshit. And he has some birther history of his own! Here's a snippet from the AFJ report:

OK, if you can't read that, what it says is that in October of 2008, this dork got freaked out because on two separate days, somebody IN KENYA read his blog. He was really worried it was a member of Barack Obama's Kenyan family, we think! Maybe it was because he was getting TOO CLOSE to the truth about how Obama was born in Kenya and indonesia and Afghanistan and all the other black and Muslim countries. WHOA IF TRUE.

Here's a fun blog post Bush wrote where he said abortion is just like slavery, and that moreover, Dred Scott and Roe v. Wade are just the same and equally awful. To make his argument, he relies on Alveda King, the member of Dr. King's family that Dr. King's family doesn't really like to talk about, because she makes literally everything about abortion. Here's another blog post where he was GRRRR MAD that Hillary Clinton, as secretary of State, changed passport applications to list "Parent 1" and "Parent 2," as opposed to mother and father, because that means the nanny state is deciding which parent is more important, and also too gays are bad. In a paper he co-authored for the Federalist Society, he complained that the Kentucky Supreme Court had "immunized consensual sodomy from criminal prosecution," because OH THE HORRORS!

Also he doesn't like the Supreme Court's decision in New York Times v. Sullivan, a case that "established protections for journalists against certain libel claims." Oh now we see why Trump likes him!

Oh, and one time he gave a speech to a private club, the Forum Club of Louisville, and thought it would be cool to quote Hunter S. Thompson, from The Kentucky Derby Is Decadent and Depraved:

“I come here every year, and let me tell you one thing I’ve learned—this is no town to be giving people the impression you’re some kind of faggot.”

Now look, he may have had a very LITERARY and SMARTYPANTS reason for saying that quote. Or maybe he just likes it because it has the "faggot" word in it. Dunno!

(For the record, we have it on good authority that Louisville is a perfectly fine town in which to be some kind of faggot. Lexington too. The rest of the state ... not so much.)

During Bush's hearing before the Senate Judiciary Committee, Al Franken (who else?) gave him a whole ton of shit. We'd transcribe it for you, but 1) Don't wanna and 2) all you need to know is that Franken's line of questioning could be accurately titled, "What Kind Of Fucking Moron Thinks WorldNetDaily Is A News Website, Are You Fucking Kidding Me, And You Want To Be A Federal Judge, Oh God Oh God Oh God." Enjoy!

Bush did allow that, if he had it to do all over again, he might not have written some of those bloggity posts, but you know, coulda woulda shoulda.

(Oh my stars, how rude of Wonkette to say! Sorry not sorry.)