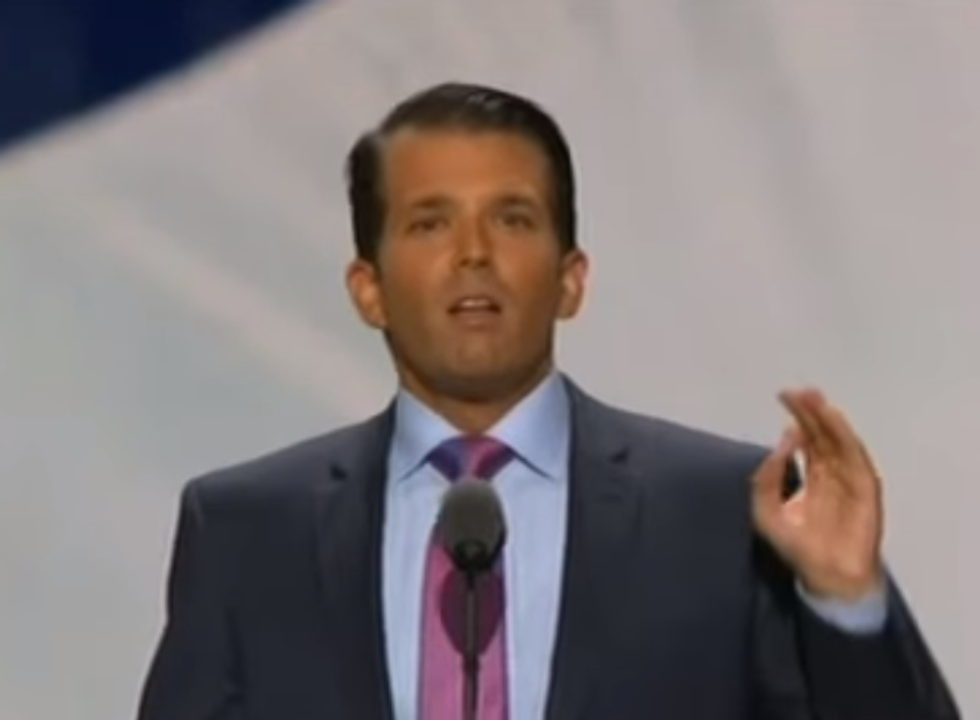 somethin' wrong with that boy

Shoes droppin' every two hours yo! If you somehow have not heard the big story of the day, it is that there was a SIXTH person in the room when Donald Trump Jr., Paul Manafort, and Jared Kushner met at Trump Tower in June of 2016 with a Russian government lawyer -- hey that's how the weird gross British music publicist who set up the meeting with Junior described her, why would he lie? He also told Junior the meeting was part of the Russian government's efforts to help swing the election for his dad -- and her interpreter. The sixth person? Was a Russian spy! Or a guy who used to be a Russian spy! NO BIG DEAL, who among all the people at Trump Tower at any given time is NOT a Russian spy?

The alleged former Soviet intelligence officer who attended the now-infamous meeting with Donald Trump Jr. and other top campaign officials last June was previously accused in federal and state courts of orchestrating an international hacking conspiracy. [...]

In court papers filed with New York Supreme Court in November 2015, Akhmetshin was described as “a former Soviet military counterintelligence officer” by lawyers for International Mineral Resources (IMR), a Russian mining company who alleged that they had been hacked.

Those documents accuse Akhmetshin of hacking into two computer systems and stolen sensitive and confidential materials as part of an alleged black ops smear campaign against IMR. The allegations were later withdrawn.

The U.S. District Court in Washington, D.C. was told in July 2015 that Akhmetshin had arranged the hacking of a mining company’s private records—stealing internal documents and then disseminating them. The corporate espionage case was brought by IMR, who alleged that Akhmetshin was hired by Russian oligarch Andrey Melinchenko, an industrialist worth around $12 billion.

Among the accusations? That dude paid hackers to do the deed. (What? This has nothing to do with how the Steele Dossier alleges the Trump campaign may have paid Russian hackers to fuck with the American election.) Also too, dude reportedly bragged about doing the hacking.

We were just spitballing and having hunches this morning when we asked if Russian spy dude was part of the Russian Spy Best Buy Geek Squad, and if he attended for reasons related to that weird Trump Organization server that mostly communicated with Alfa Bank in Moscow, for "reasons." (When it wasn't doing that, it communicated with Spectrum Health, owned by Betsy DeVos's baby daddy Dick DeVos, for "reasons.") If you look at the original Slate investigation on those servers (which came out just before the election), you'll note that it wasn't long after this June 9 meeting that pings between those servers started to go BOOBIES OUT CRAZY. Wonder if these things are related!

Anyway, we'll see you (with an even shorter post) when the next shoe drops on this, which will be two hours from now. If you're interested in how moron Republicans are going to fight back against this, read some horseshit from Erick Erickson at the Resurgent, who we guess has taken a break from goat-fucking to write a thing about how Junior's Russian meeting was a SET-UP by the DEMONCRATS and FUSION GPS, which made the FAKE NEWS PEE HOOKER DOSSIER, because FUSION GPS is a DEMON-CRATIC COMPANY even though it TOTALLY ISN'T and Erickson's entire argument is TOTAL BULLSHIT because he's a FUCKING MORON, but you should KNOW ABOUT IT because GOP Senator Chuck Grassley, chair of the Senate Judiciary Committee, is ALSO A FUCKING MORON, and it's pretty clear he's adopting the same SHOOT THE MESSENGER STRATEGY and trying to pin this on the DEMONCRATS and FUSION GPS.

(Seriously, read it, you need to know about it.)

Anyway, see you in two hours!