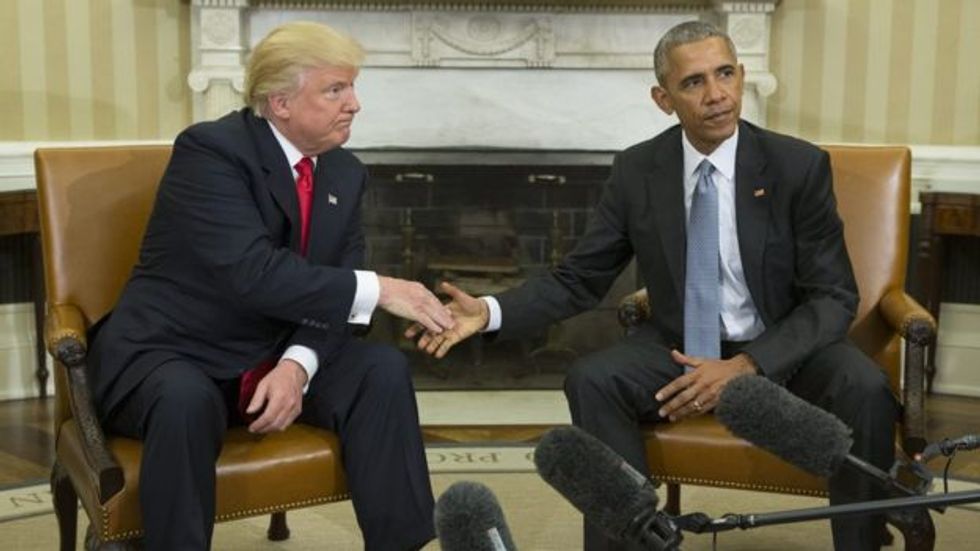 This morning we learned, because our President Donald Trump was being a big shitty spitty spiteful baby man, for a change, and just could not stop his fat twitter fingers, that our Forever President, Barack Obama, had warned Trump when they met after the election that he should not hire Mike Flynn.

For an extremely abbreviated timeline,

Mike Flynn continued to be an actual literal foreign agent but didn't tell nobody but Elijah Cummings knew, and we knew, and everyone knew, but Trump acted like he didn't know.

Sally Yates went to the White House and was like "HEADS UP, YUH HUH."

It somehow "got into the newspapers."

Since Yates is scheduled to testify today at 2:30 Eastern (and yes, we will be liveblogging), Donald Trump went on the twitter to say it was Barack Obama's fault Flynn got security clearance in the first place! How come nobody is blaming Obama, HENGH? Hell, if they could blame him for George Bush's response to Hurricane Katrina, surely they could blame him for Flynn, whom he had hired in the first place! (And whom he'd then fired, for being a crazy dick.) Not so fast, said Barack Obama (okay, three Obama officials) who then called NBC News to rat out Trump for being a stupid idiot who lies.

Now Trump's people have confirmed the exchange, but -- and you will like this -- they say they thought he was joking.

A senior Trump administration official acknowledged Monday that Obama raised the issue of Flynn, saying the former president made clear he was "not a fan of Michael Flynn." Another official said Obama's remark seemed like it was made in jest.

Let's bring that picture down from the top!

Look at that hilarious jokester!

Uh huh. We have no jokes for you here, because Barack Obama broke comedy.

Wonkette is ad-free and supported only by readers like you. Go get your wallet. We'll wait.