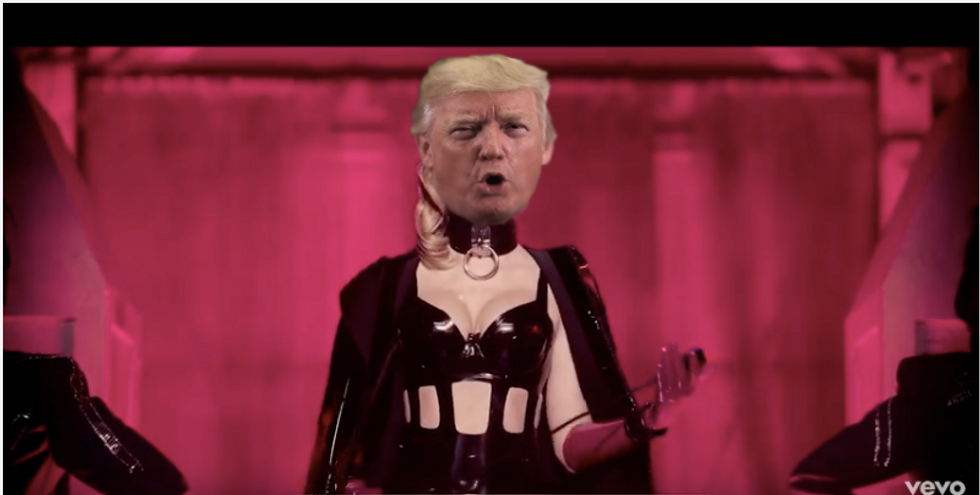 This morning, among other ridiculous things (so hard to choose sometimes!, Donald J. Trump sent out a tweet demanding that people put pressure on Democrats to end the law that separates children from their parents at the border. You know, the law that has resulted in ICE losing about 1500 children, many of whom have likely ended up in the hands of human traffickers -- as Wonkette told you in April.

Put pressure on the Democrats to end the horrible law that separates children from there parents once they cross the Border into the U.S. Catch and Release, Lottery and Chain must also go with it and we MUST continue building the WALL! DEMOCRATS ARE PROTECTING MS-13 THUGS.

This is, of course, rather confusing as this "horrible law" is his administration's own doing.

Here is John Kelly talking about the law and explaining why it's a great idea, in an interview with NPR

Even though people say that's cruel and heartless to take a mother away from her children?

I wouldn't put it quite that way. The children will be taken care of — put into foster care or whatever. But the big point is they elected to come illegally into the United States and this is a technique that no one hopes will be used extensively or for very long.

"Foster care or whatever." And yes, as it turns out, "or whatever" happened to about 1500 children that the US government can't find.

Now that #WhereAreTheChildren has blown up the internet and people are rightfully demanding to know what the hell happened to those kids, Trump is in a bind!

But, rather than admit that maybe this was not the best idea ever, and decide to end it himself, he has decided to go full Taylor Swift and say "Look what you made me do!" to Democrats. Problem solved!

We can assume that Trump is likely aware that this is not a policy favored by Democrats, but that he is trying to place the blame for its horrible outcome on them anyway, because they wouldn't give him what he wants. He is, for all intents and purposes, doing the political equivalent holding a gun to a child's head and saying "If you do not give in to my demands, it will be YOUR FAULT if I pull the trigger and murder this child. Tee hee!"

While "give me the money or the kid gets it" is a scenario we have seen in many a procedural or hostage movie, it's fairly unusual for it to happen in politics.

This tactic of hostage-taking has, however, been a hallmark of Trump's presidency. He did it with DACA, and now he's doing it again. He is all but admitting that his policies are awful and cruel, and that the only way to stop him is by letting him do other things that are also awful and cruel.