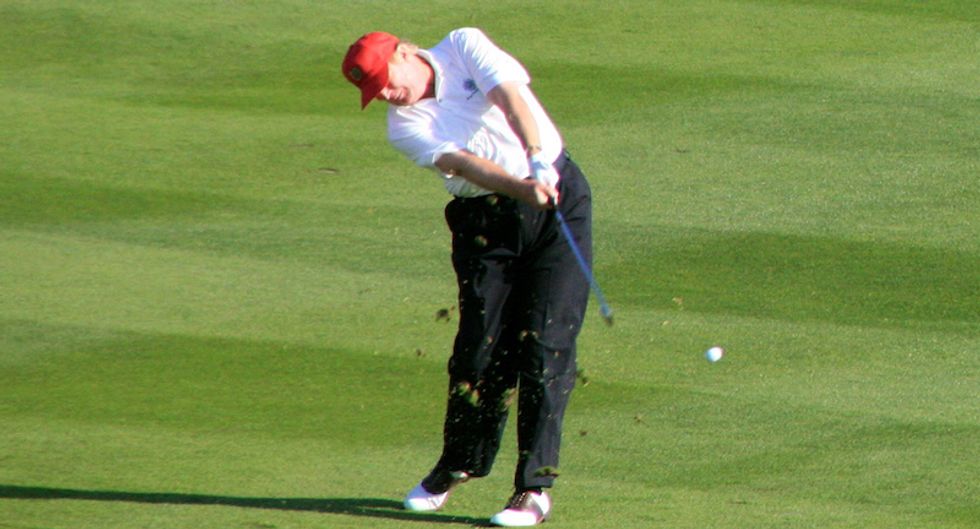 A really fun thing about the future we all now live in is that one can run a fever for two days, avoid all the news and spend the whole time watching Criminal Minds, only to return to a world that is definitely weirder than a fever dream and somehow more disturbing than Arye Gross guest starring as a serial killer who tries to turn women into pet birds.

"Oh boy!" I thought, when the first thing I saw upon looking at Twitter was that "Trump Lashes Out" was trending. "Who or what is he lashing out at now? Is it more sportsball players? Is it a random celebrity? Is it his own shadow? What could it be?"

I guess it is a good thing I did not place any money on my guesses, because I probably would not have guessed that the person he was "lashing out at" was Carmen Yulín Cruz, the mayor of San Juan, Puerto Rico. Why? Because she hurt his feelings by being "nasty" to him and criticizing the administration's response to Hurricane Maria -- suggesting that she, and indeed the entire island, hadn't done enough to help themselves and want everything done for them. Oh yes, those greedy, greedy hurricane victims. Always thinking of themselves before Donald Trump's feelings! UNFAIR!

Trump -- who does not handle criticism from women or people of color very well at all -- did this from the comfort of his New Jersey golf resort, while referring to himself in the third person.

Then, he yelled at the press for being mean to him. Because this tragic natural disaster is all about him and his feelings.

Meanwhile, Mayor Cruz has been doing this:

What, exactly, did Mayor Cruz say to earn Trump's ire? As it turns out, she was a tad miffed about acting secretary of Homeland Security Elaine Duke's statement that this was “really a good news story in terms of our ability to reach people and the limited number of deaths,” and the Trump administration's attempts to pretend as though relief efforts were going well, when in fact they were not.

In an interview on CNN, Mayor Cruz said:

Then, in a press conference on Friday, Mayor Cruz said that if her people do not get the food and water they need, "what we we are going to see is something close to a genocide."

“We are dying here. And I cannot fathom the thought that the greatest nation in the world cannot figure out the logistics for a small island of 100 miles by 35 miles. So, mayday, we are in trouble.[...]

“I will do what I never thought I was going to do: I am begging. I am begging anyone that can hear us to save us from dying. If anybody out there is listening to us, we are dying. And you are killing us with the inefficiency and bureaucracy.[...]"

This has not been handled well. In fact, it has been handled terribly. His administration took five days to even respond. They took a week to waive the Jones Act, so that foreign governments could bring aid to the island. When Trump did meet with Homeland Security at his New Jersey golf course, they didn't talk about how to help Puerto Rico, but rather about his new and exciting travel ban. Army Lt. Gen. Jeff Buchanan, who is in charge of relief, has said that they do not have enough troops and equipment down there.

And yet, as Senator Chris Murphy points out...

That is very much worth asking! I am curious myself. What is that money even going towards, if not keeping our citizens safe? I am also curious as to why our president spent most of this week yelling at football players when all of this was going on, and why he is now sitting at his golf resort yelling at the Mayor of San Juan and the press on Twitter, because that seems like an awfully callous and ridiculous thing to be doing.