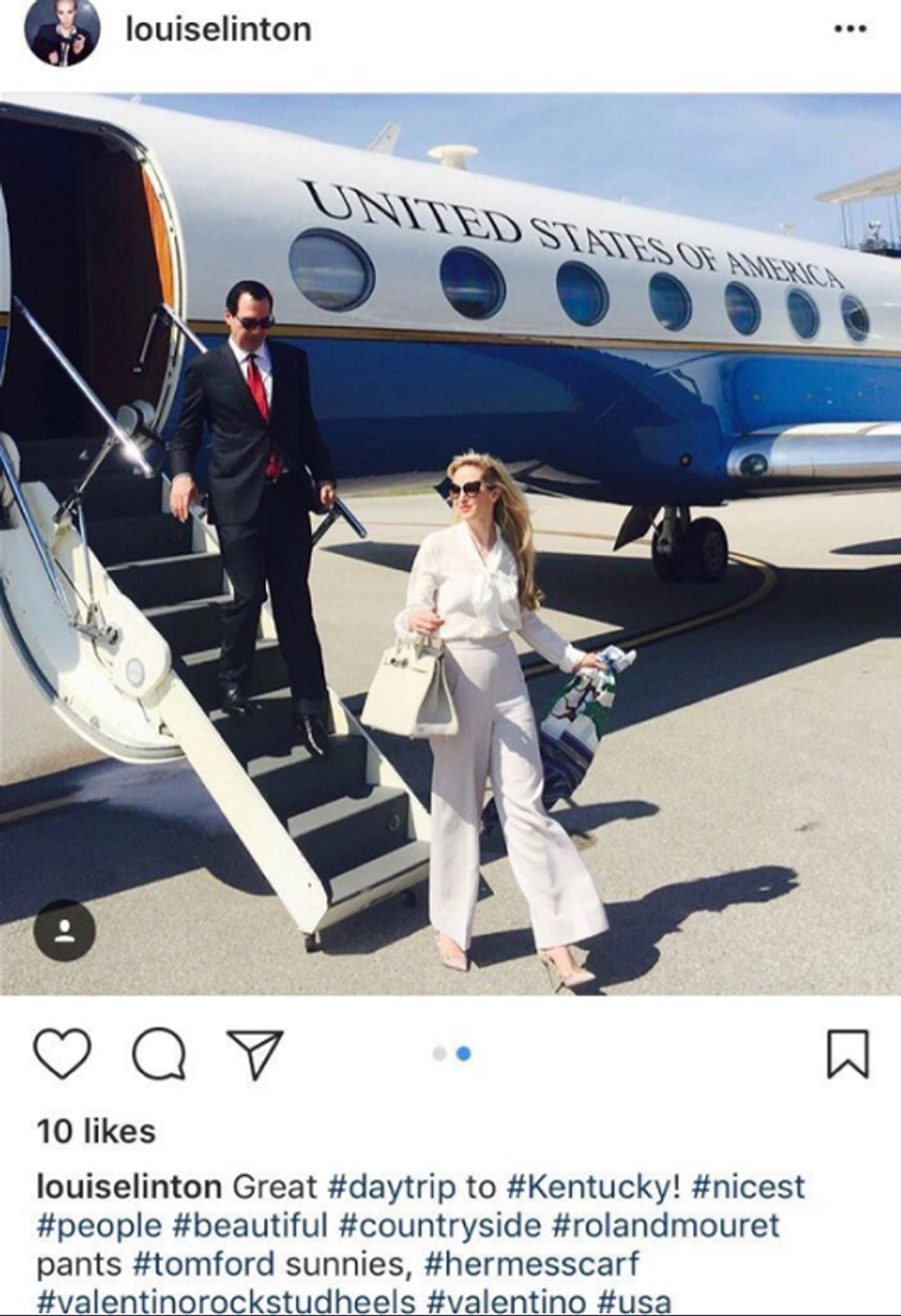 Treasury Secretary Steven Mnuchin and Louise Linton got married 59 days ago. Look, a picture of their glamorous wedding! The happy couple is flanked by Donald andMelon Trump, and Mike and Mother Pence.

As Vanity Fair notes, it was a very fancy schmancy affair. Mnuchin, after all, is a Goldman Sachs/Hollywood creature from the very swamp Trump promised to drain, which means he's gotta lotta dolla dolla bills, y'all.

Linton posted an Instagram pic of herself hopping off a US American government plane, and made sure to #hashtag all the brands she was wearing because otherwise we would have assumed she got it all at Kohl's:

Unsurprisingly, a woman on the internet saw this and was like "I see you, Marie Antoinette," so she replied, "Glad we could pay for your little getaway. #deplorable." This did not sit well with the Duchess of Mnuchin! Here is your screenshot, since Linton has now made her InstaFace private:

cute! EMOJI Aw!!! Did you think this was a personal trip?! Adorable! Do you think the US govt paid for our honeymoon or personal travel?! Lololol. Have you given more to the economy than me and my husband? Either as an individual earner in taxes OR in self sacrifice to your country? I'm pretty sure we paid more taxes toward our day "trip" than you did. Pretty sure the amount we sacrifice per year is a lot more than you'd be willing to sacrifice if the choice was yours. EMOJI EMOJI

We must cut in and remind everyone that they got married FIFTY-NINE DAYS AGO. She must have done a metric fuckton of self-sacrificing herself for America in the LITERAL WEEKS she has been married to the fugly-ass Treasury secretary. She probably wears Old Navy on Fridays, to show everybody she's jes' folks. Whether she leaves the house in such pauper threads, we do not know. Maybe she just throws them on to sit at the kitchen counter in her 16,000 square foot, $12.6 million Massachusetts Avenue Heights mansion and do her weekly coupon-clipping, because she's such a normal, in-touch American. Dialing Melania on her flip-phone, she may even be known to exclaim, "Girl there is a SALE at the Big Lots, and then it is UNLIMITED BREADSTICKS-THIRTY at the Olive Garden. You in?!?! Lolol EMOJI."

You're adorably out of touch.

She also said the poster's peasant life looked "cute." And the choir replied, "CHRIST, what an asshole!"

As HuffPost's Yashar Ali points out, Linton has acted like a foolish dickhead before, even before her many weeks of devotion to Steven Mnuchin, Donald Trump, and Making America Great Again:

In 2016, Linton came under fire for her self-published memoir, In Congo’s Shadow, which detailed her time as a student in Zambia. In July of 2016, Zambians, and their advocates, criticized Linton’s portrayal of Zambia as a war-torn, poverty-stricken nation with wild animals running through the streets. Linton was also criticized for portraying herself as a white savior. Under pressure, Linton withdrew the book from sale and pledged to give any proceeds to charity.

Surprised she didn't just send a mean girl Instagram message to Zambians asking if they even know how totally ruined her #ToryBurch sandals were after her excursion to the country. How ungrateful! She could have used the hashtag #AllCoutureMatters.

Wonkette salaries are fully funded by lovely folks like you! If you love us, click below to fund us!