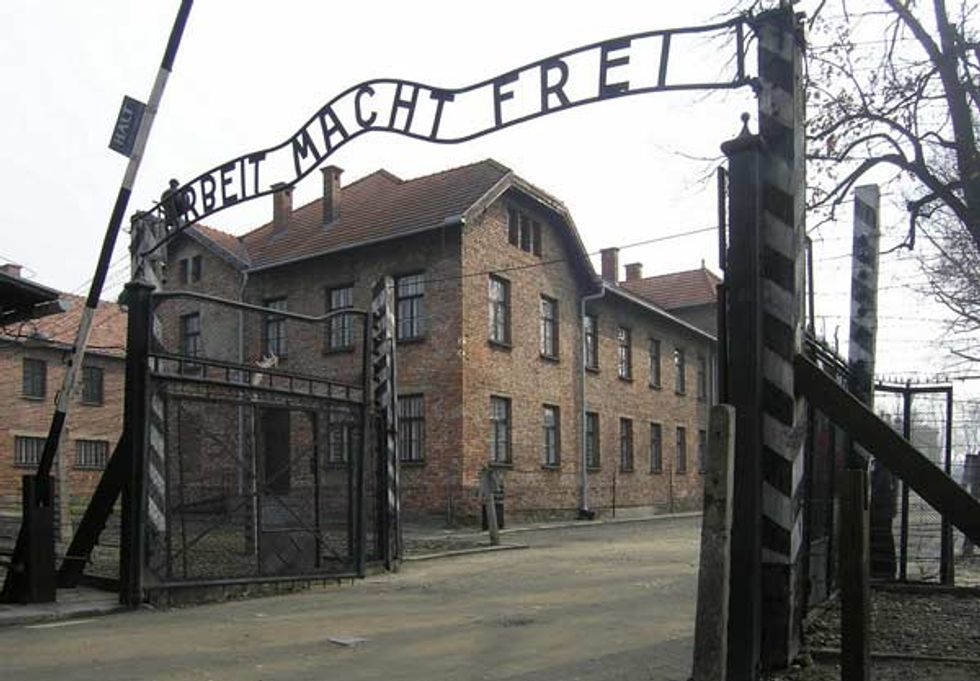 We have now entered Phase Three of the Mike Huckabee Uses A Shitty Holocaust Analogy story. Phase One was when he said the dumb thing about how Obama's nuclear deal with Iran will "take the Israelis and march them to the door of the oven.” Phase Two was Barack Obama saying that Huck's comment would be "considered ridiculous if it weren’t so sad" and maybe merely an attempt to be more outrageous than Donald Goddamn Trump, followed by Huck's angry reply that Obama is totally gonna gas the Jews, and here's a meme to prove it.

And now the next inevitable step: asking all the Republican 2016 candidates to agree with or condemn Huckabee's remarks, which is just getting underway but should eat up much of the remainder of Monday and part of Tuesday, unless of course there's another mass shooting to distract us (50-50 chances). So far, a Trump adviser thinks Huck is absolutely right, while Scott Walker didn't quite condemn the remarks. Hurrah, just 14 more of these morons to go.

ON CNN, Trump's campaign manager, Michael Cohen -- whose very employment is a testament to Donald Trump's great love for the Jewish people and they love him too, it's so beautiful, nobody has Jewish support like Donald Trump, never mind that overrated hack Jonathan Liebowitz -- told Chris Cuomo that Donald Trump certainly thinks Huckabee is right:

“Does Donald Trump think it was wrong and offensive?” Cuomo asked, about the governor’s choice of metaphor.

“I don’t think so,” Cohen replied. “I think what he’s really trying to say here is that we’re really in a bad place.”

“He’s okay with these words?” said Cuomo. “‘March Israelis to the door of the oven?'”

“Because we’ve been there,” Cohen said. “My father was a Holocaust survivor and I can tell you, there’s that old statement, ‘Never again.’ What Trump is trying to say is that a nuclear Iran is the destruction of this world.”

Cohen may also have added that if only the Jews of Poland and Czechoslovakia had had a Donald Trump to lead them while wearing a classy baseball cap printed with Make America Great Again, the Mexicans never would have put them in the gas chambers, either.

In an interview on public radio, Scott Walker distanced himself a teensy bit from Huckabee's exact phrasing, but carefully backed away from actually saying it was a bad thing:

“Well, as I said about Mr. Trump, I’m not gonna comment on him, or Governor Huckabee, or anybody else in terms of their policies,” Walker said. “I’m gonna let them speak for themselves. I’ll tell you what I’m for and what I think needs to happen. I believe firmly—.”

Asked by the host to directly condemn the remarks, Walker said it was not something he would say.

“Well, I’m certainly not gonna say it, but I’m telling you, they can speak for themselves. I’m gonna tell you what I’m for and you’re not hearing me use that sort of language. What I’m talking about are the issues and the specifics.”

You see, with Scott Walker and the Jews, it's complicated. He loves the Jews so very much, and especially the prospect of getting him some Sheldon Adelson money, which is why, as a token of his respect, he explained at AdelPalooza 2014 that he named his son "Matthew," which he pointed out pointedly is Hebrewic for "gift from God," and that he always lights a "menorah candle" with his Jesus tree. Then again, he doesn't always get it right, like wishing his Hebraic Friends a Happy Jew Christmas with a cheery "Molotov!" So you can see why he'd be careful, just like how he doesn't want to talk about how people catch the gay or whether science is real. Because none of those questions are about Ronald Reagan. Could you please ask him a question about Ronald Reagan please?

We haven't yet seen any other of the 2016 Republican litter comment on Huckabee's comment, although it does seem to have ruffled the feathers of quite a few Actual Jews, like DNC Chair Rep. Debbie Wasserman Schultz ("Cavalier analogies to the Holocaust are unacceptable"); the National Jewish Democratic Council ("This was not a random, off-the-cuff remark, and the Jewish community deserves better than to hear a false apology" -- which they won't even get); and the ADL's national director, Jonathan Greenblatt ("To hear Mr. Huckabee invoke the Holocaust when America is Israel’s greatest ally and when Israel is a strong nation capable of defending itself is disheartening"). Barak Ravid, of the Israeli newspaper Haaretz,tweeted that Huckabee was "crazy" and his comments "disgusting."

But let's not make too much of those people -- they aren't the Jews Huckabee was talking to anyway. The Jews Huckabee is most concerned with are the purely notional ones that Christian fundamentalists think are absolutely necessary to the Second Coming, at least the third of them who'll accept Christ as King, while the rest go to hell. But Israel has to be protected until then, because prophecy, you know.

Also, just as we were going to WordPress, we learned that former New York Gov. George Pataki, who actually is a GOP candidate, mildly condemned Huckabee's remarks, tweeting that he agreed with Obama that the "remarks are 'sad,' unfortunately, it comes from the most divisive President in history #OneAmerica." So that oughta be just the firm rebuke that turns Huckabee right around. Once you've lost George Pataki, you've lost George Pataki.