Trump Was Trying To Get Out Of Pence Pick At Midnight Last Night, Because He Is A Fickle Dick 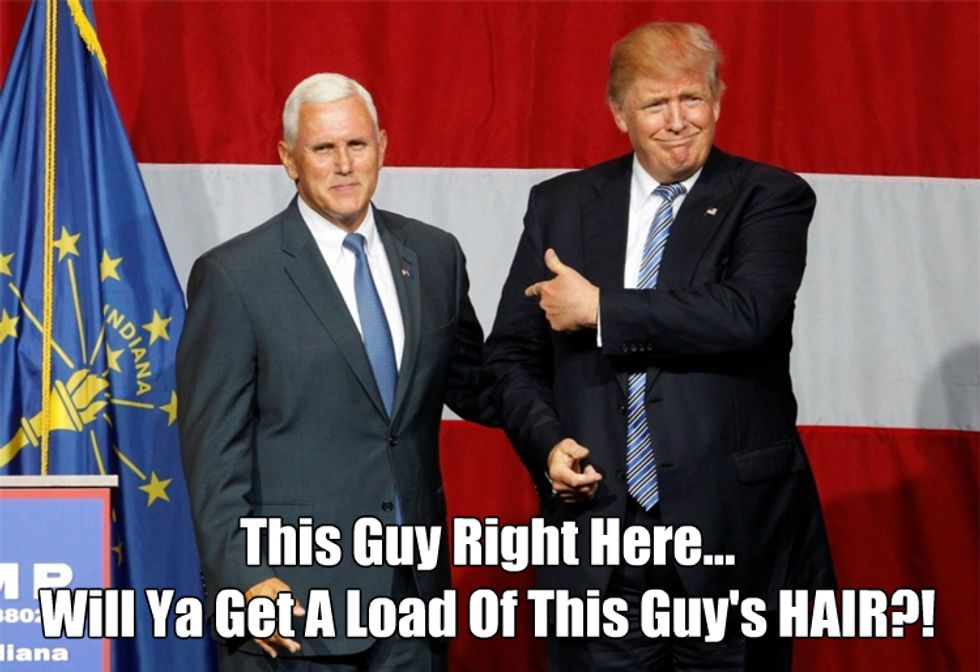 It's not often that we at Wonkette are wrong just kidding, it is very often. But the last time we thought we were wrong, we were mistaken.

Your editrix (me!) is very bad at political prognostication. This is for two reasons: she (I) am a bit of a conspiracy theorist, and she (I) really, really likes a longshot. Give her two 30-to-1 horses in the same race and she will exacta them and then swim in her winnings of golden doubloons.

It's going to work, some day.

But this morning, when Donald Trump announced -- without fanfare, on Twitter -- that yes, the New York Times was right and he was picking Indiana Governor Mike Pence, your editrix thought for over an hour that she'd been wrong when she touted her alternate candidate, Newtvanka Palingrich.

Until now. Now CNN and NBC are confirming with their reporterly "sources" (Donald Trump in a fake mustache) that Trump was up till midnight last night, calling around to ask if it was still possible to unpick Pence. With Pence having already been offered and accepted the vice presidential nomination. Was he responding to the universal panning of Pence? Was he responding to Pence's dull oafishness, a very low energy guy? Was he just mad that Penn & Teller had blown the surprise of his teevee magic trick? Who the fuck knows, it is Donald Trump.

Twitter thinks yesterday's leaks that it was Pence -- forcing Trump's hand -- came from Pence folk or Paul Manafort. They are almost certainly correct. Twitter thinks today's leaks, badmouthing Pence, came from Trump himself, and they too are almost certainly right. That dude wouldn't realize such a leak was exposing himself as a fickle, weak, mercurial dick who shouldn't be within a kilometer of the nuclear football, because he's really very dumb. As long as he is pounding Pence in the ass, it's all that matters.

Let's outsource a summary to some smart guy, this guy, Matt Fuller, whatever:

1. Before reaching a final decision, leak the decision to outlets that offer you nothing.

7. Deny to them that you've reached a final decision.

8. Fly your VP selection to you.

10. Ask aides if you can change your mind.

12. Don't have anything ready.

15. Have aides leak to CNN that you asked if you could back out of VP decision last night.

No wonder Twitchy does it this way; that was easy!

We would also like to take this opportunity to remind you that Trump intends to leave the presidenting to his veep:

The vice presidential pick will also be part of the process of proving he’s ready for the White House, [Paul] Manafort said. “He needs an experienced person to do the part of the job he doesn’t want to do. He seems himself more as the chairman of the board, than even the CEO, let alone the COO.”

In conclusion, your Wonkette regrets the error of having thought we were wrong. We won't make that mistake again.