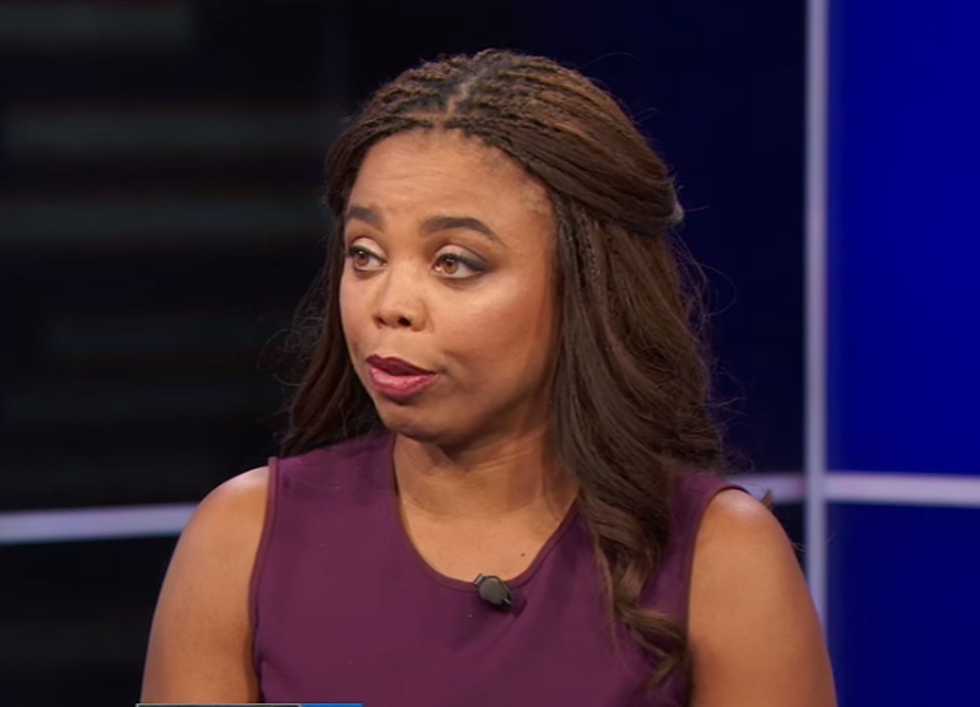 Jemele Hill, who seems cool as shit to us!

White House Press Secretary Sarah Huckabee Sanders made an ass of herself on Wednesday, because it was a day. Reporter David Nakamura asked her about comments from Jemele Hill, of ESPN's "Sportscenter." Hill is black, and had the audacity to call Donald Trump a white supremacist on her Twitter. That's not all she said either. She dropped some rapid-fire truth in tweets that are now deleted:

In her tweets, Hill wrote that “Trump is the most ignorant, offensive president of my lifetime.” She said his “rise is a direct result of white supremacy. Period,” and that he is “unqualified and unfit to be president. He is not a leader. And if he were not white, he never would have been elected.”

Wonkette can co-sign all of that.

Let's go to the tape of Sarah Huckabee Sanders, who was obviously trying to live up to the old expression, "When fascism comes to America, it probably just ate some Arkansas fried squirrel its daddy Mike Huckabee put in its lunchbox that day":

I’m not sure [Trump is aware of the comements] but I think that’s one of the more outrageous comments that anyone could make and certainly something that I think is a fireable offense by ESPN.

Excuse us, a "FIREABLE OFFENSE"?????? Now the White House is telling companies to fire people for criticizing Dear Leader? How the fuck is that not fascism? At the risk of stating the obvious, GO FUCK YOURSELF, SARAH HUCKABEE SANDERS.

The press secretary added that Donald Trump has a black friend, because he met with black Republican senator Tim Scott THAT VERY DAY. How can he possibly be racist? Indeed, just after this exchange, the White House sent out a picture of Trump with his black friend:

In the statement that accompanied the picture, the White House referred to Tim Scott as "Tom Scott," but BLAH DETAILS.

On top of having a black friend, did Donald Trump not, after much poking and prodding, finally spit out words about the Charlottesville Nazis being bad? WELL DIDN'T HE? Sarah Huckabee Sanders would like to remind you that he did.

Another thing that happened this week that exhibited the president's vast capacity for racial transcendence was this:

Oops, that is the opposite of racial transcendence. Our bad. (To be entirely fair, Sarah Huckabee Sanders did say Wednesday that Trump would sign it. It's the very least he can do. Literally.)

Of course, there has been much reprimanding and apologizing, even without the sounds that came out of the press secretary's foul wordhole. On Tuesday, ESPN "scolded" Hill and made sure everybody knows it's not about to let some black lady speaking her mind rock the boat:

See? They had a nice talk and ESPN said "tut tut!" and everything's fine now! She's not getting fired or anything, like the White House so kindly requested.

For her part, Hill apologized on Twitter, for saying something that's obviously true:

After that, ESPN sent out a new missive, just to clarify even more that it is fine for Jemele Hill to have beliefs and thoughts, as long as she doesn't have them in ESPN's name:

"Jemele has a right to her personal opinions, but not to publicly share them on a platform that implies that she was in any way speaking on behalf of ESPN. She has acknowledged that her tweets crossed that line and has apologized for doing so. We accept her apology."

While Hill is getting a lot of support, from curiously-still-unsigned football player Colin Kaepernick and the National Association of Black Journalists and many others, this is just yet another example of how wingnut conservatives really would like people to keep their goddamn politics out of sports or any of the rest of the public sphere, unless they're wingnut conservative politics. CNN notes that Tucker Carlson (whose white hood is peeking out more and more these days!) has been bitching all week, and Sean Hannity has devoted time to figuring out who the real racists in sports are:

Thanks for your great work, Sean Hannity, as always.

Before Huckabee Sanders’s comments, several conservative media outlets, including the Federalist, the Daily Caller and Breitbart, wrote strongly worded articles chastising both Hill and ESPN, which some claim would’ve fired her already if she were conservative and said such a thing about a liberal politician.

Unfair! The mean black lady hurted their feelings and didn't even get fired!

While that is all surely obnoxious, it's nothing new, and it's a fight that will happen every time a sports figure or commentator points out that racism exists or black lives matter or Donald Trump is a fucking bigot.

But holy shit, Sarah Huckabee Sanders. The press secretary needs to explain herself thoroughly the next time she steps up to that podium, by which we mean APOLOGIZE PROFUSELY FOR SAYING THAT FASCIST SHIT AND WALK IT BACK ENTIRELY.

Otherwise we will just assume President White Supremacist signed off on her comments.