Trump Will Save America From The Scourge Of Male Nurses, Says Moron 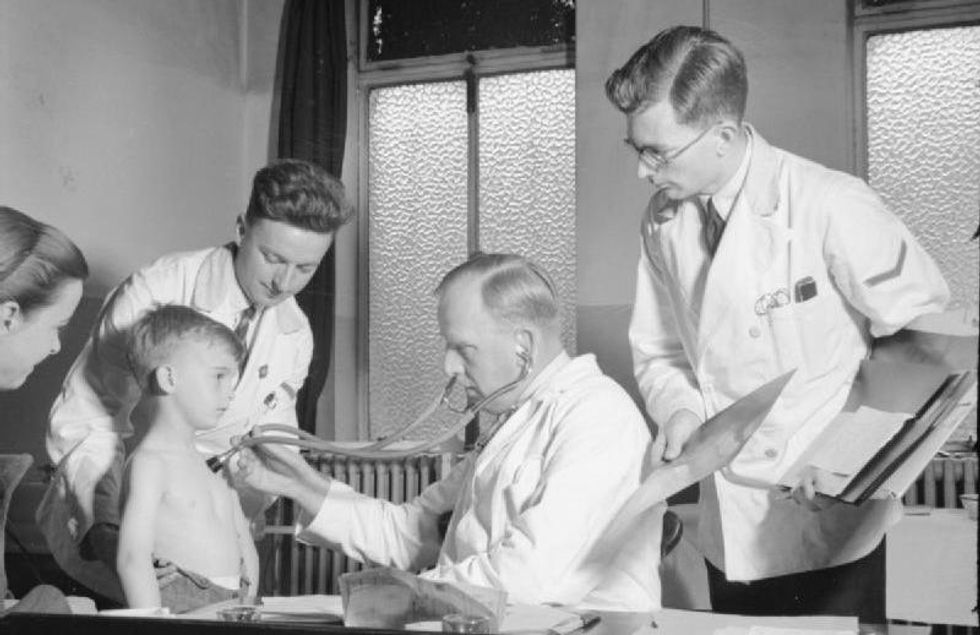 What is the real problem with America? Well, according to Trump idiot Rev. Jesse Lee Peterson, it is a lot of things. In what appears to be some kind of weird ass post-modern poem, the right Rev. Peterson tries (I think?) to make the argument that a loss of masculinity and the ability to "self-govern" is at the heart of all the things he thinks is wrong with America.

Here’s a question for Americans: Are you self-governed?

Many can see our country has lost control. Yet how many realize that they themselves have lost control?

The media, government and educational system divide, destroy and lie to the people, yet pretend to care about us.

The government pushes homosexuality and transgenderism even on our children and soldiers.

We get what we deserve by allowing them to do it.

This is how his essay starts out, and it only gets more confusing from there. I am really stuck on the part about "elites" promoting feminism, secularism and socialism, because if the elites are in favor of those things, then why can't we have them? Why would an "elite" want socialism? That's kind of like, the opposite of even having elites? Am I an elite? If so, where is my monocle? Are lizard people elites? Is that what we are talking about? I am confused!

The untrustworthy mainstream media and government pretend to combat “fake news” and seek to shut down anyone exposing them.

Do you hate what’s going on? Most do.

Who are these real victims? Real victims of what? What is this guy even talking about? Well, apparently, all of this random stuff Jesse Lee Peterson is mad about has something to do with men just not being masculine enough these days.

Out-of-wedlock births are accepted by all races with no sense of shame. Women control men through sex, and men willingly use women for sex.

Many reject masculinity, and so reject God. The culture openly attacks and discriminates against men, as women and children go out of control.

I, for one, did not know that castration was part of the process for men looking to get their RN degrees, but apparently it is. Apparently, men being nurses is a real problem in this day and age, because that is a job for ladies only! As is parenting! And having emotions!

Who will take charge of this country, and start properly shaming women for having babies without being married? Who will bring masculinity back so that women and children will be more easily controlled? Who will stop men from going to nursing school?

Donald Trump, that is who! Because he is super macho and also a lot like Jesus!

Have you noticed one prominent man who is not pushed around by the world (nor apparently by his wife)? He’s seemingly not flustered by intense, continuous pressure and slander from all sides.

Because he is self-governed and masculine, and ladies don't tell him what to do, ever.

I believe Donald Trump is self-governed.

Some claim Trump is “angry,” “thin-skinned” or “unstable.” Do not be so quick to judge. He dominates the opposition with shrewdness and force of personality – and, unlike Obama – realness.

Many intellectuals despise Trump’s masculinity, and they talk tough against him. But all who oppose him fall by the wayside.

I don't know that it's so much his "masculinity" that anyone despises. I don't even really see him as particularly stereotypically masculine or macho, what with all that self-tanner he uses and all the whining. I watch a lot of Humphrey Bogart movies and am related to a lot of old Italian dudes, so I feel pretty confident that I know from whence I speak when it comes to machismo.

But Rev. Peterson insists he can pull this all off because he's macho, and that other people can't because they're not. Or something. He then explains that Trump is a lot like Jesus, who we can safely assume also totally hates male nurses.

Some emphasize that Christ was “humble and meek,” and mistakenly they assume unimposing and nice. They’re the same who claim Trump is “arrogant.”

Most do not know what true humility is, nor do they recognize their own arrogance in judging Trump.

A recent guest on my radio show defined the word “meek” in the Bible as having “strength under control.” This is what I see in Donald Trump.

Yeah, and I think you might be the only one.

For a "self-governed" person, Rev. Jesse Lee Peterson's personal happiness sure seems to rely a lot on what other people do with their lives. He just can't be happy if people are having pre-marital sex, if men are being nurses or stay-at-home dads, if men have emotions, if other people aren't Christians, if they don't like Donald Trump, if women want equal rights, if people are gay or trans, if they have babies out of wedlock, etc. etc. Why can't he just concentrate on governing his own damn self?