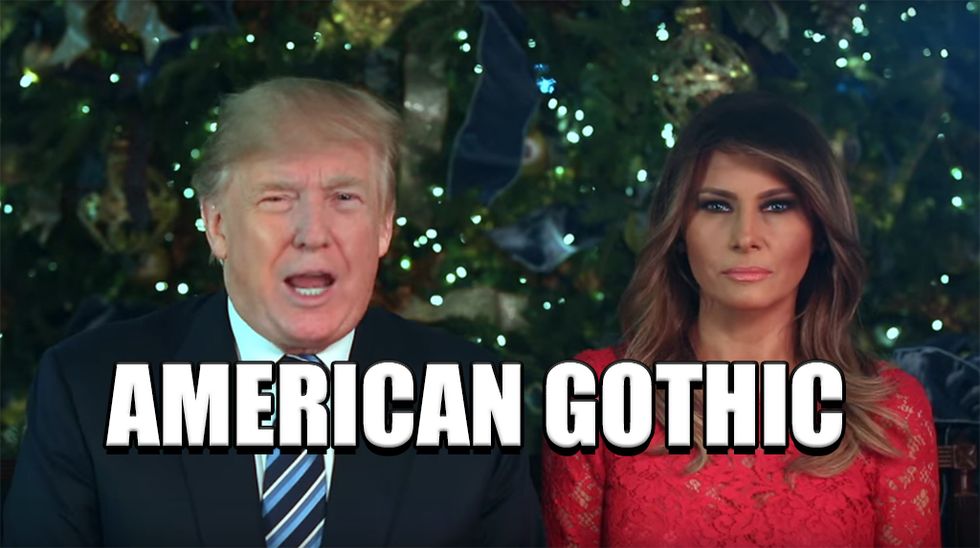 Happy Boxing Day, Wonketariat! Here's some of the things we may be talking about today, but first SEA OTTERS!

The Trump administration wants to dump billions of Ameros into missile defense systems that experts have long said are a waste of time, money and materials, and may not even work.

The US Mission to the UN announced a $285 million cut to the UN's "bloated management and support functions" so the US can go all John Wayne over everyone's ass.

Despite the bluster, misinformation, and Trump tweets, Republicans still can't sink the ACA. THANKS, OBAMA!

Just before Christmas, the Justice Department's Executive Office for Immigration Review sent out a memo advising judges to be cold, heartless bastards towards Messican children.

One year later, Trump's Tortilla Curtain on the Mexican border is a monument to the false promises and racism Trump spewed throughout the 2016 election.

While you weren't looking, the Trump administration was busy rolling back water and herbicide rules for the EPA, the CFPB prepaid card rules, and HUD flood mandates, and ratcheting up the trade war with Canada.

Democrats are going all out for the 2018 midterms as FEC filings show almost every House district will be contested, including areas that don't see much Republican opposition.

Provided Democrats can take the House, there's a quiet debate growing on whether or not to impeach Trump without any help from Republicans or Independents.

The special election to replace PA Rep. Tim Murphy is going to be a doozy as dreamy Marine veteran Conor Lamb squares off against a Pennsyltucky Republican who boasts that he "was Trump before Trump was Trump."

After the Senate nuked the nomination of Jerome Powell to head the Fed, Trump says he'll nominate Powell for Fed Chair again next year.

Neo-Nazi snowflakes are SHOCKED at reports from university brass bracing for violent clashes from anti-fascist students.

In a blistering editorial, The Salt Lake Tribune has bestowed on Sen. Orrin Hatch the 2017 Utahn of the Year award for his part in ruining Bears Ears and Grand Staircase-Escalante national monuments, the Trump/Ryan tax fuckery, and "His utter lack of integrity that rises from his unquenchable thirst for power."

Arkansas has been doubling down on alternative schools, offering oodles of resources and services for at-risk and special needs students instead of dumping them in some shitty old schoolhouse.

As the first openly gay person elected to Virginia's legislature, Dawn Adams has made loudmouth gay-hatin' hicks shut the hell up.

In case you forgot, the US is still fighting IS/ISL/Daesh/whatever in Afghanistan, and both US and Afghan forces are struggling to gain a foothold.

Amid reports from state news agencies that Russian is setting up a permanent military presence in Syria, about 40 Syrian rebel groups and military factions are giving the single finger salute to a Russian-sponsored peace plan that looks to subvert UN-backed peace talks, saying in a statement, "Russia is an aggressor country that has committed war crimes against Syrians..."

Alexei Navalny, the anti-corruption thorn in the side of Vladimir Putin, has been barred from the forthcoming Russian election. Navalny is calling for a boycott of the election, prompting the Kremlin to mull the legality of the boycott.

In light of additional Russian sanctions, Putin wants Russian oligarchs to launder their money back home.

In response to the US giving weapons to Ukraine in order to combat the Russian invasion of Eastern Ukraine, Russia's little green men are threatening war.

Spy agencies were warning of Russian troll campaigns for years, and had some plans to combat Russian fuckery and brainwashing with our own, but they were ultimately rebuffed by Obama administration officials.

Fox News is trying to out-crazy Breitbart, so they're spending many Ameros and Dollary-doos to further embrace Trumpkins.

The Trump version of the presidential challenge coin is the same gaudy and self-aggrandizing crap you'd expect from a man who loves to shower everything in gold. [h/t Boing Boing]

While fattening his ass like a Christmas goose, Trump interrupted an overpriced dinner at Mar-a-Lago to tell all the rich people, "you all just got a lot richer." Yeah, we know.

After trying to mislead courts looking to sue his ass into oblivion, Neo-Nazi Andrew Anglin has apparently been hiding in Ohio from a process server who promptly filed legal documents after eyeballing Anglin buying bro-tein shakes.

Michael Ferro, the primary shareholder for Tronc, gave himself a $5 million Amero X-Mas present just after a bunch of journalists were "You're Fired," but some cocktail napkin math suggests it's even worse.

An LA-based psychologist and American hero sent Steve Mnuchin a box of "pure organic" horse shit to thank him for his role in the Trump/Ryan tax fuckery, saying, "Is there a law that you can't drop off a box of poo? Not really."

And here's your morning Nice Time! A BABY KOALA!

We're 100% reader-funded, so how about showing us some love this Boxing Day by giving us money?