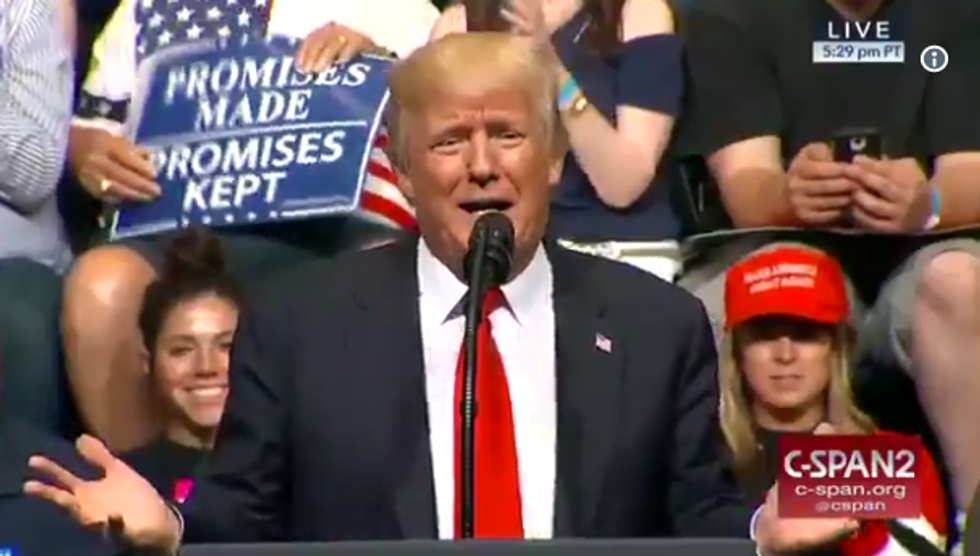 seen this show before

We don't know how to broach this subject, gentle Wonkers, but it seems President Donald Trump has said something stupid. At a campaign rally in Iowa (only weak loser presidents actually govern once they've been elected), Trump said a thing that is making thinking people say "THE FUCK?" but will only endear him to his idiot supporters even more. Trump said he said he doesn't even think poor people are gross (yes he does) but for big important jobs like Treasury or Commerce secretary, you really need a yooooogely rich person, because nobody understands money or business except for yoooooogely rich people.

Let's transcribe President Baby Hands, and annotate it with our own disrespectful commentary:

Remarkable clip from tonight where Trump explains why only rich people should be in charge of economic policy.

You appoint a rich person to be in charge of the economy! [Crowd of lower middle class Trump supporters laughs and cheers.] I said ... no it's true. And Wilbur [Ross] is a very rich person, in charge of Commerce. I said, because that's the kind of thinking we want! You know, really, because they're representing the country! They don't want the money, they're representing the country! [Or at least their fellow billionaires.] And they had to give up a lot to take these jobs! They gave up a lot!

When you get the president, this is the president of Goldman Sachs, smart! Having him represent us, he went from massive paydays to peanuts! Little tiny! [Trump has switched to talking about chief economic adviser Gary Cohn. Vanity Fair points out that Cohn is not taking a salary, but would be making the "peanuts" of $180,000 per year, which is more than most of the people at that Iowa rally could ever dream of making.]

I'm waiting for them [points at dirty lying media] to accuse him of wanting that little amount of money. They wanted that.

But these are people that are great, brilliant business minds, and that's what we need, that's what we have to have, so the world doesn't take advantages ofofofof ...

[Trump trails off momentarily. He is having fun, but maybe he wishes he was back on Air Force One watching re-runs of "Property Brothers," because that is a thing they DVR on Air Force One.]

And the crowd cheered and cheered, because they know in their hearts that if Gary Cohn and Wilbur Ross have a lot of money, they must be Good People. It's not like Goldman Sachs ever was a key player in causing a worldwide financial crisis or anything. Maybe once Trump brings back all the jobs, they too will become Good People like Gary and Wilbur!

We are reminded of the time Trump told a Las Vegas crowd that he loves the "poorly educated." In that instance, the medias and the Wonkettes were like, "Do his supporters realize he's talking shit about them?" and his supporters were like, "YEW HEAR THAT, DADDY LIKES DUMB COUSIN FUCKERS LIKE US, TAKE THAT LIBTARDS!" And now Trump loves the poor people too, but they're not qualified to work for him, EW YUCK GROSS.

Now you might say, "But Wonkette, some rich people ARE smart at business and made their money honestly and therefore they are A Expert! On the other hand, some rich people are Donald Trump, who is actually really shitty at business and wouldn't have a pot to pee in if he wasn't a slimy motherfucker whose entire business model is fucking people over with other people's money. How is that A Expert?" Wonkette hears you, and Wonkette concurs.

At press time, Americans were playing their assigned roles reacting to this thing that would be a gaffe for anybody other than Donald Trump. "Morning Joe" is saying "OHMYGODOHMYGODOHMYGODOHMYGOD, THIS IS SO TERRIBLE, NUZZLE ME MIKA!" Wonkette is writing naughty jokes about it. Meanwhile, Trump's Iowa supporters are eating their traditional breakfast of Frosted Flakes covered with reserved ground beef fat, basking in the afterglow of the Trump rally last night, relieved to finally have a president who TELLS IT LIKE IT IS and SHOOTS STRAIGHT FROM THE HIP.

To read more about Trump's Iowa rally, check out Maggie Haberman in the New York Times. Spoiler alert, but the whole thing was dumb as fuck.

Wonkette is funded by folks like you, because we ain't got no ads! If you love us, click below to fund us!