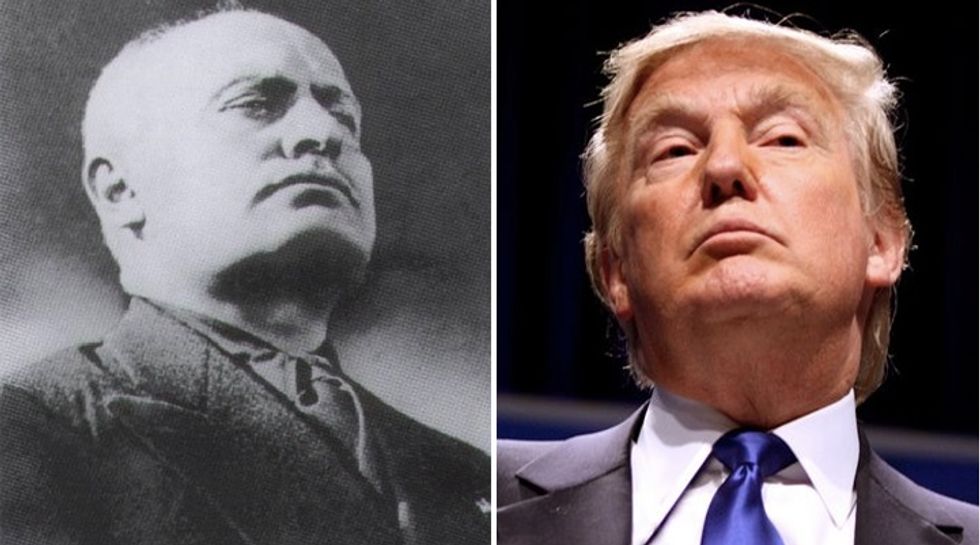 Trump's campaign rally in Las Vegas Monday night moved a lot closer to the Platonic Ideal of a Trump Rally, with several protesters being hauled out by security as the crowd called for blood. One Trumptrooper even let the excitement get the best of him and shouted "Sieg Heil!" as a black protester was dragged away.

[contextly_sidebar id="ejtoK1LOuftieNOpLbMYUpdXhkjVJSME"]Donald Trump is nothing if not predictable. He always escalates the crazy. One week he's calling for surveillance of mosques and enthusiastically explaining how getting Muslims into a database only requires good management skills, and then a couple weeks later he wants to ban all Muslims from the country. By comparison, his old insistence that the Mexican government is sending rapists and murderers across the border seems quaint and almost charming. So it goes with his campaign rallies: first it was just deporting a Mexican reporter for asking questions out of turn, then Trump agreed maybe a protester deserved to get roughed up, and now people go to hockey games hoping a Trump rally will break out. So far nobody's actually been lynched at a Trump campaign event, but there's still plenty of time before the Iowa caucuses.

Buzzfeed's McKay Coppins was there for all the crazy, which started only minutes into the event. Some gun control advocates started shouting while Trump brought a supporter onstage to tell the story of how her son was killed by an illegal immigrant, thus proving illegal immigrants are mostly murderers when they're not doing the raping. The protesters were dragged out by security, but not before the crowd got its money's worth of entertainment:

And about ten minutes into the Trump rally, this happens. pic.twitter.com/65pXHjsJ3x

By the time security swooped in, several amped-up Trump supporters had already encircled the protesters — booing, and chanting, and slowly closing in — while a crush of smartphone-wielding media scrambled to capture footage of the clash. The guards managed to remove one protester, but the other resisted, stiffening his limbs and screaming about the First Amendment as they tried to haul him toward the exits. When he toppled to the floor, a horde of rallygoers assembled to hurl insults and threats at him. “Light the motherfucker on fire!” one Trump supporter yelled.

Coppins was also able to capture the "5th or 6th scuffle to break out" on his own cellphone; minor riots were conveniently positioned all around the hall so everyone could get a look:

This is the 5th or 6th scuffle to break out at Trump rally between activists and security (w/ Trump fans cheering) pic.twitter.com/sxL2OnZg2g

While Trump rallies have always felt like a political stump speech given during a WrestleMania match, Coppins noted a marked escalation Monday, maybe because for Vegas you have to have a really yooge spectacle:

Reporters who regularly cover Trump said they had never seen anything like the fevered, frenzied mood that gripped the ballroom in Las Vegas.

It sounds like all the rally was missing were some torches and marching music, or perhaps to emphasize that Trump is the biggest Christian ever, a prominent display of a cross, lit up with kerosene so everyone could see it real good. The crowd certainly enjoyed each ejection of a protester:

“Kick his ass!” yelled one.

“Shoot him!” shouted another.

When a white activist proclaimed “Black lives matter!” as she was being carted out of the building, a male Trump supporter leaned toward her and snapped, “White lives matter.”

Sadly, the crowd was unable to reach a consensus on whether to shoot the guy or kick his ass, so instead he got away unscathed. Really, they should work these things out in advance.

MSNBC reporter Benjy Sarlin heard one Trumpista shouting, as another protester was taken away, "He's a Muslim guy! He's a Muslim guy!" See? Having them wear a yellow crescent on their sleeves really does make identifying them easier. An NBC camera also caught a nice fellow screaming "Sieg Heil," because what the hell, it's only reality TV anyway:

NBC News dutifully notes, however, "The man was far enough from the stage that it was unlikely Trump heard that remark." Trump didn't worry too much about trying to calm down the crowd, because why would he want to do such a thing? Instead, he poked them with a verbal cattle prod just to make 'em jump more:

“This is what we should have been doing to the other side for the last seven years!” Trump exclaimed during one of the scuffles with protesters.

At several points, Trump berated the reporters in the room for taking pictures of the clashes. “They are terrible!” Trump hissed of the press. “The worst!” Hundreds of riled-up Trump fans turned to face the press corps, and booed loudly.

A fine time was had by all, except perhaps for a few wussy parents who Coppins saw ushering their kids to the exits, and "some elderly people [who] had to leave in search of medical assistance." Fortunately, Trump himself was in tip-top shape to rouse the rabble all night long, since he's the healthiest man in America.

After reports of the youthful high jinks began making the rounds on Twitter, Trump supporters took to the social media platform to accuse Coppins of having shouted "Light the motherfucker on fire" himself to make them look bad:

Heaven knows Trump supporters would never behave in such an undignified manner. They agree that anyone who says they would should be taken out, beaten to a pulp, and left to die in an alley.

Yr Wonkette is looking forward to tonight's debate on CNN, where it's rumored Wolf Blitzer will offer Mr. Trump the opportunity to bite the head off a live chicken, and Ted Cruz will enthusiastically volunteer to do it for him.