Try California Senator Dianne Feinstein for Treason Because These Signatures! 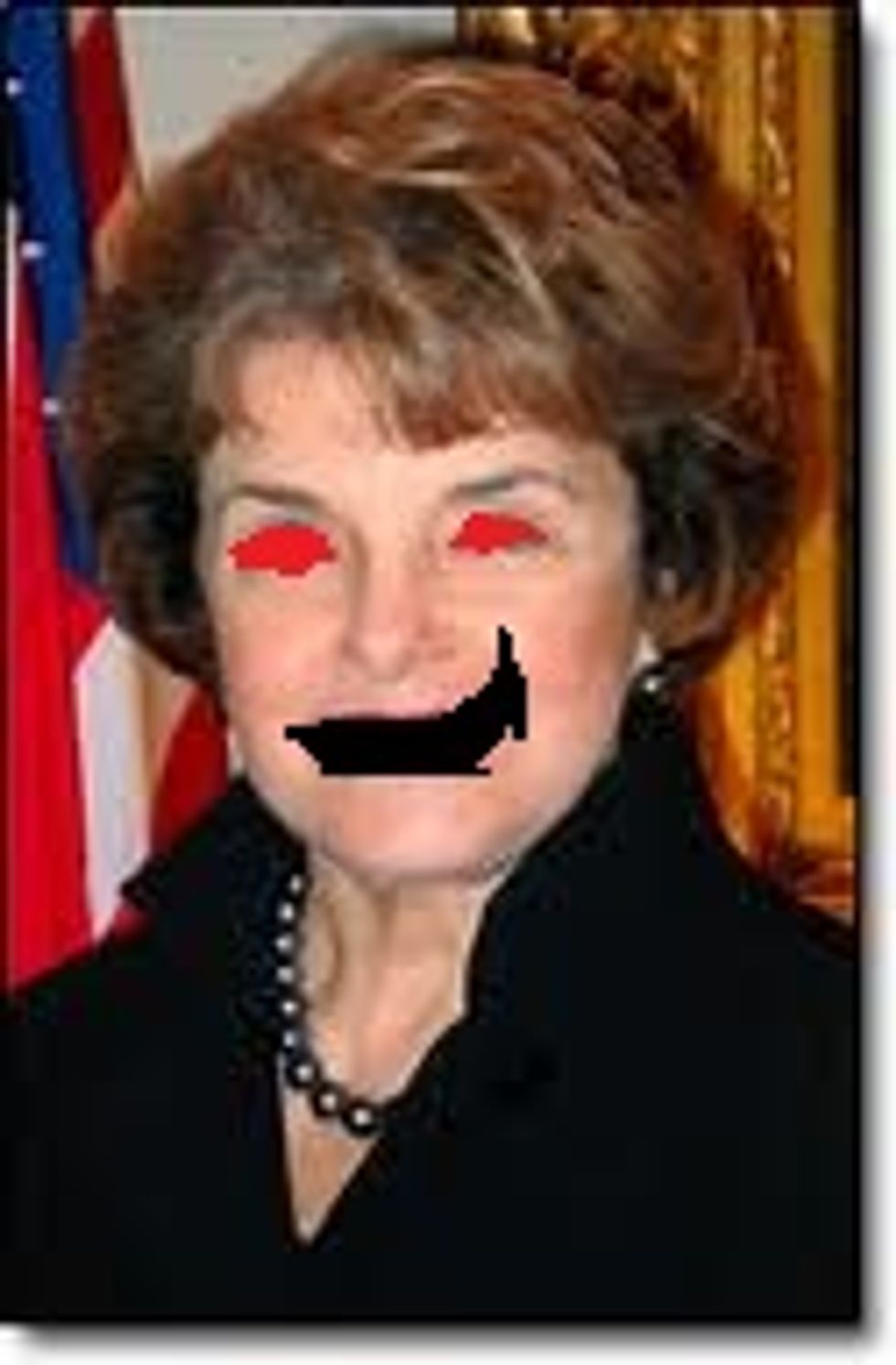 Wanna hear the latest steaming pile of stupid slop from the heartland of American Crazy?There's a White House petition to try California Senator Dianne Feinstein for treason! Senator Feinstein has been selling U.S military secrets to Mexican cartels, who plan on widening trafficking lanes by confronting America's armed forces and no really this is not a joke SHE JUST INTRODUCED SOME LEGISLATION. That does seem like it calls for the ultimate treason penalty of death, because GROBBLEFLURMENSTARM.

Here is a darling excerpt from the petition, posted to Whitehouse.gov on Thursday:

"Senator Dianne Feinstein has made it clear she does not believe in the Constitution or the inalienable rights of Americans to keep and bear arms. She is actively working to destroy the 2nd amendment with her 2013 assault weapons ban. For this reason we the people of the united States petition for her to be tried in Federal Court for treason to the Constitution."

In addition to not understanding the 2nd Amendment, Feinstein must have not read the asterisk under the Bill of Rights which explains that freedom of speech does not apply to any speech related to the contents of the Constitution. So, for example, you're allowed to say something like, "Our President is a Muslim and I can't wait until Joe Biden has to step in, if you know what I mean," but not, "I think we need to discuss making changes to the 2nd Amendment that reflect modern society, as we've done with other sections of the Constitution in the past." See, saying that first quote is Freedom, and uttering the second is UNCTUOUS TREASON.

The legislation proposed by Senator Feinstein is particularly treasonous because it would force gun owners to admit they own guns (what will they want us to register next - our cars?) and they'd have to submit information to help authorities keep track of their guns. Oh, and it's kind of like something Hitler did, although he also wore pants and loved vegetables, so perhaps a few hundred million more petitions are in order?

Though she isn't the first or only prominent public figure to call for such measures, she is a woman and she is from California, so targeting Feinstein for federal treason charges seems logical and appropriate. Citizens excited by the prospect of seeing that nosy Californian Nanny finally get hers shouldn't get too excited - as Prison Planet's Paul Joseph Watson mentions, the White House "cherry picks" which petitions reaching the 25,000 signature threshold it responds to, because the White House is insensitive to important issues like legislators introducing legislation for democratic acceptance or rejection.

Oh boy, remember when, for like one second, someone did something kind of cool with the White House petition feature and tried to label the Westboro Baptist Church as a hate group? Oh well.