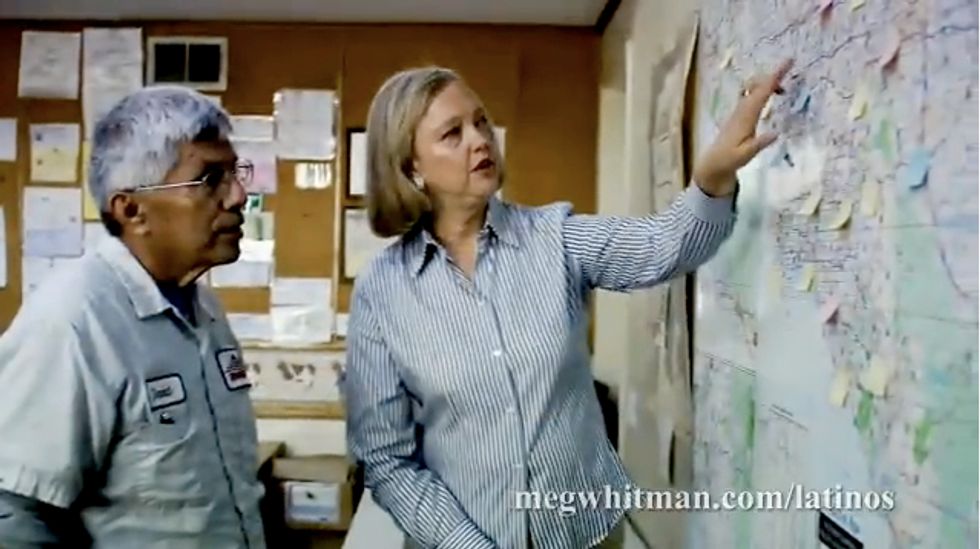 WHAT? Speak American! Meg Whitman has decided to court the Messicans in her race for California governor, and here is her first ad. It airs today during a soccer match, so apparently she's trying to get the gay vote too. What is being said? WE DON'T KNOW, WE'RE AMERICAN. So here's an attempt to figure out what's being said by what's going on in the video.

Whenever Meg Whitman wants to know about gardening tools, she consults the Hispanic community FIRST.

Meg Whitman loves children and as CEO of eBay had the privilege to see many of them auctioned off.

Meg Whitman once had a Chihuahua, like many Hispanic people. It was named Pepe and made this face all the time.

"This opone got laid in Arizona."

In this election you have a choice: Meg Whitman and suave Hispanic businessman or grinder thing and keyboard. Only one ticket has what it takes to lead California.

She has boobs. This undocumented Hispanic construction worker knows what I'm talking about!

Meg Whitman and her girlfriends are fans of well-known Mexican-American singer Selena Gomez. Here they are before heading out to her concert!