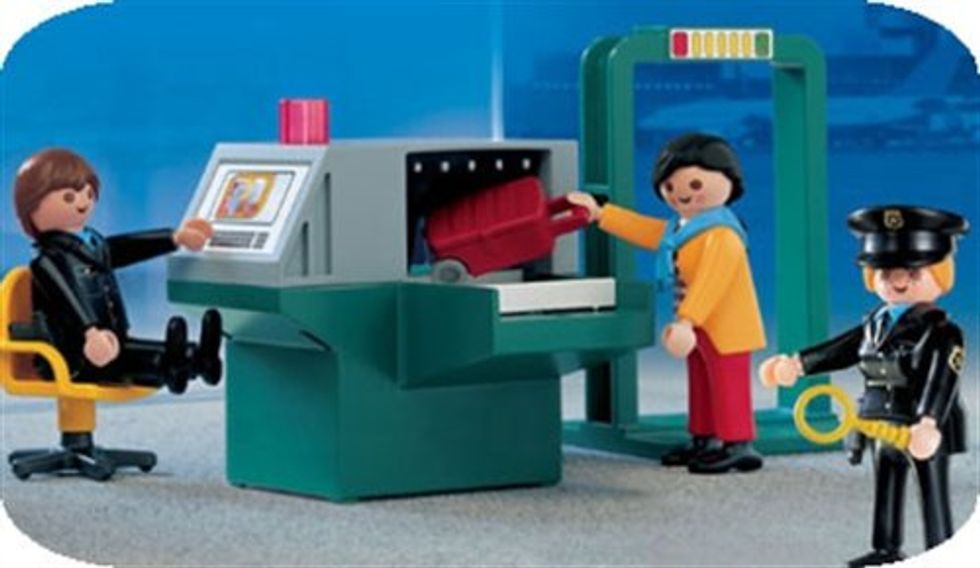 Not entirely sure how widespread an outrage this is, but the TSA has apparently found some new ways to make air travel just a bit more awful: When Washington DC resident Ashley Brandt was preparing to return home from a Presidents' Day weekend visit to Arizona, the TSA agent at the security checkpointwasn't altogether certain Brandt's phony-baloney photo ID was from a real part of U.S. America:

an agent with the Transportation Security Administration took a look at her D.C. license and began to shake her head. “I don’t know if we can accept these,” Brandt recalled the agent saying. “Do you have a U.S. passport?’

Brandt was dumbfounded, and quickly grew a little scared. A manager was summoned, she says. “I started thinking, ‘Oh my gosh, I have to get home. Am I going to get home?’

The supervisor said, "Yeah, we accept those," and Brandt made her flight without any trouble. BUT! Turns out that the TSA agent may simply have been following the rules just a little too literally: You want to fly, you need a valid state-issued I.D. And is this "District of Columbia" place a state? Now is it, hennnggghh?

“She didn’t seem to know that it was basically the same as a state ID,” said Brandt, who had only recently traded her Maryland ID for one from the District. “D.C. is obviously not a state, but I didn’t ever imagine it would be a problem -- I mean, the whole population of D.C. has to use these.”

So it sounds like this was just one weird isolated incident of a kinda dumb TSA worker who just doesn't know that DC is a real place. Except that after they got on the plane, Brandt's boyfriend took to the Tweetonets, and sent out a message to a waiting world:

“Holy. Shit. TSA @ PHX asked for gf’s passport because her valid DC license deemed invalid b/c ‘DC not a state.’ ”

And by the time they were back home in DC, a whole bunch of people had also tweeted their tales of TSA dumb, with similar stories of trying to board flights with licenses from exotic foreign lands like Guam or Puerto Rico -- and then there were more stories in the Washington Post story's comments, like the woman who had a similar problem flying out of San Francisco; again, the supervisor cleared things up, but not until after the woman had tried to explain that the District of Columbia is the city where the White House and the Capitol are:

it seemed like a light when on in her head.

She called for a supervisor, and then said, "so, you're from the state of Washington?"

The supervisor showed up a minute later and let me through.

Just to add one more bit of confusion, the TSA's website lists 15 forms of "Acceptable IDs," and the line for driver's licenses does say

Nothing there about weirdass "Districts" or "Territories." Thankfully, no nitpicky TSA agents appear to have asked for help with flyers from the Commonwealths of Kentucky, Massachusetts, Pennsylvania, or Virginia.

But just to be on the safe side, the TSA did issue a statement Wednesday clarifying that "A valid Washington, D.C., driver’s license is an acceptable form of identification at all TSA checkpoints."

Crisis: Averted. Suspicions that vast numbers of Americans are still unable to locate their nation's capitol on a map, much less the Iraq and such as: Confirmed.