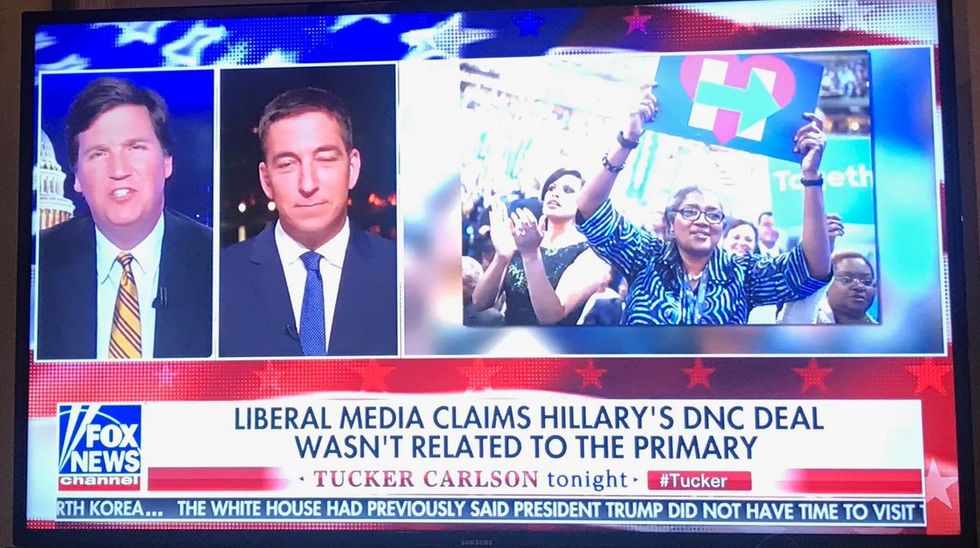 What a joyful night we just had! We have had TWO DAYS in the last two weeks that can actually be called good news days (the first one was INDICTMENT DAY, duh), and we are near orgasmic from all the joy, considering it had been a good year before that since we've had anything a sane and moral human could call "good news." Because we love ourselves and don't like letting people like Sean Hannity and Tucker Carlson shit on our joy, we did not watch Fox News last night. We did see on Twitter multiple times, though, that Fox was ... not covering the Virginia election? Just like they did their best not to cover INDICTMENT DAY? They obviously pull this kind of crap because it really hurts their business model to tell the barely breathing human pork chops they call their "viewers" what's actually going on the world.

That picture above was tweeted by Megan Garber from The Atlantic, who said, "Meanwhile, on Fox News, the Clinton presidency is dealt another blow," and we cannot stop laughing. It is Tucker Carlson and "progressive" Glenn Greenwald, two garden variety shitheels, doing their fucking damnedest to make the story still about Donna Brazile and DEMS IN DISARRAY. Hell, Donna Brazile was interviewed on MSNBC last night, and Donna Brazile still was not the story.

(As to the headline, if you don't know what "horseshoe theory" is, look it up. If you don't know what "two guys, one horseshoe" might refer to, well you see one end of the horseshoe is up Tucker's butt and the other one is up Greenwald's butt, and we have no idea how they got in that position except to say where there's a will, there's a way. Anyway, that is your GOOD MORNING MENTAL IMAGE from Wonkette!)

At that point, the Virginia gubernatorial race had been called, lieutenant governor and attorney general may have been called, and it was clear Dems were in the middle of doing an electoral bloodbath to the GOP in the Virginia legislature. Obviously there was no election news for Fox to report!

Hannity went ahead and contributed to the fullness of the Fox election coverage as fucking Tucker handed off to him, and it consisted of six seconds of him saying it doesn't matter what happened in Virginia or New Jersey, because Trump didn't win Virginia or New Jersey, wearing that thin-lipped scowl he's known for. Afterward, we imagine he removed the Trump-flavored buttplug from his ass and put it back in his mouth so he could spend the hour sucking on his made-up Hillary uranium conspiracies:

Hannity doesn't appear to be planning to cover the Virginia election at all. This was it. It lasted 6 seconds. pic.twitter.com/AnpvcicXMT