Tucker Carlson Now Being Gross And Weird About The Jews 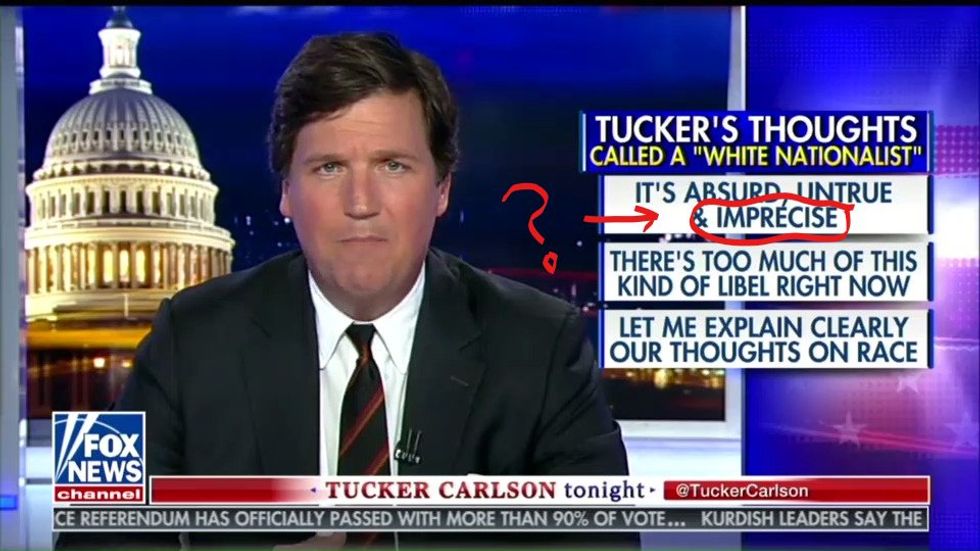 Bloated racist Tucker Carlson has always been very very famously racist (and homophobic). He's so gross about black people that JOE SCARBOROUGH yelled at him. He's a FUCKED UP sexist. He copied Hitler's notes about GYPSIES for God's sake. He got mad at THE DICTIONARY for calling him racist.

That was actually Carlson's protege and employee and cut-rate Andrea Peyser scold Betsy Rothstein who yelled at the dictionary, and now she is back to bring greater glory to Carlson and his internet home for actual nazis, with this, a video of a Jew (in this case the New York Times's Glenn Thrush) saying "chutzpah."

The Daily Caller's original caption for its since-deleted video was "Watch Glenn Thrush display his linguistic and intellectual superiority." OH THOSE SUPERIOR JEWS.

Rothstein, who arrived at the Daily Caller after getting her last outlet sued for defamation and posting bizarre "jokes" about Asian women, really has a handle on what is "funny" and also "being racist as fuck."

“I was in awe of @GlennThrush 's perfect pronunciation of the word ‘"chutzpah’" and thought it would make for a funny video. So I asked for it,” Rothstein, who pointed out that she is also Jewish, wrote on Twitter. “I have a rapport with @GlennThrush and felt certain he'd find it funny as well. It was in no way intended to mock his religion.” She said she called Thrush this afternoon and they laughed about the whole thing.

“The whole thing was meant to be funny and lighthearted — which are two things Washington is severely lacking right now,” Rothstein added.

Yes, it's definitely Washington's fault that all these superior Jews can't take a joke.

(SIDE NOTE! Betsy Rothstein does not really understand "what is joke." Here she is wishing us happy on our wedding day:

She [ME!!!! -- ed] joked about the probabilities of her child having Down’s Syndrome just because that‘s something to laugh about.

And here is what we actually said when we announced our pregnancy very slightly earlier the same year at age 41:

What about Down syndrome and whatnot? For real, you are pretty old.

Could happen! Then we will have a baby who loves everyone. Down syndrome kids are the best!

Tucker Carlson objects to be being called a "white nationalist" because it is "imprecise" ? pic.twitter.com/wKYPxXzhqG

Anybody else need him to "explain clearly our thoughts on race"? Didn't think so.