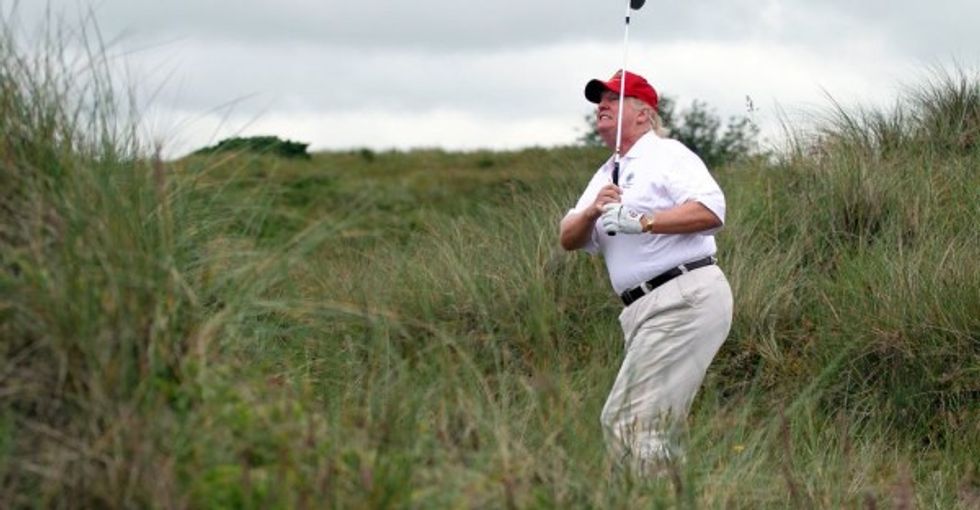 There has never really been any doubt that Donald Trump is the king of hyperbole. Telling everyone he is the very best at business is his actual #brand, even though his corporate empire has had to avail itself of the protections of these here United States' corporate bankruptcy laws more than anyone else in the last 30 years, which is typically not the hallmark of success, we think?

Trump has always hand-waved his bankruptcy problem away, however, by pointing out that filing bankruptcy is a shrewd business decision that allowed him to do "a great job for my company, for myself, for my employees, for my family." Well, that is technically true in that having one of your companies file bankruptcy every time you don't feel like paying off your creditors does ensure that more money stays in the pocket of one Donald J. Trump. That is a sub-optimal solution for anyone not named Donald J. Trump that might have been foolish enough to do business with the Trump empire thinking that they would get paid, but everyone knows those people are huge losers. Sad!

The bankruptcy stuff has been kicking around for awhile, of course, but over the weekend we got a peek at the Donald's charitable donations, because Trump has been assuring us all that he is the biggest classiest donater (yeah, yeah, we know that isn't a word, but we bet Trump thinks it is) ever. Turns out that, like everything else about Trump, his charitable giving is all hat, no cattle.

Since the first day of his presidential campaign, Donald Trump has said that he gave more than $102 million to charity in the past five years.

To back up that claim, Trump’s campaign compiled a list of his contributions — 4,844 of them, filling 93 pages.

But, in that massive list, one thing was missing.

Not a single one of those donations was actually a personal gift of Trump’s own money.

Let's be honest. Does this really shock anybody all that much? We always sort of assumed that to the extent any charity received coin from Trump, it was because he demanded his employees donate, or he robbed little old ladies on street corners, or something similarly terrible. Turns out that he isn't even that invested in pretending to give away money. In fact, he doesn't even typically give money.

[M]any of the gifts that Trump cited to prove his generosity were free rounds of golf, given away by his courses for charity auctions and raffles.

That is a highly attenuated way of defining charity, right? You make one of your corporate entities give a thing (one which is not actually a thing that costs them any particular money to create) to a charity so they can raffle it off to another rich white person who needs a tax write-off. On the one hand, it's not exactly alms for the poor, but on the other hand, when's the last time you saw Taker Socialist Bernie Sanders donate even one measly round of golf, huh??

Lots of times, the entity doing the donating is Trump's eponymous foundation and Trump doesn't really get around to funding his foundation in the first place.

In addition, many of the gifts on the list came from the charity that bears his name, the Donald J. Trump Foundation, which didn’t receive a personal check from Trump between 2008 and 2014, according to the most recent public tax filings. Its work is largely funded by others, although Trump decides where the gifts go.

Well, if there is one thing Donald Trump is probably the very best at, it is determining what to do with other people's money when there is little to no consequence for Trump himself. Let's not forget that he's also pretty convinced that everyone is as in love with him as he is with himself, and is dying for any interaction, however shabby, with the Big Man.

Trump listed a donation to “Serena William Group” in February 2015, valued at exactly $1,136.56. A spokeswoman for the tennis star said she had attended a ribbon-cutting at Trump’s Loudoun County, Va., golf course that year for a new tennis center. But Trump hadn’t donated to her charity. Instead, he had given her a free ride from Florida on his plane and a free framed photo of herself.

What the ever living fuck is Serena Williams going to do with a framed photograph of herself? Do you think Serena finds pix of Serena hard to come by? And we'll bet dollars to donuts that this is not the first time the world's top-ranked female tennis player has gotten a free plane ride.

The rest of the WaPo piece is a depressingly deep dive into what it means to be super rich and super craven and how you can basically build a great reputation, at least among the more gullible, as a mighty philanthropist without really giving anything at all away. You have to admit, that's a sort of a grifty bit of genius in its own right.