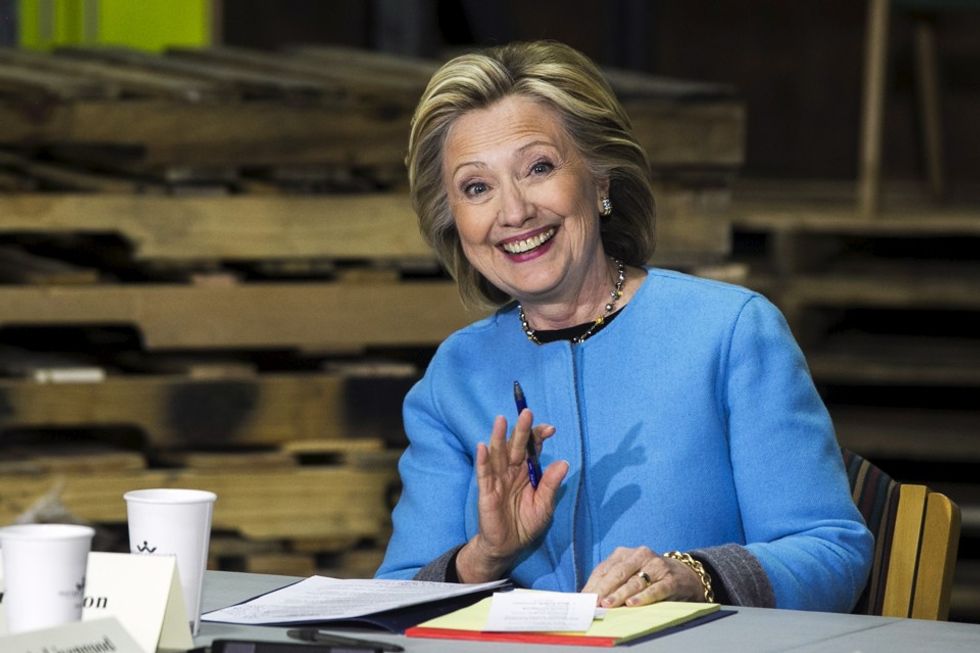 It is HillaryClintonDay and all the neoliberal shills are so scited! They are like, touch us with a Bad Touch, Hillary Clinton, we are wearing vagina hats and are into you in a sexual manner! They are tweeting things like this picture of a Union Square Barnes and Noble

and pictures of "look Hillary Clinton sent us pizza, nom nom nom!" Aw, that is cute!

When @HillaryClinton sends you pizza... https://t.co/RJdXSR5Pan

And then Hillary Clinton herself was all "emoji" and "I know youngs eat delicious pizza because Gawker once spent HOURS determining how much campaigns paid for pizza, after it decided it was going to eat Wonkette's 'politics' lunch, what, Wonkette is still here? Nobody saw THAT coming."

So that was cute! We wouldn't have known about it without this nice Mashable post, Hillary fans were sent pizza by none other than Clinton herself. Thanks Mashable! Cute!

And here is how Mashable ended its cute post:

How nice of her to selflessly send pizza to the shivering masses. No ulterior motive there, no sir.

On the other hand, who cares about ulterior motives when you have a pizza.

We still liked that birdie though!

The 19 Books Hillary Clinton Should Write Next

Hillary Clinton should write a book every year. One on videogames and one on sports and one on how only she understands The Doors.

Hooray, we have a nice new excerpt to read!

You guys, Mashable figured it out. Hillary didn't just send pizza because she has more money than God and it was a cute, sweet thing to do. She did it SO PEOPLE WOULD LIKE HER. You know, the people who are sleeping on the sidewalk the night before her book reading like they are waiting for tickets to Smashmouth. Those people, who are camping out for her book reading, PROBABLY were fair to middling on her at best until she sprang for the extra pineapple.

Here are some important questions we have pondered lately:

Why is Hillary Clinton walking in the woods when she should be leading the Resistance?

Why is Hillary Clinton trying to lead the Resistance when she should shut up and go walk in the woods?

Why won't Hillary Clinton explain all the ways she was bad in the campaign?

Why is Hillary Clinton trying to write a book about the campaign?

Why is Hillary Clinton such a bitch?

And now, in a post dumb enough Chris Cillizza could have written it, why is Hillary Clinton so selfish and corrupt?

We mean this in an ungendered, British sort of way: some people just are silly twats.

Buy Hillary Clinton's book here and Wonkette gets like a penny! Wonkette is bought and paid for Shills For Hillz, except for the paid for part. You, reader! Pay us!