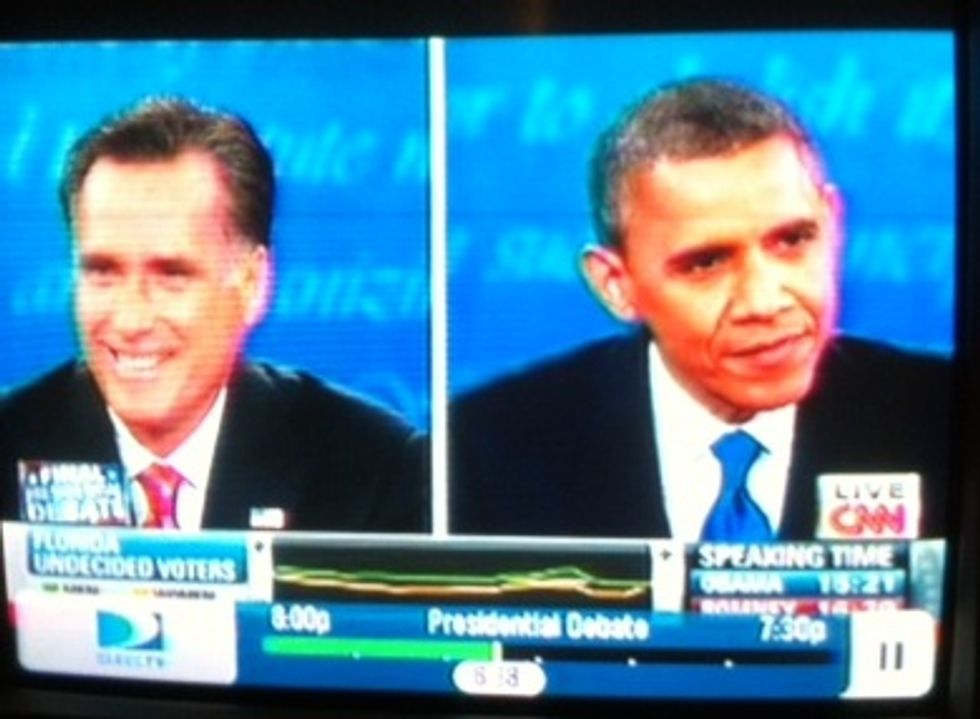 Greetings, Wonkers, and welcome back to Wonkette’s State of the Art LiveBlogoPlex for the final Debate-O-Palooza of the 2012 Presidential campaign! Your Editrix and most of the Wonkette staff are standing by via the Top Sekrit Wonkette ChatCave for what promises to be a thoughtful and nuanced discussion of the many subtleties of international relations! Or maybe a lot of accusations and lying, it could go either way.

So many questions! Has Obama agreed to talk to Iran if he's re-elected? Will Romney talk to Iran if he wins? Are either of these guys still on speaking terms with each other? Will moderator Bob Schieffer be able to rein in either candidate, or will Mitt cold-cock him with a solid bar of gold? Which Barack Obama will show up tonight: the sleepy dude from the first debate, the feisty smart guy from the second debate, or a third, as-yet unknown Obama, some hybrid narcoleptic street fighter who throws a verbal jab and then morphs into a giant robot...which then falls asleep? And what are the implications for our relations with Brazil?

While we wait for the debate, let's review some fundamentals of foreign policy, with the man who taught us everything we know about the topic:

8:55 We have been preparing for the liveblog tonight by spending the last week and a half doing online scoring for the essay portion of the SAT's. The group that we have been reading is responding to this prompt:

Should we care just as much about people in other countries as we do about people in our own country? Plan and write an essay in which you develop your point of view on this issue. Support your position with reasoning and examples taken from your reading, studies, experience, or observations.

The reason we mention this is as a reminder of just how much average Americans understand about foreign policy (or anything else). In the past 10 days, we have learned the following (mostly verbatim, with some reconstructions):

And from a kid who went on to write a heck of a good essay,

We also have read essay after essay in which the students assert that the US entered WW II mostly for the purpose of stopping the Holocaust, which is a nice sentiment, but a little disconnected from real history. We also do not score down for factual errors, since we're supposed to just focus on organization and the existence, reality-based or not, of evidence. (Which one kid clearly knew about, since he wrote: "When Thomas Jefferson gave aid to all those in South Africa after the sea otter invasion, it was a gesture of good faith.")

What any of this has to do with the foreign policy debate tonight, we leave up to you, gentle readers.

9:00 "The audience has taken a vow of silence." But not celibacy, one hopes.

9:03 We are debating during the 50th anniversary of the Cuban Missile Crisis. This is very important, because we are painfully aware that neither of these men is a Jack Kennedy.

9:05 First question is about Libya -- talk about unexpected! Mitt knows the names of other African / Middle Eastern countries! Flawless victory! But he says we can't kill our way out of this mess? He just lost the Republican Base.

9:10 Barry is going to put Benghazi in context. Yes we got attacked, but Libyans don't need to be carpet-bombed, either, because they like us. Mitt has a laundry list of things that might help, but also, Al-Qaeda!!!! Second mention of Mali in 10 minutes!

9:12 "The Cold War called and it wants its foreign policy back" -- nice line, flat, rushed delivery. Barry! Don't step on your zinger like that!

9:13 Rebecca adds: that zinger was SO LAME, and Kirsten Boyd Johnson just laughed SO HARD. Have I already gotten her drunk??? (OK, so that's our Special Guest, who IS yelling at furniture already!)

9:15 They are arguing about Mitt's posture. He seems to be sitting up straight, though.

9:18 There is literally NOTHING funny about Syria, and probably little U.S. America can do about it... Mitt will plunge into suggesting we could fuck Iran over real good if we get the right government in there...and we won't get directly involved. YAY FOR CLARITY!

9:20 Since Syria is too depressing, we will pass on Rich Abdill's pre-debate fashion note: "The president's suit jacket doesn't have a vent but Romney's does — mayhaps because only one will be talking from his rear?"

9:24 Women finally get mentioned in the debate! They're Egyptian, though. Is Obama going to give them slut pills?

9:28 Mitt is unhappy that Obama didn't prevent the Arab Spring...by, uh, shuffling "our friend" aside more quicker? Huh? WE NEED TO GIT OUT OF DEBT AND SPEND MUCH MORE ON OUR MILITARY!

9:30 What is America's role in the world? Man, if only the students taking the SATs could brief the candidates....

9:32 It is now "strong America" time. Barry points out that we have allies in addition to Israel, a contention that may throw the fact-checkers into a tizzy.

9:33 Rich Abdill: "How does it look over on CNN? Have all the people with the dials gone to bed?"

Jesse Taylor: the people with dials are all gay married to barry

Rich A. I did not know sharia allowed that?

Rebecca S. Before he even says "the" the dials skyrocket

9:36 Blair Burke, our special FLOTUS Correspondent, has joined the Sekrit ChatCave: "I just turned this on...I'm glad there is still time to give the finger to the teachers' unions though"

9:38 Bob Shieffer thinks he is a moderator or something, and mentions "foreign policy." Mittens says he must speak. Barry must speak, too! It is a big pile of talking over each other!! What about the Navy and how will you pay for it?

9:40 Cutting Obamacare, which the CBO has projected will reduce the deficit, will save money, because MAGIC.

9:43 Here is Mitt's face, so very happy after he said "You got that fact wrong Mr. President" Sez Your Editrix: CAR SALESMAN FACE

9:44 Barry has thrown the Civil War Re-enactor vote out the window with his slander of horses and bayonets.

9:46 Is Israel part of America now? Fox News has a map ready to go that says it IS.

9:49 Mitt is in favor of crippling sanctions like the ones Barry has put in place. If elected, he will have the Doctor take him back to the Bush administration to put them in place sooner, and more crippling-er.

9:52 Barry's "you'd do what we did, but you'd have said it louder" isn't bad, but only partly zingy. It's no definition of what a submarine is.

9:55 Rebecca sez, "Can we get a Hillz shout-out? We're like an hour in to a foreign policy debate, and she's the most popular member of THE HUMAN RACE."

We just want to say, no, sorry, still Michael Jackson.

10:00 Did YOU go to Yad Vashem, Mr. Romney? It commemorates the victims of the Holocaust (Which the US joined WW II to stop, according to 11th and 12th graders)

10:01 Rebecca sez: "Point of personal privilege: during the GOP primary debates, all of them were like "I would be sabotaging Iran in secret," like Obama WASN'T. Like we weren't killing all those Iranian scientists."

Once again, we must reply, nope, that was still Michael Jackson.

10:02 Mittens, again with the "tumult." Why does it sound like Yiddish when he says "tumult"?

10:04 Did you see Romney's eyebrows just before the Afghanistan question? They were like 3/4 of the way up his forehead. What was that?

10:10 We will not divorce Pakistan. Don't you wish Newt had won the nomination? Then we could talk about having an open relationship with other countries.

10:12 We need to stop just killing people and move the world away from Islamic extremism. We should yell about Ground Zero Mosques and maybe burn some Korans, and then NOT APOLOGIZE.

10:14: Special Guest Furniture-Shouter Kirsten Boyd Johnston: Mitt is actually coming off as Sarah Palin, rattling off everything he's learned in the last 48 hours from Wikipedia. "The Haqqani network" and "they're PASHTUNS!"

(The Rule of 3 requires this: No, it's Michael Jackson)

10:19 Mitt thinks that we can be partners with the Chinese, who last week were despicable currency manipulators (Day One!). But we must be strong, so they respect us! "Your chinaman is like a high-spirited terrier in this, you must show him who's the alpha dog" .... is what Mitt is saying (but not saying.)

10:21 You know all about shipping jobs overseas, don't you Governor? BOOM!

10:23 Rebecca: "KBJ is VERY UPSET that Romney keeps talking about the sequestration as "Obama's budget." We have gotten her REALLY DRUNK. Any minute she is going to agree to model the NEW WONKETTE T-SHIRTS for pictures and such."

10:25 Again with the idea that GM could have found private funding for the bailout. Michigan and Ohio are listening. Also, investing in research is good. Investing in three companies I just named is bad.

10:26 (Dammit, KB Johnson, not Johnston. SORRY! Come back and write for us and we will spell your name right at least 47% of the time)

10:28 Mitt is pretending that he can feel empathy. And that Egg weeps. Brent Spiner pulled this off a lot more convincingly.

10:29 Rich Abdill: "I don't care what Romney's positions are — when he smiles I want to throw a rock at the TV"

10:30 Closing statements! They are... well, truncated stump speeches, really. Barry is doing the sincere and emphatic thing where he points at the viewer to show he means it, dammit. Mittens is karate-chopping the air for emphasis and telling us how he will get along with everyone. It is not a Huge Fail but not a huge win, either...and something something torch singer.

...feels like when i talked to my dad that one time"

10:36 Rebecca S: Like that Kiefer Sutherland movie FLATLINER, that is CNN's viewers on Romney

Rich A: But in the end Sutherland came back

(Ever heard of a "spoiler alert," Rich?) Also, no, that was Michael Jackson.

10:38 Rebecca: "HAHAHAHA KBJ: Who's this person who sounds like a football announcer? (IT IS CHRIS MATTHEWS! GUESS WHO DOES NOT HAVE TV!!!!)"

10:40 We have PBS muted, so whatever bland thing David Brooks is mouthing right now is going missing. So far, no callers to CSPAN have punk'd the call-in hosts. Rebecca notes: "Gergen thinks Romney passed the "commander in chief" test despite having his second loss in a row. Gergen thinks his LACK OF WARMONGERING helped him. Would probably help him more if he wasn't a warmonger"

The consensus is that Obama "won," but that "Romney held serve by just saying everything Obama said, with caveats" (Jesse), which we think is a tennis thing. MSNBC is rerunning the "apology tour" and "Whopper" reply...and Andrea Mitchell's fact-check just broke up in the lag on the webstream. We really should get cable some day.

There is still a day left in the SAT scoring project, so we had best get back to it. Goodnight, and remember to buy Old Handsome Joe Biden a Trans Am. kkkkkkk!