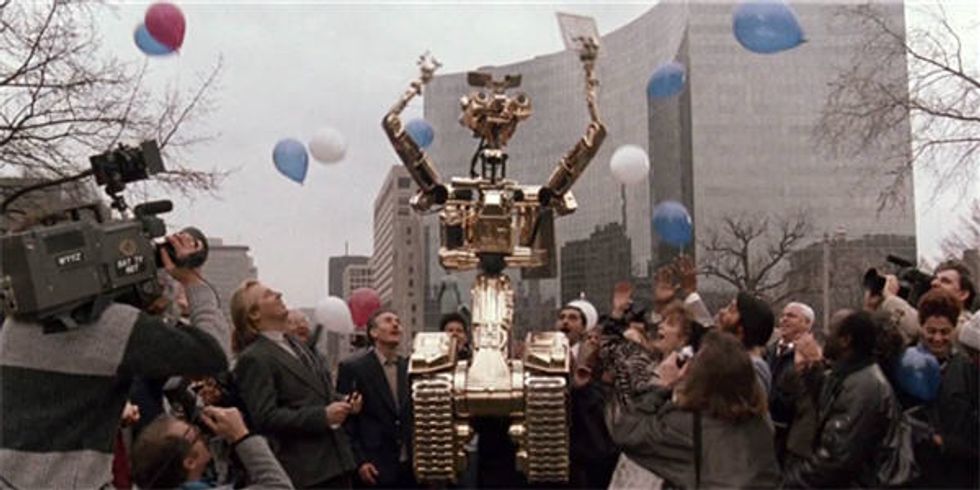 In its quest to be the largest company without a single "employee," Uber outsourced security at one of its San Francisco parking lots to a 300 pound egg-shaped robot.

While the robots aren't armed (yet), features include "multiple high-definition cameras for 360-degree vision, a thermal camera, a laser rangefinder, a weather sensor, a license-plate recognition camera, four microphones, and person recognition capabilities."

It's unclear whether the robot does as good of a job as its human equivalent, but what is clear is that you won't have to offer it benefits and it's not going to be calling in sick the day after the Super Bowl like a typically shifty American worker bee.

The robot costs about $7 an hour, so it's likely it will have to pick up an extra job to provide for bot wife and bot kids. Might I suggest a plucky little company that's always in need of independent contractors to fulfill its mobile application requests to drive gallivanting yuppies between mescal tastings?

Silicon Valley blood-testing darling Theranos and its CEO Elizabeth Holmes are having a rough year. It wasn't long ago when the corporate person pledged to revolutionize blood testing through its innovative testing procedure that enables it to perform testing traditionally done via intravenous withdrawal with only a pin prick and a couple drops of blood. To which big wig investors thought "great idea" and gave Theranos all of the money.

But as it turns out, the test results are coming back negative - and not the good "negative." On Thursday, Theranos announced that the Centers for Medicare & Medicaid Services Centers have banned Holmes from owning or operating a medical laboratory for at least two years, levied a civil monetary penalty and revoked the certification of its laboratory in Newark, CA. That's pretty serious stuff for a company that has been valued at $9 billion. Why?

Last year, regulators inspecting the Newark lab found "deficiences that could lead to inaccurate results, including inadequately trained employees and samples stored at the wrong temperature." But they were just being nice.

Authorities who reviewed its practices last year found that all 81 patient results they inspected were inaccurate in a test of blood clotting administered from April to September on patients who take the blood thinner warfarin.

All of the wrong! Combined with an ongoing Department of Justice criminal investigation into the company, the two year ban for Holmes marks a mighty bump in the road for one of Silicon Valley's brightest stars. Just last year, Forbes named her "America's Richest Self-Made Women" with a net worth of $4.7 billion. She's only 32. And yes, that might make you want to put some pants on and seize the day.

But as the company struggles to keep from drowning in a pool of its own poorly tested blood, it's fair to wonder why Theranos suffered the precipitous fall considering all of the geniuses associated with the company.

Theranos won backing from tech luminaries like the software mogul Lawrence J. Ellison, while the company counted Henry A. Kissinger, the former secretary of state, and the former Senate majority leader Bill Frist among its advisers and directors.

Hard to see how anything go wrong with the top notch advice of Fritz and Kissinger, or "Frissenger" as they would be known around the water cooler if any corporate person in Palo Alto were to employ such antiquated office gathering spots.

From the innovators of Silicon Valley to the sensational personal lives of Big Auto heirs. Local prosecutors in Grosse Pointe Farms, Michigan, will not charge Edsel Ford II, the 67-year-old great-grandson of Henry Ford, following a domestic incident with his wife Cynthia that put Edsel in the clink overnight earlier this week.

Weeks after a short divorce proceeding fizzled in a cloud of reconciliation, police were called to the Fords' residence late Monday night.

Police say Edsel Ford took away his wife’s cellphone as she tried to record the incident. That, along with “signs of a struggle,” were part of the reason he was arrested, [Police Chief Daniel] Jensen said. Cynthia Ford later was able to call 911 on the home phone, police said.

“The only evidence here is there was a sign there had been a physical altercation,” said Daniel Jensen, Grosse Pointe Farms director of public safety. “There was no knock-down drag-out battle here, but hands were placed.”

"The knock down drag out" standard for battery is a new one to us, but we're not law enforcement. While Cynthia asked authorities not to press charges and the prosecutor indicated no evidence was found that could provide a foundation for charges, is it fair to ask whether Edsel, a member of Ford's Board of Directors, received preferential treatment? Absolutely not, implies police chief Jensen who's merely a close friend and former bodyguard of Ford CEO Bill Ford Jr.

Nothing to see here. Please disperse.